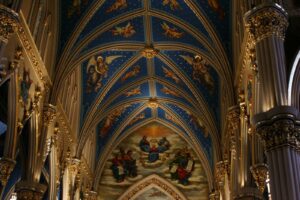 [Ed. Note. The ubiquity of scandal given by so-called Catholic universities is too much to recount here. One need only to surf the web, find a Catholic college or university and preview its lecture series, theological offerings, campus ministry departments or the general tenor of its university life. With only a few exceptions can one truly find that the reality accords with the “Catholic” moniker.

Thus, the Wanderer Forum Foundation, with the cooperation of St. Augustine’s Press, presents to you a sneak peek of Professor Charles E. Rice’s upcoming book Right or Wrong? This book, due out in Spring 2012, is a collection of Professor Rice’s essays for the Notre Dame student newspaper, The Observer, throughout his storied 40+ year career at Notre Dame Law School. A moral tale, the book–through the observant eyes of a law professor–chronicles the decline of arguably the premier Catholic university in the United States. Yet, it is a hopeful book as it not only squarely diagnoses the maladies at Notre Dame (which are metastasizing there and at other Catholic universities), but offers the cure for such–the teachings of the Catholic Church.

It is our pleasure to offer you what we hope will be the first of several such “teasers” to Professor Rice’s upcoming book. His words are as applicable today as when they were first written.]

[M]any at Notre Dame believe that adherence to Church teaching on moral issues is discretionary. One reason … is the failure of this ‘Catholic’ University to affirm the … clear obligations of Catholics toward the teachings of the Vicar of Christ.

The … principle here is truth-in-labeling, with its corollary … of full disclosure. You rely on that principle every time you pay $2.98 a pound [1993 prices!] for what the label tells you is ground round instead of $1.29 for the lowly ground beef. If the seller pulled a ‘bait and switch’ by labeling hamburger as if it were ground round, you could have a legal as well as a moral complaint.

[T]he recent history of American Catholic universities exemplifies the ‘bait and switch.’ Notre Dame attracts alumni donors and prospective students by affirmations of its ‘Catholic character.’ Yet Notre Dame professes an orthodoxy of openness which is inconsistent with that character. As the first sentence of the Notre Dame President’s Sesquicentennial Declaration put it, ‘Notre Dame’s first commitment is to freedom of inquiry and expression.’ In practice this … invites a process of endless inquiry, without norms of content, which obscures the obligatory character of teachings of the Magisterium.

Ex Corde Ecclesiae, the Apostolic Constitution on Catholic Universities, affirms the importance of due freedom in the ‘search for truth.’ But it also enumerates as one of the ‘essential characteristics’ of the Catholic university: ‘Fidelity to the Christian message as it comes to us through the church.’ And, ‘the institutional fidelity of the University to the Christian message includes a recognition of and adherence to the teaching authority of the church in matters of faith and morals.’

Christ is God and the Pope is His Vicar, the visible head of His Church on earth. Vatican II’s Dogmatic Constitution on Divine Revelation states: ‘The task of authentically interpreting the word of God, whether written or handed on, has been entrusted exclusively to the living teaching office of the Church, whose authority is exercised in the name Jesus Christ.’ (No. 10.)

That teaching office is possessed by the Pope and the bishops in union with him. (Vatican II, Dogmatic Constitution on the Church, No. 25). In his 1987 address to the bishops of the United States, John Paul noted that ‘there is a tendency on the part of some Catholics to be selective in their adherence to the Church’s moral teachings. It is sometimes claimed that dissent from the Magisterium is totally compatible with being a ‘good Catholic’ and poses no obstacle to the reception of the sacraments. This is a grave error that challenges the teaching office of the Bishops of the United States and elsewhere.’

More than two decades [this was written in 1993] of teaching Notre Dame alumni in law school lead me to conclude that Notre Dame undergraduates are shortchanged in that they are not afforded a predictable opportunity to learn what the Catholic Church actually teaches about itself and about the binding character of its moral teachings. What they do learn in this area is likely to be filtered through the lens of a hostile professor.

They can count on Campus Ministry to say some good things but rarely anything politically incorrect. And it is the maximum political incorrectness to assert that one agrees with the moral teaching of the Pope and that all Catholics are bound to give to that teaching a ‘religious submission of will and of mind.’ (Vatican II, Dogmatic Constitution on the Church, No. 25.) In truth, as John Paul II stated to the American bishops, there is no moral right for a Catholic to dissent from the teaching of the Magisterium.

Notre Dame raises money on the strength of its Catholic pretensions. Yet Notre Dame’s profession and practice implicitly legitimize and even exalt dissent from Church teaching. If its officials were held … to the labeling and disclosure standards that govern lesser mortals, including sellers of hamburger, they would need a lawyer.

It would be a constructive move to retrieve Ex Corde Ecclesiae from the dead letter file and make it the focus of the … campus discussions of the ‘Catholic’ character of Notre Dame.

This article, Bait and Switch is a post from The Bellarmine Forum.
https://bellarmineforum.org/bait-and-switch/
Do not repost the entire article without written permission. Reasonable excerpts may be reposted so long as it is linked to this page.