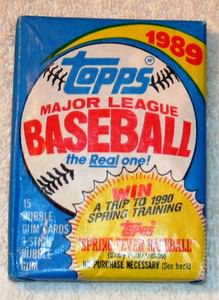 I recall finding out, to my horror, in the early 1990s, that Topps Baseball Card packages were no longer including their trademark brittle piece of gum that had been a mainstay of American boys’ youth since the late 1940s and early 1950s.  At the time, my card collecting days were over but they were not for my little brother who was around 10.  How could he be deprived of the joy and pleasure experienced by so many other boys?  This was tradition!  How dare the Topps Company take this away?  I recall uttering the words: “This is an indicator of the end of a civilization.”  While my prognostications of cultural decline were that of a high school student, it was curious that forces were coalescing at that time that seemed to indicate that the end was indeed near: the Clinton Presidency, MTV Spring Break, and hairspray-laced scalps of girls that doubled as antennae for homes that did not have cable-television.  That said, upon reflection 20 years later, the exclusion of bubble gum from baseball card packages serves as a metaphor for our cultural decline and a subtle war against–and certain disregard for–the most valuable resource of any society: children.

Historically speaking—as I understand—baseball cards were originally called “bubble gum cards.”  I first heard the term as it was uttered by Lucy in her dismissal of Beethoven’s prestige and fame to a horrified Schroeder in “A Charlie Brown Christmas.”  Apparently, the cards were actually inserted to bolster falling bubble gum sales in the late forties and early fifties.  (Thus, I am not naive to any purely altruistic motives of bubble gum companies.)  In any event, the relationship between baseball cards and gum was inseparable from the beginning.  Indeed, it was the same with the game.  Along with tobacco, sunflower seeds, hot dogs and cracker jacks, bubble gum and baseball go together like bacon and eggs or beer and pretzels.  But suddenly, in the early 90s, (business-)man put this asunder.

Boys in the early years of this divorce knew intimately the disappointment of what they were missing.  Indeed, I imagine there were protests from several quarters at the time, but over the years it became an accepted reality.  Memories of what had once been—the joy, the excitement, the childhood tradition–had faded with time.  Young boys today have no concept of that grand tradition of baseball card collecting in the same way that boys who grew up in the 1950s through the 1980s.   So why the sundering of bubble gum from baseball cards?  I don’t know the definitive answer, but I will make bold to speculate.  Given our cultural mores, perhaps my conclusions will bear out.

In the early 1990s, I suspect that the reason that the manufacturers stopped including bubble gum was simply the profit motive.  The folks in the board room probably had the discussion—as all businesses do—of how to cut costs and make more profit.  I’m sure that there were probably studies done and perhaps investigations undertaken to isolate where profit derived from.  We all know the result, get rid of the gum.  The paradox—at least in the case of Topps—is that the corporation was named the The Topps Chewing Gum Company, Inc., yet there was no chewing gum in one of their most popular products.  This raises several questions of a philosophical nature: (1) What is the purpose of a business or company?  (2) Is it founded to produce a product or provide a service or is it simply an arrangement to get profit?  (3) If the latter part of #2, does it owe any responsibilities to the public at large or the common good and how is it kept accountable?  (4) When is it acceptable to change the very nature of a company and how does one do it?

Another reason is the shifting focus of the target audience from children to adults.  In the early 1990s, one sees a shift away from producing bubble gum and baseball cards as primarily for the kids, and a turn to the collectors’ market.  In other words, the business had subtly taken a new approach—that of marketing towards adults.  The sports collector industry is big business and the bubble gum-baseball card companies saw this as a way to increase their profit.  Thus, by eliminating the costs associated with inclusion of gum and the possible imperfections that the sugary treat might place upon the cards, the manufacturer focused on the pristine nature of the cards and developing other “lines” of cards that would serve the collector market.

Traditionally it seems, boys would collect the cards—buying individual packs and hoping to get the players from their hometown teams.  They would trade with their friends, learn the stats of their favorite players, and use the cards of the no-name rookies as an “improvised motor” for their bikes, having affixed the card to the frame of the bike and letting the spokes hit them simulating the sound of a Harley.  Collecting cards was for fun—part of the excitement that every new spring brought in anticipation of the upcoming season.  Now, collecting is judged by how much a card is worth in monetary terms.  The focus—even for the kids today—is not fun, but rather how much a card is worth.  There is also no longer the excitement and anticipation of opening individual packs to see what players were obtained; today, in most stores, the full set is on display and for sale.  The immediate gratification of obtaining the whole set is sated and there is no self-limitation or excited anticipation of obtaining your favorite players. The virtues of patience and temperance seem to take a back seat.

Some may say that I am making too much of baseball cards and bubble gum.  Perhaps I am, but I think it is a metaphor for the cultural collapse that we see around us.  To a startling degree, the world is more and more polytheistic.  Two gods vie for our worship, Mammon and Moloch, (or many more if one considers the fascination with self-worship today) and the high priests of such are big business buttressed by big government with the advertising department of the media.  The insatiable desire for gold destroys the virtues of temperance (i.e., virtuous self-limitation), generosity and patience, and cares not for its ripple effects on people and families—especially children. Unbridled license with regard to economic matters provides cover for unbridled license in other areas.  We have seen how Roe v. Wade has enshrined in our law that the unborn child is not a person.  Functionally, the dominant economic atmosphere and political philosophy have similarly enshrined that the born child is not a person either.  (Witness this week’s Supreme Court decision.)  Very little cognizance is taken, in the economic or political sphere, of children—except where they may be at the service of adults. Thus, everything in our culture–entertainment, economic, political–is geared towards adults.  Paradoxically, it is the adults who are acting like spoiled children—unpracticed in virtue, demanding immediate gratification and, in many cases, the satisfaction of their greed and libidinous desires.  This is not what Our Lord meant when He said that one must become like a little child if he wishes to enter the kingdom of heaven.  Indeed, as He will come  again, I predict that Mammon’s and Moloch’s (and the almighty Self’s) bubbles are about to burst.

This article, Baseball Cards Without Bubble Gum, 20 Years On is a post from The Bellarmine Forum.
https://bellarmineforum.org/baseball-cards-without-bubble-gum-20-years-on/
Do not repost the entire article without written permission. Reasonable excerpts may be reposted so long as it is linked to this page.