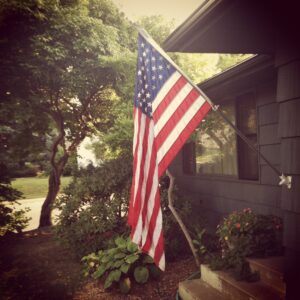 This year I have the pleasure and honor of teaching a Civics course to a group of high school seniors at Saint Agnes School in St. Paul, MN. I suspect that most Civics courses around the country are taught in a way that overemphasizes modern political attitudes and delivers very little about what it means to be a citizen of the United States.  Given this state of affairs, it seemed to me to be high time to teach a course on what it means to be a citizen–to live in a city or a country, and in particular, the United States. This being a significant election year also provides an opportunity to roll out this new course as these issues are in front of us on a daily basis. The newness of the course is thus only because of the oldness of the content.

In another place I have written that the problems of our country will not be solved until we as citizens learn to open our eyes and see reality once again. Part of the reason that we experience such tumult in our country is the fact that we tend to judge things by the standard of modern politics rather than by the the standard of reality. Likewise, we are more concerned with filling the belly than we are about cultivating virtue. This is not to say that there is not a deep reservoir of virtue and spiritual values within the American people; national tragedies like 9/11 have shown us that there is. But day-to-day, it is a legitimate question whether the citizens of this country truly know themselves and live as a human person was made to live; or whether they simply live on the surface of things ignoring the ultimate realities and purposes of their existence.

To that end, any good Civics course needs a foundation to show “the big picture” and what it means to be a good citizen. This has a particular meaning for us in the United States. One of the best definitions of the Church that I have ever read was Hilaire Belloc’s.  “The Church,” he said, “is the exponent of reality.” Indeed; and this has ramifications for civic thought. Fr. John Courtney Murray, S.J. once said–and I paraphrase–that “the question whether the Church can be reconciled with the American experiment is both impertinent and inverted; rather, the question is, how can the American experiment be reconciled with the Church.”  In the same collection of essays, Fr. Murray also stated–again, I paraphrase–that “the Catholic brings to public discourse a tradition and history both deeper and richer than others.”  It is from this starting point and conviction that a good Civics course–especially in a Catholic school–should start.

Before studying our founding documents and most certainly before engaging in the heady debates of public policy that dominate the airwaves and the blogs, students should be led to ask fundamental questions: what is a human person? Is a human person free? What is the nature of authority? Of government? What is the nature of law? As human persons are social by nature, they naturally live in communities beginning with the family–the most fundamental community of all. Because human persons are spiritual beings, they are also immortal–made for something greater. Denying or ignoring this fundamental nature of the human person has consequences when discussions of the common good or public policy arise. If man is seen only in his material aspect, he becomes a commodity, something that can be discarded or even destroyed. Talk of human rights has no meaning as he is valuable only insofar as he is politically expedient to those who rule. The right answer on the nature of the human person (his being social by nature, his ability to apprehend reality and know the truth, and his ultimate end) is critical to the secure foundation of any state. The fundamental principle in an analysis such as this is ultimately metaphysical–i.e., it is God who is the foundation and giver of existence and existents. One could turn the phrase thus, Deus est ergo sum.

Only after examining these fundamental questions of God, the human person, and law can students intellectually situate their own civic tradition in the proper context. For American students, an acquaintance of the English tradition of chartered rights–established and developed in thoroughly Catholic “Merrie England”–beginning with Magna Carta in 1215 and culminating with the colonial charters in the original 13 colonies is the necessary backdrop to the Declaration of Independence and Constitution. Custom and natural law were fundamental to the founders’ thinking as was a near universal belief in God as the foundation of reality, society and government. Indeed there were Enlightenment influences and ideas, but in no way was secularism dominant.

Here then, students should examine the fundamental documents that established our country: the Declaration of Independence and the Constitution. The debates that worked out a federal and state system with its dual sovereignties should be examined; and the subsequent rise to dominance of the Judicial Branch as the interpreter and arbiter of the constitutionality of legislation and acts (via Marbury v. Madison) should be considered. The Civil War amendments (14th-15th-16th) and subsequent jurisprudential thinking should then be analyzed and, in the case of the jurisprudential thinking, criticized.

Only with this base of knowledge at his disposal can the modern Catholic student intelligently engage in the debates of the day in the public arena.  A Civics course itself need not waste a student’s time with debates on current public policy, as entering those debates without this background is like–to use the line of C.S. Lewis–“entering a conversation at 11 o’clock that started at 8 0’clock.”  The Catholic student’s contributions will be far deeper and intellectually richer than the talking heads who purport to be the smart guys, and the smarmy political commentators who actually think that the center of reality is in Washington, D.C. The Catholic student thus educated will be able to contribute mightily and effectively to political discourse and have a right view of the human person and the common good. His contributions will not be soundbites or cheap rhetoric designed to incite or inflame, but will be reasoned, common sensical, and moral. Finally, and most significantly, he will be a good citizen because he realizes that the center of reality is not in Washington, D.C., but rather in the tabernacle of his parish church.

This article, Creating a Civics Course is a post from The Bellarmine Forum.
https://bellarmineforum.org/creating-a-civics-course/
Do not repost the entire article without written permission. Reasonable excerpts may be reposted so long as it is linked to this page.