1.  The names of the servants of God often indicate some leading feature in their work or in their character.  When God Himself gives the name this is always the case.  Joseph signifies adding or increasing, and was a forecast of his continuous increase, not only in grace and in favor with God, but also in glory and repute with men as long as the world shall last.  Rejoice in the growing devotion to St. Joseph, and ask yourself whether your devotion to him grows.

2.  St. Joseph is said to have had a boyhood and youth of suffering, and to have been persecuted and ill-treated by his brethren.  We should expect it to be so, since this was the lot of the patriarch of Genesis; and moreover, one who has such an eminent position in the Church on earth and such exceeding glory in heaven must have been conformed to our blessed Lord in having a career of suffering.  St. Joseph’s character as known to us in Holy Scripture is eminently one purified by having had much to undergo.  Such patience, gentleness, thoughtful charity, cannot be learned except at a heavy price.

3.  Joseph’s trade was that of a carpenter.  The thought of the great Patron of the Universal Church, the husband of Mary, having been a handicraftsman, ought to give us a great respect for manual labor.  The idea that there is in it anything unsuitable to our dignity is a vulgar, unchristian, heathen notion.  All the saints had a love for manual labor.  How much better such a life than that of self-satisfied ease and luxury!  Thank God if you have to labor. 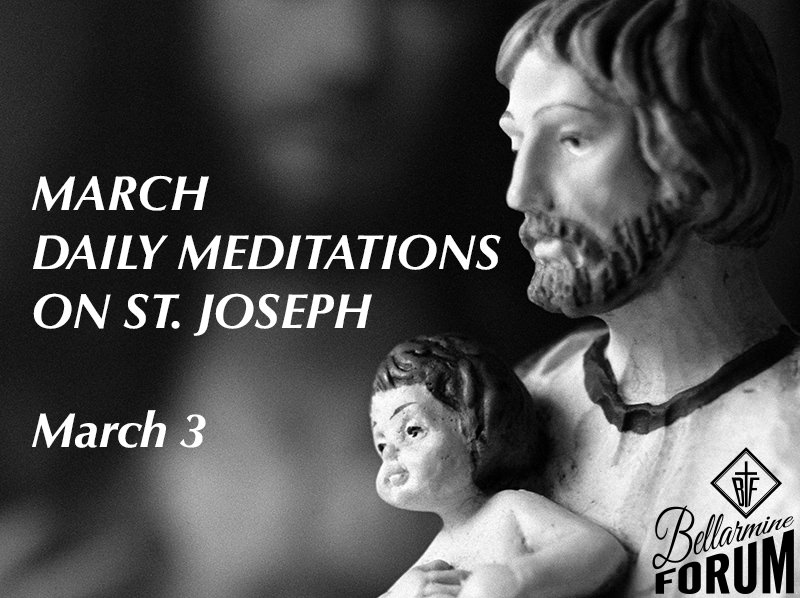 This article, March 3d — St. Joseph’s Childhood and Youth. is a post from The Bellarmine Forum.
https://bellarmineforum.org/devotional/the-catholic-daily/march-month-st-joseph/march-3d-st-josephs-childhood-youth/
Do not repost the entire article without written permission. Reasonable excerpts may be reposted so long as it is linked to this page.