17. — The Appearance of Jesus to the assembled Apostles.

The Appearance of Jesus to the assembled Apostles.

[33] And rising up, the same hour, they went back to Jerusalem: and they found the eleven gathered together, and those that were staying with them, [34] Saying: The Lord is risen indeed, and hath appeared to Simon. [35] And they told what things were done in the way; and how they knew him in the breaking of the bread.

[36] Now whilst they were speaking these things, Jesus stood in the midst of them, and saith to them: Peace be to you; it is I, fear not.

1.  When the two disciples arrived at Jerusalem they found the doors of the house where the apostles were, barred and bolted for fear of the Jews.  When they have gained admission they see a very different state of things from the sorrow and despondency of the morning.  All are full of a trembling excitement: Christ has appeared, not merely to the women, but to Peter himself.  Yet most of them scarcely dare to hope for such joy; and in spite of this confirmation by the new-comers, some are still incredulous.  So men are naturally incredulous of some great happiness; and for this reason men of goodwill are naturally the slowest to believe until some light from heaven enlightens them, or facts afford evidence that cannot be disputed.

2.  While the assembled apostles are discussing the news, suddenly Jesus Himself appears in their midst.  The doors are still fastened; but now He has broken the bonds of earth, and stands before them in the glorious beauty of His risen Body.  So He comes suddenly and unexpectedly to those who love Him and long for Him: no obstacles can keep Him away; no intervening ties can separate Jesus from the souls that are dear to Him and He to them.

3.  Jesus came to His apostles when the doors were shut.  The cares, and troubles, and dangers of the world were shut out.  This is the only means of drawing Christ to us.  He does not make His voice heard amid the world’s din.  We must shut the doors of our senses if Christ is to come and be our Guest. 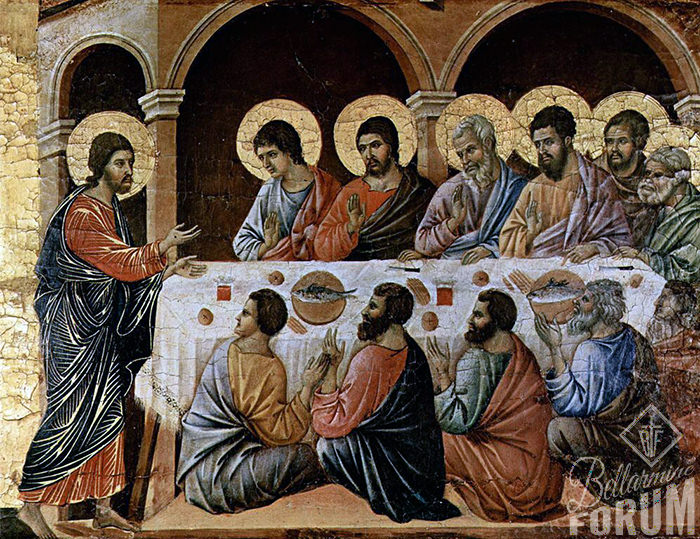 « Previous Section
5th Day — The Birth of Mary.Next Section »
18. — The First Appearance of Jesus to the Apostles.

This article, 17. — The Appearance of Jesus to the assembled Apostles. is a post from The Bellarmine Forum.
https://bellarmineforum.org/devotional/the-catholic-daily/resurrection-ascension-jesus-christ/17-appearance-jesus-assembled-apostles/
Do not repost the entire article without written permission. Reasonable excerpts may be reposted so long as it is linked to this page.