From Under the Rubble…Dynasty–The Rerun

Statesmen come and go, but dying dynasties always long for an encore.

After the Kennedy males of the younger generation thoroughly disgraced themselves, the task of Kennedy Compound rehab fell to Caroline.

It was a rocky road. In 2010, when she figured she could walk into Hillary’s New York Senate seat, she discovered that inherited swagger wasn’t all it was cracked up to be.

Eventually, though, the Glitz Brigade came through. The Camelot Canard covers a multitude of sins, and, last month, Caroline got her consolation prize.

Succeeding a long line of serious and experienced Ambassadors to Japan – one or two of them even statesmen – her portrait will soon be hoisted onto the wall alongside those of Mike Mansfield, Howard Baker, Walter Mondale, and Tom Foley – all in all, a distinguished cohort, happily lacking in the Glitz Factor.

But times have changed, and Obama Nation has precious little else to offer. Only the tarnished glow of counterfeit glamour survives.

Hillary Clinton is not the first person who comes to mind at the mention of glamour, but don’t be fooled: few surpass her in raw libido dominandi.

Her dynasty got off to a rockier start than Caroline’s – after all, Jackie didn’t have to schedule her national debut competing with Gennifer Flowers during halftime at the Super Bowl.

Hillary undoubtedly hated to have her family’s intimate secrets revealed, but she learned a lesson:

Neither does anyone else.

Once in the White House, she gathered hundreds of FBI files of those on her enemies list, and sicced the IRS on hundreds more.

What’s more, she discovered that nobody seemed to care.

After all, “what difference, at this point, does it make?”

That was only the beginning. Today the NSA is collecting everything everyone everywhere is saying, doing, or writing.

No one has taken to the streets. No one has been indicted. Heads will not roll. Complacent U.S. Attorneys and “Justice” Department hacks will sit on their hands. Chatter and blather will achieve unprecedented levels of the fog factor, and no more.

Obama is floundering. Jarrett, Axelrod, and Co. are vicious, yes – but they don’t know how to use power.

Hillary can scan the history of the past 25 years and watch the golden thread of power growing, glowing, in the hands of incompetents – the Bushes, Obama – and dissolutes – her husband.

Forget about stealing FBI files. Now she’s got the NSA.

And she has Bill.

Ever since High School, Bill wanted to be loved. At Georgetown, he was always running for some student office. He longed to be loved.

Yet, when Sam Donaldson asked, Slick Willie would not deny that he had raped Juanita Broaddrick

Hillary has every reason to hate what Bill did. She might even hate Bill. Yet they’re stuck with one another.

An aside: we’re told that the fallen angels in Hell hate one another more than they hate the damned – yet they work in concert to torture them and to bedevil us.

Visionaries among the saints tell us that in Hell the sins of the damned are written on their souls for all to see.

Sins? Hillary knows them all. And yet, she works in concert with him and his billionaire pals to prepare the path to glory – hers – and perdition – for the rest of us.

And with the NSA’s expert and obedient assistance, she will soon know our sins too.

Bill wanted to be loved. He screwed around endlessly, longing for approval, even from lowlifes.

Obama wants power but doesn’t know how to use the power he has. He plays lots of golf.

She only knows how to use power. All of it.

Already she commands the stage of the 2016 Democrat National Convention. She will win by acclamation.

Eat your heart out, Caroline.

She smiles as Obama drives more millions onto the dole. Her facile, fabricated cackle echoes as she watches their number rise, while jobs disappear by the millions.

Her acceptance speech is already written.

“My party is bigger than your party. I will fight for my people!

“I am vicious. No holds barred. I will fight to keep your safety net because your safety net is my safety net. Yes, I will take care of you, but I will also call on you. I will orchestrate you. I will harmonize you. And I will give you all the motivation and the ammunition you need to put in their place forever the greedy taxpayers who want to shut your water off.”

Well, it’s only a first draft.

The Dynasty of the Dead Unborn

What are Hillary’s priorities?

And in our materialist age, abortion unites a broad coalition.

The environmentalists, the tree-huggers, and the global warmers all hate people, especially foreigners whom they can’t ruin with the IRS, the DHS, or the EPA.

After all, they know that our domestic abortionists concentrate on the browns and the blacks at a much higher rate than the whites.

Why not the world?

Hillary might not agree with them, but she’s perfectly willing to use them.

But perhaps Hillary has her own private reasons for making you pay to kill as many unborn babies as possible.

Could it be that she hates Bill, she hates you, and she’s taking it out on them?

Our turn will come. She’s used the IRS before, and she’ll use it again. Criminally, of course, but she’ll find another spineless patsy like Holder to keep the lid on it.

The Congress? Hillary’s army, bolstered by millions of newly-documented foreigners anxious to belong, will handle that.

We mentioned the Bushes. Her debt of gratitude to those ciphers is immense. They solidified the bipartisan crony capitalist machine. She’ll fine-tune it.

“W” spent money like a drunken aviator. He launched the illegal wars against monsters abroad (Mrs. Merkel, take note), but also against Americans back home. The terror wars justify “extraordinary measures.” And Dick Cheney said that “GWOT” would last through the generation of our grandchildren.

Thus was spawned the “Patriot” Act, of which its original author and sponsor is now properly aghast and ashamed.

Forget it. The NSA already has your papers, and Hillary will too.

The Republicans? They can’t shake the monkeys off their back. The Banksters. The Pentagonians and their billions. The lobbyists and their fair share of the swag. Big Business and its desire for an endless supply of cheap labor.

Hillary will begin selectively. She will choose targets whose demise will send a message to those still left outside the spineless blob. Her purring pals in the media will showcase them all. Riefenstahl will writhe with envy.

And so will Hillary.

Feminists hate because they envy. They envy the humble, faithful, hard-working, loving, believing families who follow God’s law and demand that Caesar follow it too.

She’ll show’em. Not for nothing did she get the Bible removed from the Core Curriculum at Wellesley.

That was just the dry run.

Now all of us are sinners, your Rubbler worst of all.

But knowing that should counsel humility. Augustine stated simply that either we humbly seek the City of God or, goaded by pride and the libido dominandi, we will seek power.

Like the rest of us, Hillary has to choose.

If she chooses pride, then the Prince of This World, the Satanic leader of the City of Man, will assemble his legions and spur her on.

Their Hillary, our Hell.

But as Father Jim Schall, S.J., writes, Hell has a “brighter side.” 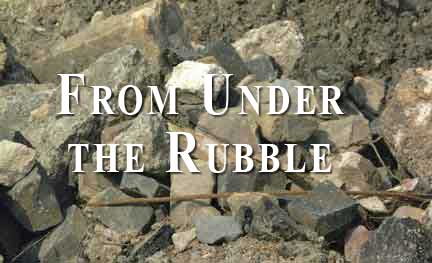 This article, From Under the Rubble…Dynasty–The Rerun is a post from The Bellarmine Forum.
https://bellarmineforum.org/from-under-the-rubble-dynasty-the-rerun/
Do not repost the entire article without written permission. Reasonable excerpts may be reposted so long as it is linked to this page.