In the Second Vatican Council’s document on The Church in the Modern World (Gaudium et Spes), the Council Fathers declare that man is “the only creature on earth that God has willed for its own sake” (GS, no.24§3). The Catechism quotes this passage in two places (CCC, nos.356 and 1703). How are we to understand this passage? St. Thomas Aquinas offers a helpful explanation of this phrase which prevents us from reading it according to the errors of modern philosophy.

For modern philosophers such as Immanuel Kant (1724-1804), the human person is not ultimately ordered to God. Rather, he is an end unto himself, apart from God. As Kant explains, “in the order of ends, man (and with him every rational being) is an end in himself, that is, that he can never be used merely as a means by any (not even by God) without being at the same time an end also himself” (Critique of Practical Reason, II., c.2). By this understanding, man would not be ordered to God except as a means for his own end. Man is the ultimate end for man.

It is not far from Kantian personalism to Marxist personalism, where every man becomes an end unto himself, as if his own god. As Marx (1818-1883) teaches, man must be freed from religion “so that he revolves around himself and thus around his true sun. Religion is only the illusory sun that revolves around man so long as he does revolve around himself” (Toward a Critique of Hegel’s Philosophy of Right: Introduction from Selected Writings, p.28). While Kant keeps God as a means for man’s morality, Marx removes God from the picture altogether. Here indeed is a sinister version of “man for his own sake.”

St. Thomas on the contrary makes clear that when we say that man as a rational creature is for his own sake, it must understood in reference to God as a further end: “We do not understand by this statement, that intellectual substances are ordered for their own sake by divine providence to mean that they are not more ultimately referred to God and to the perfection of the universe” (Summa Contra Gentiles, Book III, chap.112, no.10). Rather, it means that we are comparing man to the creatures below him, which exist for his sake.

In the natural order, the lower is for the sake of the higher. Plants, for example, serve as food for animals. Thus, plants and animals are both for the sake of man. As St. Thomas goes on to explain, men are “providentially managed for their own sake, and other things for their sake, in the sense that the good which they receive through divine goodness are not given for the advantage of another being, but the things given to other beings must be turned over to the use of intellectual substances in accord with divine providence” (ibid).

We see here as elsewhere the permanent worth of St. Thomas which allows to receive the teaching of the Church in a way free from modern errors. The teaching of St. Thomas protects the dignity of the human person, but in a way which subordinates the person ultimately to his Creator and Last End. 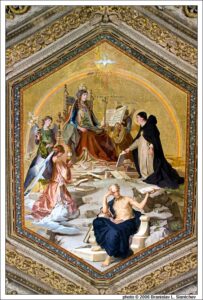 This article, Is Man “for His Own Sake”? is a post from The Bellarmine Forum.
https://bellarmineforum.org/is-man-for-his-own-sake/
Do not repost the entire article without written permission. Reasonable excerpts may be reposted so long as it is linked to this page.

Tagged as: Aquinas, Dignity of the Human Person, The Church in the Modern World, Vatican II