Recently a class of high school seniors that I teach read St. Thomas Aquinas’s “Treatise on Law” from his magisterial Summa Theologiae. The students struggled through the work and great discussion was sparked over the topic of law generally and the natural law specifically. In leading the class through the discussion with several of my colleagues, I ran across this quote on the natural law from the great legal scholar Professor Heinrich Rommen:

The idea of natural law obtains general acceptance only in the periods when metaphysics, queen of the sciences, is dominant. It recedes or suffers an eclipse, on the other hand, when being and oughtness, morality and law, are separated, when the essences of things and their ontological order are viewed as unknowable. The natural law, consequently, depends on the science of being, on metaphysics. 1

Trying to discuss metaphysics with high school seniors is a tall order in any age, yet my challenge to them was that they had to think about “ultimate questions.” This, in recent years, has been a theme of the Roman Pontiffs to youth in the various messages of World Youth Day celebrations. Blessed John Paul II reminded his young listeners that (and I paraphrase) not to ask the ultimate questions is to miss out on the adventure that is human life. In other words, life’s meaning is found in its origin and in its final end. In finding life’s meaning, the right answers will also be found for the pressing issues of the day–especially those regarding the sanctity of human life.

The practical among us will, perhaps, politely dismiss this as overly intellectual and the preserve of a rather small class of the philosophically curious. Such an attitude is itself symptomatic of what Rommen would describe as a society lacking an interest in metaphysics. Many an unwitting Catholic–not a few among the hierarchy–have taken this position. In so doing, they have become accomplices in the march of the culture of death and have failed to stand for Christ and His Church when they have been called to do so. Fr. John A. Hardon, S.J. commented: “What makes the situation so grave is that this culture is actively fostered by powerful cultural, economic and political currents which encourage the creation of a society that is mainly concerned with worldly prosperity and material efficiency.” 2 In a word, the powerful of the world have not concerned themselves with metaphysical questions, rather they have adopted a materialist ethic that caters to comfort and the proverbial filling of the belly; this to the exclusion of man’s ultimate destiny.

Nowhere is this seen more clearly than in the issue of contraception. The reality today is that one cannot even bring up for discussion the idea that contraception is wrong without being pilloried. Contraception (a.k.a. birth control) has been around since time immemorial, but it was always seen–even amongst the pagans–as unnatural. It was only in 1930, that general acceptance began to creep into society with the Anglican Church’s acceptance of the practice “for serious reasons within marriage.” As G.K. Chesterton commented at the time: “My concern is…with all to whom I might have once looked to defend the country of the Christian altars. They ought surely know that the foe now on the frontiers offers no terms of compromise; but threatens a complete destruction. And they have sold the pass.” 3 Indeed they have, and the foe has now so overrun not only “the country of the Christian altars,” but also a multitude of other countries as well. The foe has so conquered and demands such loyalty that it is seen as treason to speak against him.

The ubiquity of the contraceptive mentality is such that people will not talk about the issue and when there is talk, if it cannot be explained in a sound-bite answer, it is rejected. Such is the loyalty—unwitting or not—to the foe of our race. As Pope Paul VI predicted, contraception is a potent weapon in the hands of the very powerful in society. From the partner in the law firm who is adulterously sleeping with his secretary, to the government official conditioning the provision of aid to a poor nation, to the local public school who demands the rigorous attention of elementary school aged children to instruction on different sexual practices, contraception has changed and continues to change the landscape of society. Children are seen more and more as things to be avoided or inconveniences to a lifestyle trying more and more to be devoid of difficulty. With this mentality, it is a short step to abortion and infanticide. On this point, it should be no wonder that the largest provider of abortion in the United States is the foremost promoter and peddler of contraception: Planned Parenthood. This mentality, however, would never have gained traction had not human persons disparaged the search for the answers to the ultimate questions; had not disparaged metaphysics. Thus the difficulty of engaging in discussion in the modern world–especially in the United States.

The mentality, unfortunately, has even entered the holy precincts of God’s sanctuary. When Pope Paul VI issued Humanae Vitae in 1968, the selfsame foe of our race had so overrun the peoples of the world that the pope commented that his “smoke ha[d] entered the Church.” Indeed it had. Witness the case of Bishop James P. Shannon. An up and coming prelate, auxiliary bishop of the Archdiocese of St. Paul-Minneapolis, spokesman for the United States Conference of Catholic Bishops. He dissented from the encyclical citing the sad situation of a wife who had come to him for counseling on contraception and her being overwhelmed at her very real exhaustion of being a wife and mother. His advice: follow your conscience. No word on what the conscience is or how to form the conscience or what the Church’s role is in the formation of the conscience. Was there not a positive teaching to present? Were there not reasoned and reasonable means to preserve the integrity of the marital act without recourse to contraception? The ultimate result: dissent, the bishop’s resignation and laicization. Shannon’s was a sad story, but not unique. Indeed, he became a bit of a folk hero and there is now a YouTube video celebrating his “courage” in standing up to Rome. The fact of the matter is there is no courage in standing up to Rome; rather, true courage is in standing up for Rome. Contrast this position with that of Blessed John Paul II who, in his regard for metaphysical questions, defends reason: “Contraception is…so profoundly unlawful as never to be, for any reason, justified. To think or say the contrary is equal to maintaining that in human life situations may arise in which it is lawful not to recognize God as God.” 4

As is manifest in the most recent encyclicals and allocutions of John Paul II and Benedict XVI, the Church is now not only defending the Faith, but she is defending reason. She is the last voice on the earth that stands foursquare against the enemy. She always has and she always will. The reason is simple: she is preoccupied with metaphysics–namely, the ultimate metaphysical question: God. In so doing, she defends the truth, freedom, and the dignity of the human person. It is our task as the sons and daughters of Mother Church to do the same. How so? Become preoccupied with metaphysics. How does one do that? Acknowledge God, His existence, and His providential plan for the universe. And with an inquiring and humble intellect, recognize that God is God and that He intends every human person who is conceived to be forever happy with Him in eternity. Who would want to stand in the way of that? 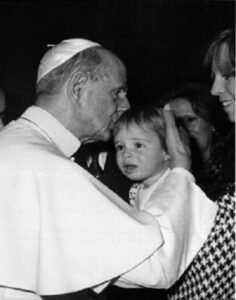 This article, Metaphysics and Contraception is a post from The Bellarmine Forum.
https://bellarmineforum.org/metaphysics-and-contraception/
Do not repost the entire article without written permission. Reasonable excerpts may be reposted so long as it is linked to this page.