There is a lot of unease floating through today’s conversations. One set of young parents is worrying how to opt their children out of morally repugnant vaccines. A pharmacist complains that he feels bullied “by the system” to provide dangerous products. A casual comment provokes the small business owner to grumble about being lost in bureaucratic quagmires. A neighbor rails at the homeowner association, “What do you mean I can’t have chickens in my own backyard?” And the educator pulls out a teacher’s manual for first grade curriculum in writing that “you can see is teaching first graders how be little political activists.” There’s a mounting sense that we are being herded into corrals where we would rather not be.

Steve Kellmeyer’s Designed to Fail: Catholic Education in America defines one of those corrals – namely the modern phenomenon of compulsory education for increasingly young children and older students. Parents who had hoped the parochial system might provide a haven from government schools will be sorely disappointed.

The first half of the book concerns the limitations of contemporary public education. For one thing, he believes that the current system is designed to train people (as contrasted to educating them) to perform docilely in the workforce, possessing mere functional literacy and high susceptibility to groupthink. “[T]he agrarian system created master artisans, while the compulsory mass school created life-long apprentices. It created a social caste system artificially stratified by age and test grades. It took the youth out of the workforce….separated them from their parents, made them dependent on non-familial authority, reduced their ability to read and learn, and eliminated early marriage and large families.” (p. 74)

The details supporting Kellmeyer’s thesis are fascinating…as are some of his peripheral conclusions. Adolescents, working as “apprentices” to skilled adults rather than herded into classes of their peers acquire practical skills, genuine responsibility, and the salutary company of adults… and tend to become more mature, capable individuals as a result. Young people with such broad (yet protected) experiences not only are apt to be more self-sufficient but demonstrate advanced intellectual achievement. These are no longer hypotheses based on an idealized past but a verifiable observation of thousands of home schoolers(1) coming from widely diverse backgrounds.

This is just the groundwork, however, for the book’s real purpose, which is to examine a particular subset of compulsory, secular government schooling, namely, the Catholic school that receives government money…and/or operates within the secular accreditation system.

Historically, the Church has been primarily concerned with adult education (adolescents considered as young adults), leaving, when possible, the education of children to parents or guardians. It’s an arrangement that falls under the Church’s principle of subsidiarity: that larger social structures are ancillary to more basic structures, of which the family is the most elemental. In other words, except under extraordinary conditions, the rights and responsibilities properly belonging to parents must not be appropriated by a larger structure, such as a school or a State.

This has been a consistent thread of Church teaching, as expressed for example by John Paul II, who writes in Familiaris Consortio: “Since parents have conferred life on their children, they have the most solemn obligation to educate their offspring. Hence parents must be acknowledged as the first and foremost educators of their children. Their role as educators is so decisive that scarcely anything can compensate for their failure in it….The rights and duties of parents to give education is essential, since it is connected with the transmission of human life; it is original and primary with regard to the educational role of others on account of the uniqueness of the loving relationship between parents and children; and it is irreplaceable and unalienable and therefore incapable of being entirely delegated to others or usurped by others.” [#36]

Compulsory schooling, however, changed the social environment and made creation of a parallel system, one that could inculcate Catholic values, seem necessary. However, it also created overwhelming problems, the most interesting of which is, ironically, what Kellmeyer calls a contraceptive position. While the connection isn’t immediately apparent, Kellmeyer understands the procreative act to be intimately bound to the creation not only of a child but also of parents, with all their rights and duties, one of which is the child’s education. “By forcibly interposing itself between parents and children,” he writes, “the state actively attempted to take over spiritual and moral formation. It intended to rupture the parental procreative act, the teaching act by which parents fulfilled their duty to teach their children about the God who made them. It wanted parents to have a distorted understanding of themselves. It wanted to keep parents from becoming whole. It wanted the lower classes to stop being so fecund. It is no coincidence that the American contraceptive movement leaped forward into the public eye in the 1920s, just as compulsory schooling began to hit its stride.” (page 112)

Kellmeyer believes that when the American Catholic bishops adopted a profoundly tenuous – however well-meaning – determination to assume the responsibility of schooling children, far from correcting the damage wreaked by the state, they became obstacles to the sacramental grace of marriage with the consequence of spiritually crippled parents and children. Unlike current, popular wisdom that holds schools to be the key to transmitting the Faith, Church teaching emphasizes that sacramental graces and adults capable of evangelizing – as parents to children – hold that key. “We don’t need money,” Kellmeyer writes, “we need doctrine. We need parents and secondary catechists who can deliver doctrine.” To accomplish this, Kellmeyer suggests adult and family catechesis, encouragement of vibrant monastic life, and a range of practical acts to foster a more serious commitment to orthodox teaching.

As a final point: a title such as Designed to Fail implies a designer engaging in a conscious, nefarious, conspiratorial plot. That would be too simple, however. The truth is that the design has been sketched by often well-meaning souls for a variety of reasons and given flesh by others, often for still different reasons. Social movements are vast, far-reaching webs of thinkers and planners, activists and enthusiasts, leaders and followers whose intersections can be mapped and monitored but are, in fact, the fruit of how large groups of people think about life in a given time and place.

Propagandists bear much of the blame for shaping this thought but, in the final analysis, we still have educational choices. For the time being, given enough determination and creativity, Americans are free to home school or to find alternative schooling options. And there are numerous organizations attempting to restore the educational landscape in favor of high academic standards, local control – and, in the case of parochial schools, independence from government money. These are reasons to hope but they do require an informed public. For readers wanting more information about the history and concerns one might have with compulsory, government schooling, anything written by the educator John Gatto will be of tremendous interest. Among his titles are: Dumbing Us Down: The Hidden Curriculum of Compulsory Schooling (1992); A Different Kind of Teacher: Solving the Crisis of American Schooling (2000); The Underground History of American Education (2001 – the complete text can be read at: www.johntaylorgatto.com/chapters/index.htm); and Weapons of Mass Instruction: A Schoolteacher’s Journey through the Dark World of Compulsory Schooling (2008). 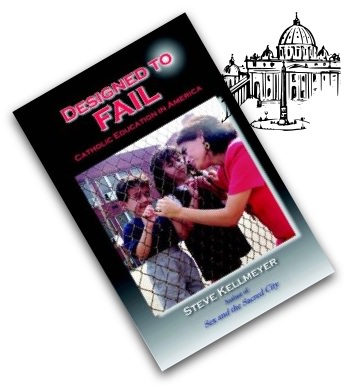 This article, Plugged into the System Catholic Schools and Compulsory Education: Book review of Designed to Fail: Catholic Education in America By Steve Kellmeyer Bridegroom Press, 2005 (221 pages) is a post from The Bellarmine Forum.
https://bellarmineforum.org/plugged-into-the-system-catholic-schools-and-compulsory-education-book-review-of-designed-to-fail-catholic-education-in-america-by-steve-kellmeyer-bridegroom-press-2005-221-pages/
Do not repost the entire article without written permission. Reasonable excerpts may be reposted so long as it is linked to this page.