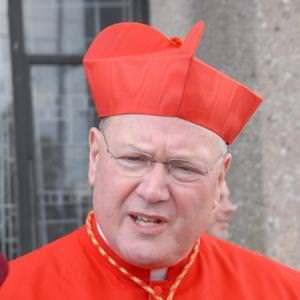 Of the prelates of the Church that I think I might most enjoy having a drink with, His Eminence Timothy Cardinal Dolan would be the one.  His affability and Irish charm would no doubt be the life of the party.  We would probably laugh uproariously over some jokes, enjoy some good conversation, and he would likely pick up the tab.  It is also in such a setting, either sipping an Irish whiskey or choking down an Old Style, that I could feign drunkenness and tell him what I really thought about some of his decisions.  That’s not to say that I wouldn’t tell him directly, but I find that as a prudential strategy, the message might be received with more humor and less embarrassment.  But, the message would be received.  My basic objection to some of Cardinal Dolan’s decisions in the last year, is that they send an ambiguous message and they seem to reinforce the public worship of the power elite when it should be that of Christ.

The decisions I speak of are not of a doctrinal nature per se, but they have ramifications as to how doctrine is understood and practiced by the faithful. The most recent of these moves is the awarding of the St. Elizabeth Ann Seton Award to the CEO of the Girl Scouts USA, Anna Maria Chavez.  The record of Ms. Chavez and her rise in political and lobbying circles has been ably documented by Mary Rice Hasson.  In addition to her work for radically pro-abortion and pro-contraception politicians, she has consistently been a fellow traveler of Planned Parenthood and other radical organizations dedicated to “reproductive choice,” pro-contraception, pro-abortion and pro-lesbian causes.   It doesn’t take an army of reserachers to know that in recent years that the Girl Scouts have more and more aligned themselves, tragically, to these issues; a quick search of Google could provide that.  (Again, I would refer to Mrs. Hasson’s fine work.)

So why the award for a supposed  “exemplary Catholic” according to the standards laid out by the National Catholic Committee for Girl Scouts and Campfire?  I will leave aside what I see as internal inconsistencies in the criteria for these various awards.  That may be fodder for another article.  But the awarding of the honor under the rubric enunciated, raises the question:  what is so exemplary about the practice of the Catholic faith by Ms. Chavez?  I certainly do not presume to be able to peer into her soul, nor do I know the struggles she may have or the devotional life she may lead.  What I can tell and what I do know are the friends she has and with whom she associates.  These individuals and groups at best undermine Catholic faith and morals and at worst seek to destroy the Church.   The observation of Ben Franklin certainly applies here: “He who lies down with dogs, shall rise up with fleas.”

So is Cardinal Dolan violating a policy position of the United States Conference of Catholic Bishops (USCCB) of which he is President?  Recall the relevant portion of  “Catholics in Political Life” (2004):

The Catholic community and Catholic institutions should not honor those who act in defiance of our fundamental moral principles. They should not be given awards, honors or platforms which would suggest support for their actions.

This was an oft-cited passage when President Obama was receiving an honorary degree from the University of Notre Dame and it has been cited in other instances. I think that this is a legitimate question given the honoring of Ms. Chavez; the public welcome and acknowledgment at Mass at St. Patrick’s of Vice-President Biden; and (something John Cardinal O’Connor did not do) the welcoming and seating at a place of honor a President of the United States who tells an organization that makes its money on the corpses of dead children, “God Bless You.”

Quo vadis, Your Eminence?  I do not pretend to know the horrible and weighty job you have.  The best I and the rest of the faithful can do is to support you with our prayers and sacrifices.  Yours is a powerful voice.  You can stop Attila at the gates!  Indeed by prayer, persuasion, conversation and the canonical tools at your disposal; but not by telling the citizens what a great guy he (or she) is!  Speaking as a Catholic father, I will one day stand before Almighty God to account for what I have taught my children and how I have taught them to stay faithful to His Church.  What message is sent to them when Princes of the Church publicly honor those who are bent on rendering her irrelevant?  Truth and charity, as Pope Francis has shown us, are not mutually exclusive.  And, as the Holy Father has also reminded us, the Devil prowls about the world, seeking the ruin of souls.

Let us ask the great Mother of God, who has crushed Satan under her foot, to pray for His Eminence and all of us.

This article, Quo vadis, Cardinal Dolan? is a post from The Bellarmine Forum.
https://bellarmineforum.org/quo-vadis-cardinal-dolan/
Do not repost the entire article without written permission. Reasonable excerpts may be reposted so long as it is linked to this page.