The End of the Soldier

Chesterton famously commented, “The true soldier fights not because he hates what is in front of him, but because he loves what is behind him.”  In this pithy statement, Chesterton encapsulates the end or purpose of a soldier.  We saw this honored with the posthumous awarding of the Congressional Medal of Honor to Army Chaplain and Servant of God, Fr. Emil Kapaun.  Though chaplains are, by law and the Catholic tradition, prohibited from taking up arms, they train, they are in the foxholes, and they live every bit of the military life as any other soldier.   From time immemorial, soldiers wear the insignia or the uniform of their country.  In this, Fr. Kapaun, wore two uniforms: that of the United States Army and that of the Kingdom of Christ.   In the Congressional Medal ceremony, a narrative of the recipient’s heroism is enunciated.  For Fr. Kapaun, it was no different.  Yet, with technology and, even more, with a public philosophy that edges ever more towards seeing the human person not as the image of God, but as something expendable, will we have future examples of this type of heroism?  Will the Congressional Medal of Honor become obsolete?  Is this the end of the Soldier? 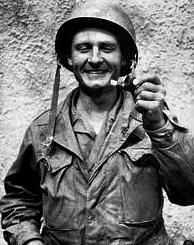 These thoughts came to me as I spoke with my father about the heroics of Fr. Kapaun.  One of the more memorable anecdotes that impressed my father was the fact that Fr. Kapaun under heavy enemy fire carried a soldier to safety, dodging bullets along the way, and with a pipe—which he always smoked—hanging out of his mouth.  Undaunted by danger to his own life and limb, Kapaun moved from foxhole to foxhole encouraging the soldiers, administering Last Rites, and doing what he could for his men.  Further proof that a true soldier is the stuff of romance, an enemy sniper took aim at Fr. Kapaun and barely missed, having shot the pipe out of his mouth.  Father’s response: to proudly show the pipe and ham it up for the camera!

Miguel Cervantes, the famed author of Don Quixote, knew something of soldiering as he fought in the galleys at Lepanto in that storied defeat of the Mohammedan fleet.  His description captures the reality of the soldier in a way that only one who experienced battle could:

[T]he soldier…urged on by the honor that nerves him, he makes himself a target for all that musketry, and struggles to cross that narrow path to the enemy’s ship.  And what is still more marvelous, no sooner has one gone down into the depths he will never rise from till the end of the world, than another takes his place; and if he too falls into the sea that waits for him like an enemy, another and another will succeed him without a moment’s pause between their deaths; courage and daring the greatest that all the chances of war can show (Don Quixote, Part I, Chapter 8).

What a vivid description!  “Courage” and “daring” in defense of those behind one—country, family, fellow soldiers, the faith.  This is the essence of the soldier.

The public philosophy of the United States and the technological advances of recent years, however, threaten to make the soldier a thing of the past.  Our public philosophers in the media, politics and educational establishment do not encourage virtue or even suggest the noble calling of the soldier.  Stories of courage and daring are stripped from our school shelves for the latest politically correct virtue to be imposed.  Courage is passé; tolerance (i.e., acceptance of all manner of perversity) is in.  There is a muddling of the differences in the sexes with the acceptance and promotion of the false idea that there is no real difference between men and women, boys and girls.  As a result, in order to deal with supposed slights against the fairer sex, the world must be made fairer and the “sissification of boys” has been an official program of the cultural elites since at least the 1970s.  Instead of teaching young men to be gentlemen who are courageous and daring on behalf of their mothers, sisters, and future wives, they are taught a false egalitarianism that takes the romance and flavor out of life and diminishes respect for women.   Reading Cervantes, Cheseterton, Stevenson has given way to the Twilight Series or the paradigm of whiny adolescence—The Catcher in the Rye.

Couple this widespread indifference to virtue with the latest technological wonders.  Have we dared to ask the fundamental question about technology: is this a good thing for human persons?  In particular, the modern weapons of war are truly terrifying.  Setting aside the absolute monstrosity that is a nuclear weapon, what of drones?  Already, drones are being used in foreign lands by our government  (and other governments) to spy or as unmanned vehicles of terror and death.  Indeed, drones are potentially being used here on U.S. soil to spy on citizens and are contemplated as being used to “take out” undesirables.   It seems much easier to kill a human being as if he were a couple of pixels on a screen as in a video game than in coming face-to-face with him on the ground—even at a distance.

Given this state of affairs, what are we to make of wars of the future?  My intent in this article is not to glorify war; however, it must be admitted that wars are not intrinsically evil, indeed they may be a course of action that is just under particular circumstances.  But given our public philosophy that eschews virtue—especially courage—and the rise of the drones and other terrifying specters, are we even training our children and our military to be true soldiers?   Are we cultivating empathy at the same time as offering a true education in virtue and examining what it truly means to be a soldier?  Or are we reinforcing a video game culture that sees warfare as simply a means of ridding ourselves of undesirables in the most antiseptic way possible—having no human contact or recognizing the humanity even of our enemies?  But–it will be objected–killing enemies with drones will save lives.  Perhaps, but respect for human life is further diminished and the horror of war will be further diminished.  In the end, the losers will be the weakest, those who do not control the levers of power.

Perhaps we are seeing the end of the soldier.  Yet, amidst all of this, human nature is difficult to re-program.  There will be examples of heroism; of courage and daring; of defense of the innocent; of reckless disregard of one’s own life in defense of those behind him.  There will be the examples of a Fr. Kapaun and of a Cervantes.  Perhaps these will be found only in obscure books, but, like all virtues—they will be found, recognized, and will speak to the human heart.  And maybe, in the cold and terrifying future of drones, there will be human persons who will find the true end of the soldier.  On them will civilization’s hope rest.

This article, The End of the Soldier is a post from The Bellarmine Forum.
https://bellarmineforum.org/the-end-of-the-soldier/
Do not repost the entire article without written permission. Reasonable excerpts may be reposted so long as it is linked to this page.