The First and Enduring Sin 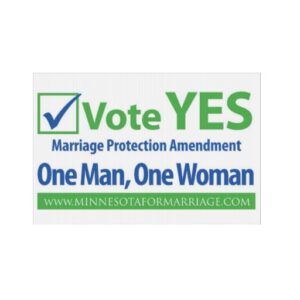 This past Saturday–September 29, 2012–in Minneapolis, Minnesota was a beautiful day. The sun was shining, the temperature was a warm 80 degrees, and the fall colors of the changing leaves were done as by a master painter. A perfect day for my 7-year-old daughter to play in the front yard. Indeed she was. Into this seeming Shangri-La, however, entered an adult woman rather rude, crude, and unrefined. Driving by our home, this woman saw my daughter in the front yard and shouted: “Vote NO, you ugly piece of shit.” An obvious response to the sign in our front yard supporting the Marriage Amendment in Minnesota that would affirm marriage as a union between one man and one woman (see above). Needless to say, this encounter so terrified my little girl that she ran in the house crying.

My initial reaction was to wonder why I didn’t have a ready supply of bricks near the front steps for such occasions. But upon reflection, it occurred to me that this incident was a microcosm of the cosmic battle that has been raging since the first creature of God said non serviam. Indeed, it sheds light on what theologians speculate was that first and irreversible sin of Lucifer: the fact that one of the greatest of God’s creatures would have to bow and worship a child.

It seems that this same non serviam is played out in the causes du jour of those who would wish to re-make society. While this is not an exhaustive analysis, one can see the thread that is common to all of these causes of the radical leftist agenda. Beginning from the more remote of the issues, radical environmental policies have the practical effect of driving up food and fuel prices. Rising costs and added regulations put pressure on people and ensure that they hesitate to start families.  The desired effect is therefore achieved among the more radical of these policies’ authors–no new children to inhabit the planet and deplete resources.

A more direct assault on children is the widespread acceptance of contraception. There has always been contraception, but it has not always been seen and accepted as a necessity of life. Now the ruling class speaks of it as if it were an essential like food and water. Back in the 1970s the Nixon Administration made it a matter of national security. Self-mastery and maturity were jettisoned in rather short order, as was the common sense philosophy that saw contraception for what it was–a disorder. Dare I call this state of affairs the triumph of the culture of hedonism?  We truly live in a society in the West where nothing must get in the way of one’s sexual pleasure, no matter how it is achieved.  The very reason for contraception is the achievement of such pleasure without the possibility of the accompanying natural result. Why? Because children will come into the world–something that must be prevented. An echo of the first time the creature would not submit to the Creator.

In the minds of the ruling class, this gospel of sexual pleasure must be propagated with the sincerity, zeal and dogmatism of any other religious belief. Thus, there are systematic programs that seek to gain adherents among the youngest members of society. K-12 sexual education as part of a compulsory education program further separates children from their parents and makes them tools in the hands of those who would propagate this anti-child culture. Not content with innocence or cultivating natural wonder about everything, theirs is a program to make “little adults” fascinated, nay, preoccupied with one thing. A child in this situation, instead of being a capax mundi, is only capax ipsius. The paradox, of course, is that this program ensures a perpetual adolescence–a permanent fascination with sense pleasure–without any normal maturation process or consideration of other values. Teaching children to love–to do what’s best for the other, has no place in this program. A utilitarian and pragmatic view of the human person is propagated. At the root of this, again, is a disdaining of children and things of children. Again, an echo of that primeval event that saw the loss of everything because of being enamored of one thing.

When the contraception fails, the same aforementioned education program suggests a solution: abortion. Nothing is more anti-child than the systematic and planned murder of them. Whether it is through the Plan-B “morning after” contraceptive or some other chemical process that kills a still developing embryo or a more invasive surgical abortion, the result and the crime are the same. Abortion is the ultimate hatred of children–Moloch’s revenge.

Now the same powerful forces are attempting a new tactic–the redefinition of marriage. With the contraceptive aspect of this culture having already attempted to sever the tie between marriage and children, the door has been opened to all manner of anomalies–most significantly, the push for recognition of so-called homosexual marriages. Again, the culture of the non serviam will not stop until all manner of recognition an approbation of its program is accepted. Children play no part in the picture, except where they may be used to “prove” that a same-sex couple can do what the natural institution of marriage and family does.  It is a program of selfishness; and selfishness, unlike love, is not creative, it is destructive.

Our hope is indeed through a Child. Perhaps that is why we will not inherit eternal life “unless we become like little children.”

This article, The First and Enduring Sin is a post from The Bellarmine Forum.
https://bellarmineforum.org/the-first-and-enduring-sin/
Do not repost the entire article without written permission. Reasonable excerpts may be reposted so long as it is linked to this page.