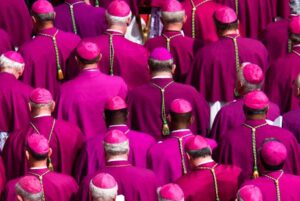 The Holy See has sent out a survey or questionnaire on the topic for the next Synod of Bishops, the family, and the bishops have been instructed to give it the widest possible distribution. So some dioceses in Great Britain have already put it online, and dioceses everywhere will soon send this down to the parish level where in many places it will become inevitably a referendum on Church teaching regarding divorce, contraception, homosexual unions and, well, you know the gig. The questionnaire does not in fact pose any questions on church doctrine, but it doesn’t matter. The impression is already out there that the Catholic Church under the new Pope is going to become a “popular” church, like, say the Anglican communion.

The problems connected with family life have their basic root in the degradation of Catholic moral life since Vatican II. For instance, Catholics in huge numbers – 80% we are told – have been living a contraceptive style of marriage for decades, and that perversion has led predictably (as Paul VI did predict) to a lowering of general morality among married and single Catholics, to an explosion of the Catholic divorce rate and marital infidelity in general, to Catholic majorities approving of abortion and gay marriage and to the latest phenomenon of addiction to pornography among Catholic boys and men. Radical theologians are already composing and signing petitions asking for a total overhaul of church teaching on all sexual matters to liberate the Church. Ah, back to the future.

The solution, according to some Church leaders seems to be to take a more “pastoral” approach to these issues, but not to undertake any moral reform of the Church itself. Now since Church leaders for decades have been basically silent on issues like contraception, the only more pastoral approach one can think of is to encourage people not to think that such things are always morally wrong or mortally sinful, and thus not deprive their practitioners of the sacrament of the Eucharist. The pastoral solution to divorce and remarriage so far has been to open the flood gates of easy annulments, where it seems anyone can get one if only he applies. Obviously many people in Germany won’t bother, so the Church leaders in Freiburg decided to invite people in adulterous unions to come home anyway and feel welcome at the Communion line. Rome stepped in to quash that invitation, but the Archbishop of Munich has declared that this effort is not over as far as the German bishops are concerned, no matter what Rome says!

Now, does the Archbishop really think that inviting adulterers to Communion will begin to refill empty German churches? Or does he really think that softening the teaching on and pastoral approach to contraception – which will almost certainly guarantee that the 20% of Catholics who follow Church teaching on that issue will dwindle to near 0% – is likely to bring droves of German ex-Catholics back to the Communion lines? Has this man paid no attention over the past 50 years to what has happened in the Church of England that has followed such accommodating pastoral solutions since 1930? No? As a true cynic I suspect the issue may be well be just monetary, an effort to get more German ex-Catholics to check that income tax box that causes the German government to direct part of their taxes to the Catholic Church. Sorry, but that makes more sense to me than a serious hope that such pastoral action will restore the faith of former Catholics.

The Catholic Church in western countries is truly in need of serious moral reformation. The priest pedophilia scandals were signs of the times and they were just a tip of the moral iceberg of clerical moral issues. The Church’s bishops have sedulously covered up the much greater problem of homosexuality in the priesthood, and in Europe they never discuss a growing problem of parish pastors & other priests having ongoing immoral relationships with women. This might explain why the issue of married priests is always popping up on the agenda of some European hierarchies.

The perfect storm that may be upon us is that all this immorality of Catholics is tied to the winds of bad moral teaching, like the notion of a fundamental option, which both John Paul II and Benedict tried to overcome, and to the winds of a now pervasive universalism of salvation on both the theoretical and practical level. The corruptive power of “fundamental option” is that almost no sin can change it once that option is directed to God. So contraception does not alter my fast track to heaven, nor does abortion, homosexuality, and any perversion you can think of, not even murder, genocide, etc., etc. None of these really things matters in the end.

And why don’t these things matter? This is because, in the end, everyone is going to end up in Heaven anyway, since God supposedly only cares about getting us into Heaven by hook or by crook. To have anyone lost would mean that God has failed in love, at least according to one prominent theologian of recent memory, one who was very popular among many conservative Catholics, and especially among the middle age members of the German hierarchy and other European hierarchies. Professor Ralph Martin has recently written a splendid book on this topic of universal salvation in currents of modern theology and its negative effects on evangelization, missionary activity and vocations. One can only hope many bishops will read this timely work soon, before the Synod perhaps. But this radical idea, long ago condemned by the Church, is not only communicated academically but in other much more practical ways as well, like the constant stream of funeral eulogies and homilies that canonize everyone including very public sinners, for instance.

Like the popularized fundamental option approach to moral living, the notion of universal salvation deeply undercuts any real effort at moral reform in the Church today. Indeed this combination of false doctrines seems to blind many bishops to the true moral depravity that surrounds them in their dioceses. Sin just doesn’t exist or matter anymore. These winds of change easily convince people that it really doesn’t matter how one lives morally so long as one is kind to others and trusts in a merciful God. The Anglicans have not done very well employing a pastoral approach based on that kind of doctrine. Why would we follow their lead today?

I am sure the coming Synod will avoid such nonsense, but mainly because it is increasingly made up of bishops from non-European churches who have witnessed the death spiral of the continental churche, and the Anglican Church as well, and will not make the same mistakes. One good effect of the Synod is already apparent. It has caused some of the Anglophile bishops and wacko theologians to show their true colors in advance.

Fr. Pilon is  priest of the Arlington, Virginia diocese and has taught Systematic Theology at Mount Saint Mary’s Seminary and Notre Dame Graduate School of Christendom College. You can read more of his essays at:  http://littlemoretracts.wordpress.com/

This article, The Perfect Ecclesial Storm is a post from The Bellarmine Forum.
https://bellarmineforum.org/the-perfect-ecclesial-storm/
Do not repost the entire article without written permission. Reasonable excerpts may be reposted so long as it is linked to this page.