The Plan of this Pontificate: The Standard of Christ

It is fitting that the Holy Father’s Mass of Inauguration will be offered on the Solemnity of St. Joseph, Patron of the Universal Church, as the Holy Father has indicated his great devotion to St. Joseph. Indeed, the first days of his Pontificate have also shown his tender and devoted love for Our Blessed Lady, with his having invoked her almost immediately upon the central balcony of St. Peter’s and having venerated her in his first official act as Pope under her title of Salus Populi Romani. He has not tired of invoking her intercession and prayers for the Church. Of course he keeps both of these powerful patrons under the Name of Our Blessed Lord, of whose Society he is a member. Thus, his coat of arms: Christ with His Blessed Mother and St. Joseph. 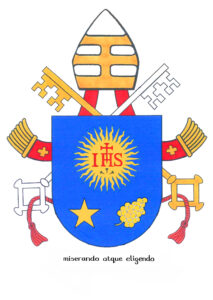 Commending himself to the intercession of Our Lady, St. Joseph and that paradigm of peace and poverty, St. Francis, the Holy Father’s modus operandi is that of St. Ignatius and the Society of Jesus. Not infrequently in his first days as Pope, he has mentioned that the choice in one’s life is either for Christ or the Devil. Perhaps, I am too biased towards my Jesuit teachers, but I think that this might be said to be the plan of his Pontificate. As a good Jesuit, he knows well “A Meditation on Two Standards” from the Spiritual Exercises of St. Ignatius Loyola: “The one of Christ our Supreme Leader and Lord, the other of Lucifer, the deadly enemy of our human nature.” Several lines from this meditation are worth mention here. First the Standard of Satan:

Consider how [Satan] summons innumerable demons, and scatters them, some to one city and some to another, throughout the whole world, so that no province, no place, no state of life, no individual is overlooked….Consider the address he makes to them, how he goads them on to lay snares for men and bind them with chains. First they are to tempt them to covet riches (as Satan himself is accostomed to do in most cases) that they may more easily attain the empty honors of this world, and then come to overweening pride. The first step, then will be riches, the second honor, the third pride. From these three steps the evil one leads to all other vices.

Next, the Standard of Christ:

Consider how the Lord of all the world chooses so many persons, apostles, disciples, etc., and sends them throughout the whole world to spread His sacred doctrine among all men, no matter what their state or condition….Consider the address which Christ our Lord makes to all His servants and friends whom He sends on this enterprise, recommending them to seek to help all, first by attracting them to the highest spiritual poverty, and should it please the Divine Majesty, and should He deign to choose them for it, even to actual poverty. Secondly, they should lead them to a desire of insults and contempt, for from these springs humility. Hence, there will be three steps: the first, poverty as opposed to riches; the second, insults or contempt as opposed to the honor of this world; the third, humility as opposed to pride. From these three steps, let them lead men to all other virtues.

Already we have seen the plan of this Pontificate–the Standard of Christ: poverty, suffering insults and contempt (as opposed to earthly honors), and humility.

May God grant him many years on the Throne of Peter! Ad multos annos, Papa Francisce! 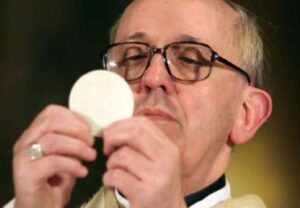 This article, The Plan of this Pontificate: The Standard of Christ is a post from The Bellarmine Forum.
https://bellarmineforum.org/the-plan-of-this-pontificate-the-standard-of-christ/
Do not repost the entire article without written permission. Reasonable excerpts may be reposted so long as it is linked to this page.