“The Shutdown Won’t Stop Us”

Interfaith Worker Justice (IWJ), an Alinskyian organizing network that works directly with clergy, seminarians, and unions,i sent out an e-letter titled “The shutdown won’t stop us.”

Their point was that even if the government isn’t working, IWJ is still on task, helping to organize rallies around the country for comprehensive immigration reform. The term has a specific meaning for the IWJ:

“Now is the time, this is the moment to do what is right and just, what the God of all people requires of us a nation and as people of faith. At this very moment the work is waking up and shaking up Congress to act, to vote, to legislate. Yet a small cadre of selfish and reactionary party activists and John Boehner, the House Majority leader, are standing in the way of what a majority of the nation wants: a pathway to citizenship for 11 million people who are our neighbors and our brothers and sisters.” ii (Emphasis added)

One of those rallies was held in Albuquerque, New Mexico. One group, El Centro de Igualdad y Derechos, held a big banner with drawings of hot air balloons on which were written “Respect” and “Path to Citizenship.” “Allen Sanchez, executive director of the New Mexico Conference of Catholic Bishops, was on the roster of speakers at the event. ‘The Pope is with you. The Catholic Church is with the immigrants,’ Sanchez said to cheers. ‘Congress: No more playing games. You are playing games with people’s lives.’ Sanchez also criticized the partial shut-down of the federal government. ‘We got to be building bridges, not burning them, and the shut-down of government is burning bridges..,’ he said.”iii

Alternative plans for immigration reform, that don’t include citizenship, are rejected by the protesters: “Nothing less than a path of citizenship will be acceptable to our families and workers,” according to Rachel Lazar, El Centro’s executive director.iv

Rep. Luis V. Gutiérrez (D-IL) had himself arrested at the Washington D.C. rally that included some of the nation’s top Democrat Party and union leaders.[v] The arrest was staged, that is, it was planned in advance to attract media attention. “An immigration campaign organizer for the Center for Community Change (CCC), a liberal grassroots organizing group working with a Hispanic advocacy group and the Service Employees International Union (SEIU), sent an email this week asking for at least 200 people to volunteer to get arrested at an immigration rally in Washington, D.C. in acts of civil disobedience.”vi

Others among the arrested were Juan F. Soto, the director of Gamaliel’s Civil Rights of Immigrants campaign (and also director of Gamaliel of Metro Chicago and Pilsen Neighbors Community Council.); Michael Okinczyc of VOICE-Buffalo in New York, another Gamaliel affiliate;vii Gamaliel is another faith-based Alinskyian organizing network.

Curiously, the National Parks Service, which otherwise restricted use of the National Mall during the government shutdown, approved this rally, causing critics to see this as “special treatment for the administration’s allies.”viii

Other Alinskyian organizing networks supporting these rallies included the PICO National Network,ix the Industrial Areas Foundation,x National People’s Action,xi and Citizen Action.xii “Simultaneous events in dozens of cities across the country – with common demands and slogans – don’t happen spontaneously,” one supporter proudly explains. “These events – as well as the large rally planned for Tuesday on the National Mall in Washington – happen because of the existence of a network of national and local organizations and activists that includes paid staff and volunteers.”xiii 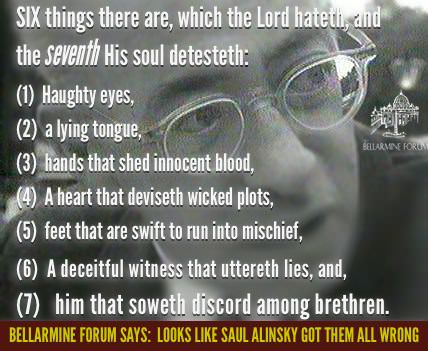 This article, “The Shutdown Won’t Stop Us” is a post from The Bellarmine Forum.
https://bellarmineforum.org/the-shutdown-wont-stop-us/
Do not repost the entire article without written permission. Reasonable excerpts may be reposted so long as it is linked to this page.