The Supreme Court and the Natural Law 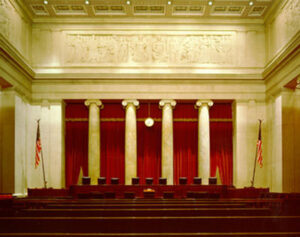 In a recent commentary, Mr. John DeJak makes a clarion call to moor applied law to natural law via metaphysics. A clarion call it should be since applied constitutional law has in my view never been tethered to the natural law except by the narrowest of strands. In fact, the words “natural law” have not appeared in a reported decision of the United States Supreme Court in over 4 years (that being a single, isolated reference to a book title using those words), and the words “natural law” have not been used substantively in the decisions of the nation’s highest court in more than 10 years.

In those decisions in which the natural law is explicitly discussed, the Supreme Court has time and again rejected the invitation to resort to natural law in interpretation of the Constitution. The following citation is typical:

In an apparent attempt to disparage a conclusion with which it disagrees, the dissent attributes our reasoning to natural law. We seek to discover, however, only what the Framers and those who ratified the Constitution sought to accomplish when they created a federal system. We appeal to no higher authority than the Charter which they wrote and adopted. Alden v. Maine, 527 U.S. 706, 759 (1999).

Quite contrary to the truth of the matter, natural law has often been equated with arbitrariness. Rather than being the cornerstone of the legal system, it has been viewed as the antithesis to justice as illustrated by the following:

If, indeed, a Court of Equity in England did possess the unbounded jurisdiction, which has been thus generally ascribed to it, of correcting, controlling, moderating, and even superceding the law, and of enforcing all the rights, as well as charities, arising from natural law and justice, and of freeing itself from all regard to former rules and precedents, it would be the most gigantic in its sway, and the most formidable instrument of arbitrary power, that could well be devised. It would literally place the whole rights and property of the community under the arbitrary will of the Judge, acting, if you please, arbitrio boni judicis, and it may be, ex aequo et bono, according to his own notions and conscience; but still acting with a despotic and sovereign authority. A Court of Chancery might then well deserve the spirited rebuke of Seldon; ‘For law we have a measure, and know what to trust to-Equity is according to the conscience of him, that is Chancellor; and as that is larger, or narrower, so is Equity. T is all one, as if they should make the standard for the measure the Chancellor’s foot. What an uncertain measure would this be? One Chancellor has a long foot; another a short foot; a third an indifferent foot. It is the same thing with the Chancellor’s conscience.’ Grupo Mexicano de Desarrollo S.A. v. Alliance Bond Fund, Inc., 527 US 308, 332-333 (1961) (citing Joseph Story 1 Commentaries on Equity Jurisprudence § 19, at 21).

As Catholics, we could not disagree more. The Holy Father puts it this way:

At the heart of every culture, whether perceived or not, is a consensus about the nature of reality and the moral good, and thus about the conditions for human flourishing. In America, that consensus, as enshrined in your nation’s founding documents, was grounded in a worldview shaped not only by faith but a commitment to certain ethical principles deriving from nature and nature’s God. Today that consensus has eroded significantly in the face of powerful new cultural currents which are not only directly opposed to core moral teachings of the Judeo-Christian tradition, but increasingly hostile to Christianity as such. . .

For her part, the Church in the United States is called, in season and out of season, to proclaim a Gospel which not only proposes unchanging moral truths but proposes them precisely as the key to human happiness and social prospering. . . . The Church’s defense of a moral reasoning based on the natural law is grounding on her conviction that this law is not a threat to our freedom, but rather a ‘language’ which enables us to understand ourselves and the truth of our being, and so to shape a more just and humane world. She thus proposes her moral teaching as a message not of constraint but of liberation, and as the basis of building a secure future. Benedict XVI, January 19, 2012, Address of His Holiness Benedict XVI to the Bishops of the United States of American on Their “Ad Limina” Visit.

So, yes, restore natural law to its proper place—oriented toward being (“that which is”) and Being Itself (God). Nothing could be less arbitrary than that.

Peter V. Rother, Esq. is Associate General Counsel of a Fortune 500 company. He is a sometime Confirmation catechist and retreat speaker. He resides with his wife and five children in Minnesota.

This article, The Supreme Court and the Natural Law is a post from The Bellarmine Forum.
https://bellarmineforum.org/the-supreme-court-and-the-natural-law-2/
Do not repost the entire article without written permission. Reasonable excerpts may be reposted so long as it is linked to this page.