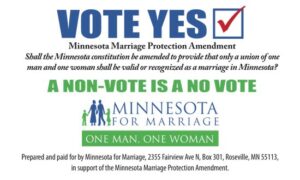 Ed. Note. The Bellarmine Forum is pleased to present this guest essay written by Richard Aleman on one of the most critical issues of our day. In Minnesota (as in other states) a vocal and well funded minority has called into question the very meaning of marriage and threatens to redefine it. Mr. Aleman has been one of the point men in Minnesota in defending marriage and we are honored that he has chosen the Bellarmine Forum for publication of his essay. Don’t forget also to check out the Bellarmine Forum’s Saving Christian Marriage for more resources on this most important issue!

On November 6th, 2012, Minnesotans will vote to decide whether or not to enshrine marriage as between one man and one woman in the state constitution. After a year of campaigning and educating the public about the meaning of marriage and the consequences of its redefinition, a growing number of undecided voters still do not understand why the amendment is important or even necessary.

In the 2009-10 legislative session, five bills were presented to redefine marriage. Other legislation introduced in 2011 sought to abolish marriage altogether. Activists have filed lawsuits attacking the constitutionality of marriage between one man and one woman, including a suit pending before the Minnesota Court of Appeals. These types of lawsuits have led to the redefinition of marriage in several states including Massachusetts and Iowa. But in 32 states the people have been given the opportunity to decide and they’ve chosen to define marriage as between one man and one woman. Therefore, because of the many attempts to redefine marriage, the Minnesota Catholic bishops are backing a state marriage amendment that will insulate marriage from judicial or legislative activism and place the fate of marriage in the hands of its citizens.

Aristotle described friendship as one of the token goods of human life. But courtships, friendships and other arrangements—while valuable—are not marriage. In fact, government does not regulate these relationships precisely because, unlike marriage, they do not serve a public purpose.

The essential public purpose of marriage is to attach men and women and tie them to any children born of their union. When men and women come together they have sex and sex makes babies. This relationship, natural to and springing from the complementarity of the sexes, holds parents responsible for the care and protection of any children born from their marriage. But it also provides enormous goods for all of us. Marriage regenerates society, fosters strong community, and is productive for the common welfare.

The environment our children are raised in plays a significant role in their future contribution to and the benefits they provide society, so government recognizes what studies have concluded: the best life chances of children are in homes raised by their mom and dad. As the social science clearly demonstrates, children raised in an intact home are less likely to grow up poor and are more likely to contribute productively to society.

The Minnesota Marriage Amendment does not take away any rights. In fact, the amendment does not change current law in any way. It merely upholds what is already in the current statute and protects it from the vulnerability of legal challenge. Hospital visitation rights, conveying or bequeathing property, all of these and more can be obtained through private legal contract.

Opponents claim the Minnesota Marriage Amendment will strip same-sex couples of their right to freely marry. They also claim this amendment limits the “freedom” to marry whomever one loves. What they won’t tell Minnesotans is that same-sex “marriage” does not exist in Minnesota law and thus the amendment does not remove any pre-existing right. No one has a right to marry whomever one loves either. Indeed, as same-sex couples cannot carry out the public purpose of marriage, they do not qualify for a marriage license. Neither does the psychologically disabled, siblings wishing to marry, adults and children, or polyamorous couples.

It is fully acknowledged by the opposition that marriage licenses should only be extended to two consenting adults. Yet, if marriage is simply “love and commitment” as they claim, if marriage does not boast of any conjugal significance and is only about L-O-V-E, it follows that groups who oppose the amendment cannot reasonably deprive anyone of marrying, regardless of the number of persons or non-humans involved. In fact, if the public purpose of marriage is to affirm romantic relationships, there is no reason why government should be in the marriage business at all because, to paraphrase G.K. Chesterton, when marriage means everything it means nothing.

Let us also remember that when speaking of rights we cannot forget the voice of the most vulnerable members of our society. Tragedies aside, it is unjust for children to be intentionally deprived of a mother and father. When marriage is treated as an adult-centered institution catering to the desires of adults instead of a child-centered institution revolving around the needs of children, as we’ve seen with no-fault divorce, it is the kids who suffer.

Same-sex marriage proponents often claim their struggle for “marriage equality” is no different than the prohibition faced by interracial couples who wished to marry before the 1967 U.S. Supreme Court decision struck down anti-miscegenation laws. The problem for same-sex advocates is this case asserts that marriage is fundamentally procreative, the basis for marriage they deny exists.

Those against interracial marriage opposed it for eugenic reasons. From their point of view intermixing the races would result in children being born of inferior stock. In other words, their primary objection to marriage between the races was that should they obtain a marriage license, they would procreate. The U.S. Supreme Court disagreed with their prejudicial views but also affirmed that because men and women have a fundamental right to procreate, they have a fundamental right to marry. In both cases, those opposed and those for miscegenation admit the basis of marriage is procreation.

What of those who say that marriage as an institution predates government, therefore government has no business defining marriage either way? Although in theory no person or government authority can truly (re)define marriage, make no mistake, marriage will be defined and its consequences on the common welfare will impact families one way or the other.

Redefining marriage institutionalizes injustice upon the citizens of Minnesota because it creates the legal fiction of same-sex “marriage” and the irrationality that genderless marriage and marriage between one man and one woman are equal. But they are not the same and therefore not equal.

Apples and oranges are apples and oranges. While we are entitled to fair treatment in society, it is not discrimination to treat different things differently. However, once the law imposes the “equality” of these two very different relationships, it will be discriminatory to say or act as if they are not. Moreover, ideas have consequences and changing the essentials of marriage will require public resources to promote the moral equivalency of traditional and same-sex “marriage” as we have seen around the world. Indeed, threats to religious freedom, economic liberty and free speech rights are ubiquitous.

The bishop of Alcala, Spain, Bishop Reig Plà is currently facing prosecution for a homily he delivered on Good Friday in which he warned gays of the health dangers posed by their lifestyle. Gay-straight alliance groups are imposed on Catholic schools in Canada. The mayors of D.C., Chicago, and Boston have publicly stated that businesses which oppose marriage “equality” have no place in their cities. Catholic Charities in two states shut down their foster care and public adoption programs after being forced to choose between following their beliefs and providing services for same-sex couples. Mandatory education in Massachusetts exposes children to the moral equivalency of same-sex marriage without parental recourse. Legitimate, peer-reviewed studies are challenged because the facts do not fit an inconvenient truth that children who are raised by their own parents fare best.

Jesus embraced every person, not every idea. We love our friends and relatives with same-sex attraction, but that doesn’t mean they have the right to redefine marriage for everyone. The government’s charge to oversee the good of society and protect the weakest and most vulnerable is a compelling reason for its support of marriage between one man and one woman and encouragement of the ideal environment for the development of children. Minnesotans should vote yes because marriage is unique and unlike any other in its capacity to bring forth new life and serve the well being of children and all of society.

Richard Aleman is the Outreach Coordinator for the Minnesota Catholic Conference on the Marriage Amendment.

This article, Understanding the Marriage Amendment is a post from The Bellarmine Forum.
https://bellarmineforum.org/understanding-the-marriage-amendment/
Do not repost the entire article without written permission. Reasonable excerpts may be reposted so long as it is linked to this page.