What Has the Pro-Life Movement Accomplished Since 1973?

In the opening scene of Mel Gibson’s The Passion of the Christ, we see Our Lord enduring the Agony in the Garden, and the devil telling Him, “No one man can carry this burden… It is far too heavy. Saving their souls is too costly.”

Working in the pro-life movement, we often hear a similar message from our opponents: You don’t really think you can end abortion, do you? Why do you even bother trying? You’re wasting your time!

When we consider that still today, over one million members of the human family are annually killed by abortion since the Supreme Court made abortion on demand legal in all 50 states with its Roe v. Wade and Doe v. Bolton decisions 41 years ago this month, it can indeed seem as if we’re wasting our time. But we need a different perspective.

Last year, on the 40th anniversary of Roe v. Wade, the staff of the Pro-Life Action League, under the direction of our executive director, Eric Scheidler, published a series of articles highlighting the Top Ten Accomplishments of the Pro-Life Movement since 1973. These are outlined below, in abbreviated form: 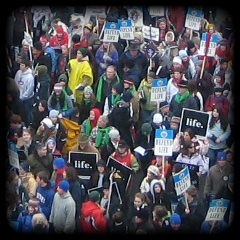 #10: We have kept abortion on the front page. Following Roe, our opposition thought abortion was “settled law,” and that Americans would quickly fall in line. But we’ve refused to give up and go home, and we’ve continued to keep abortion controversial.

#9: More and more Americans are calling themselves pro-life. Notwithstanding an endless barrage of propaganda against pro-lifers and our beliefs, we’re increasingly winning people to our side.

#8: Most doctors now refuse to do abortions. Our protests and education campaigns have had an impact on the medical community, and now the shortage of abortion providers is creating a crisis in the abortion industry—which has no unified strategy for solving it.

#7: Hundreds of abortion clinics have been shut down. Early on, abortion advocates wanted to “mainstream” abortion into hospitals and doctors’ offices, but we’ve largely contained abortion to free-standing clinics—and we’re shutting them down one by one. In fact, 2013 saw a record 87 surgical abortion facilities shut down nationwide, bringing the total number of surgical abortion clinics to 582—a 73% drop from a high of 2,176 in 1991.

#6: Countless pro-life laws have been enacted at the federal, state and local level. Measures like the federal partial birth abortion ban and state parental involvement laws both educate the public on the horror of abortion and save lives. Recent years in particular have seen a proliferation of measures at the state level, with more pro-life laws passed between 2011 and 2013 than in the entire preceding decade.

#4: We have helped women find healing after abortion. Abortion harms women, especially spiritually and psychologically. The pro-life movement has been living up to its duty to help them by connecting them with groups like Project Rachel and Rachel’s Vineyard, among countless others.

#3: The 55 million victims of abortion have not been forgotten. Dozens of actual gravesites of aborted babies, along with hundreds of other memorial sites—the vast majority of which are located in Catholic cemeteries or on Catholic parish grounds—have been erected across the country in answer to Our Lord’s promise, “Blessed are they who mourn, for they will be comforted.”

#1: Countless babies have been saved by pro-life witness on the street. We will never know how many lives have been saved through the individual witness of pro-life activists out in the public square or on the sidewalks in front of abortion clinics—but God knows.

All this having been said, we must not, to borrow a phrase from one of my grade school teachers, break our arms patting ourselves on the back. There is no simple solution to ending abortion outright, and we delude ourselves if we think victory will come overnight.

On the contrary, it will take many long and difficult battles to once again secure the legal protection of the lives of unborn children. In this regard, it’s helpful to think of the battle over abortion as being a bit like trench warfare.

But as we soberly reflect on the disastrous legacy of the Roe v. Wade and Doe v. Bolton rulings—over 55 million dead and a society deeply wounded—may this overview of our accomplishments give us courage and confidence moving forward.

John Jansen is the director of Generations for Life, the youth outreach of the Pro-Life Action League, founded by Joe Scheidler in Chicago in 1980. He and his wife, Jocelyn, are the proud parents of seven children.

This article, What Has the Pro-Life Movement Accomplished Since 1973? is a post from The Bellarmine Forum.
https://bellarmineforum.org/what-has-the-pro-life-movement-accomplished-since-1973/
Do not repost the entire article without written permission. Reasonable excerpts may be reposted so long as it is linked to this page.