What Our Grandparents Have Always Done

I’ve been following opera and Italian food expert Fred Plotkin for a number of years now. Politically, philosophically (in large measure) and theologically, we would likely find ourselves opponents. He is a self-described “pleasure activist and egalitarian,” whereas I assent to an orthodox understanding of a divinely ordered hierarchy in the universe and recognize–in a phrase that may be reminiscent of Tolkien–that, generally, human life is one long Lent with the occasional glimpses of the ultimate feast. (This is not to say that I am a defeatist or pessimist–not at all! We are on the winning side; it is just that, in this vale of tears, we suffer more defeats than we enjoy victories.) For all that, I suspect that Plotkin and I would be in agreement that those “glimpses of the ultimate feast” would be the goodness of creation and the wonderful blessings of food, family, art, music, conviviality, and human creativity. 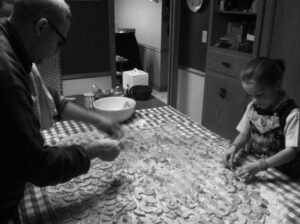 I recently listened to a BBC Radio program entitled “Food in Opera” wherein Plotkin speaks of not only the importance of food as part of the stories in opera, but also its importance to the composers themselves. (The fact that Mozart subsisted largely on strudel for a part of his composing life was especially intriguing to me, a strudel maker!) In a certain sense, food, drink, music and the creativity required to prepare them all, provide us glimpses into the spiritual nature of man and are proofs of a loving God.

What has attracted me over the years to Plotkin and his commentaries on food, in particular, is his championing of the Slow Food Movement. The Slow Food Movement was a reaction to the rise of the fast food culture and the resulting diminution of local culinary cultures. The reverberations affected what was once so common as to be unquestioned: the family meal, the desire for growing or raising one’s own food (even a potted tomato plant in the big city!), and preparing one’s own meals. The movement found its symbolic origin when Carlo Petrini led a protest against the inclusion of a McDonald’s near Rome’s historic Piazza de Spagna. Their battle cry: “We don’t want fast food, we want slow food!”  While I will not go so far as to support certain political positions that may be espoused by leaders of the movement, the message of the movement itself is a good one. Oftentimes one will not find defenders of tradition in such precincts, but commentators John Schwenkler, Rod Dreher, and the indomitable Joseph Pearce have shown otherwise. From my perspective, this is nothing other than what our grandparents have always done. It is interesting that hipsters, foodies, yuppies, the liberal elite and fellow travelers seem to have a hold on this issue, but it is a truly human issue and one which speaks to the very roots of our common humanity. Indeed, they are really the “Johnny-come-latelys” to what grandma, grandpa, and anyone with a large family has always done!

I have written elsewhere about the freedom that comes with cultivating one’s own garden and the virtues that attend to the growing of one’s own food. I would like to extend the argument and suggest that one grows in virtue by preparing one’s own food and sharing it with family and friends. What was once so common as not to be questioned is now a novel and even rare occurrence. The business of the modern world and the high speed technological wonders we have created have certainly provided a standard of life–at least in the US–that is second to none. But have we lost some of our rootedness as human persons? Have we lost morals and manners and basic human communication for the sake of convenience? Has our divorce from the earth led to a rootless, and therefore lifeless, culture? In other words, have we become clever machines? This same rootlessness seems to echo in other areas of our lives such as worship, law, politics, and education as well. 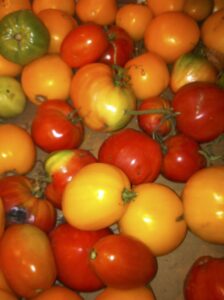 Perhaps we need to take our time; grow our own basil and tomato plants and make our own bruschetta. It takes time–indeed it is slow–but the rewards around the table (and beyond) will be worth it. More to the point, friendships will be cultivated, memories made, and a common sense approach to human life will return. Few are those who will assign a trip to McDonald’s as memorable, but most everyone of a certain age (please God may it still be the case for future generations) remembers the smell of grandma’s kitchen, or the homemade sausage and kraut that grandpa made, or the five hour long meal with a generous portion of wine at that little Mom and Pop trattoria off a side street in the shadow of Santa Maria Maggiore in Rome. There is some deep need in the human heart that is satisfied by these “glimpses of the feast” and there is a deep commonality with our fellow man in pursuing the same. Like the music of Mozart, it may bring people together–people as diverse as Plotkin and DeJak–and serve as the soil in which the seed of the faith may take root. After all, I recall several very pivotal moments where the God of the universe chose a meal in which to communicate sublime mysteries. Accipite et manducate…these are the words of Eternal Life. They are also the words of grandma and grandpa.

This article, What Our Grandparents Have Always Done is a post from The Bellarmine Forum.
https://bellarmineforum.org/what-our-grandparents-have-always-done/
Do not repost the entire article without written permission. Reasonable excerpts may be reposted so long as it is linked to this page.