A Priest’s Perspective on Fallen Away Catholics 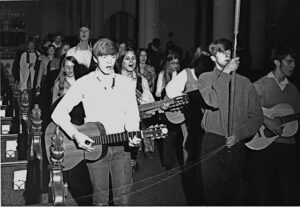 Editor’s Note:  Fr. George Welzbacher is a priest’s priest.  He is the pastor of the Church of St. John in St. Paul, Minnesota.  The longtime history professor, pastor, and commentator still continues to educate well into his 60th year of being a priest.  Fr. John Zuhlsdorf recently paid tribute to him on the occasion of the anniversary of his ordination.  A solid and faithful priest during one of the most tumultuous periods of the Church’s history, his perspective on things ecclesial and political is formidable.  We offer here, Father’s Pastor’s Page from the January 1, 2012 parish bulletin from the Church of Saint John.

New Year’s Day prompts the backward glance as much as the hand-over-the-eyebrows squint into the future. January, after all, is named for Janus, one of the ancient Roman pagan gods, who, as guardian of the city gates, is depicted double-faced, searching for enemies both to the right and to the left. I’ll forgo any speculations about the future, for whatever they might be worth, to restrict my thoughts instead to the past, and not so much to the recent past as to the last half century or so, with a focus on the vigor-or the lack thereof-of the Catholic faith in America.

One must start with the ugly fact that in today’s America the second-largest faith-identified grouping or, if you will, “denomination”, is that of fallen away Catholics. In probing for an explanation of this grim reality, I would point to three major factors:

Factor #1: irreverence in the liturgy, leading to anger, disgust and alienation.

A widely prevailing spirit of frivolity-and frivolity is a very good word-with grotesque improvisations contrived in the hope of making our religion “more meaningful”, with “a let’s have a party to show we’re people of joy” sort of animating spirit, has had the predictable effect of turning away the truly devout as well as those who, if less devout, can lay claim at least to good taste. Such dreadful disfiguration of the liturgy sprang from the misconception that the purpose of the liturgy is to entertain, to celebrate our own togetherness, that is to say, to celebrate ourselves rather than with proper sobriety and humble awe to worship Almighty God. One thinks of the 1960’s popular “hymn”: “Here we are, all together as we sing our song, joyous-LY.

Factor #2: The widespread embrace of a spurious Catholicity that flaunts a take-it-or-leave-it attitude towards the teaching of the Church.

Beginning with a rejection of the Church’s moral code, this attitude, like an infection, spread swiftly to the highest reaches of dogma. This new “understanding” (a.k.a. debasement) of what it means to be a Catholic was fostered by the revolt led by defiant priest-theologians against the papal encyclical Humanae Vitae, issued by Pope Paul the Sixth in 1968, reaffirming the Church’s age-old insistent teaching that contraception is a grave disorder. Following the lead of such pandering prophets as Father Charles Curran, Father Richard McCorinick S.J., Father Richard O’Brien, and Father Robert Drinan, S.J., far too many of our nation’s parish priests as well as those teaching in our Catholic schools assured the laity that the practice of contraception would in no way work to the prejudice of their being perfectly good Catholics, entitled to receive Holy Communion without a second thought, no matter what the pope had said. (By the way, the aforesaid four false prophets also assured Catholic members of Congress that, provided that they remained “personally opposed” to abortion, they could cast their votes to support it, in perfectly good conscience, an evil counsel which begat, with amazing speed, a transition from tolerance of abortion to its enthusiastic promotion. Witness Ted Kennedy’s fighting tooth and claw to organize opposition, highly successful opposition, to the Senate’s confirmation to the U.S. Supreme Court of the superbly qualified Robert Bork, the distinguished jurist who, had he been confirmed, would surely have joined with like-thinking colleagues in seeking to reverse Roe v. Wade. These priest-peddlers of theological delusion, in proclaiming that the Church’s age-old teaching on a fundamental moral issue was simply wrong, were saying in effect that the Holy Spirit had failed in the mission given Him by Christ, Who promised at the Last Supper (John, Chapters 14, 15, and 16 passim) that He would not abandon His apostles (and those who through their word would come to believe in His Name), leaving them all on their own as “orphans”, but that He would send the Holy Spirit as “Spirit of Truth” to “guide” them “to the whole truth forever”. If the Church has indeed erred in teaching for twenty centuries that the practice of contraception is a mortal sin, putting the soul of the unrepentant sinner in danger of eternal damnation, then Christ’s promise of the Holy Spirit’s guidance to His Church, against which “the gates of hell would not prevail,” (Matthew 16: 18), would have been shown to have been given in vain. And since the promises of God are infallibly kept, what further conclusion would have to be drawn about Christ and the Holy Spirit? No wonder, then, that, given the arrogant assertion that the Church had been wrong for twenty centuries with respect to contraception, the predictable next step would be to question whether all of its other teachings, including that of the Real Presence of Christ, body and blood, soul and divinity, in the Holy Eucharist, were not equally open to question. And if that was the case, why bother with the Church and its teachings at all?

Factor #3: Widespread ignorance among those calling themselves Catholic of what it is that the Church teaches on a whole range of subjects.

This ignorance is due in great measure to the abandonment of the Baltimore Catechism as a major tool in transmitting the faith to the young. The Baltimore Catechism had for many generations provided a clear, accurate and complete account of the articles of faith to which every authentic Catholic is as such committed. In the late 1960’s, as papal and ecelesial authority were under the gun and the liturgy in far too many a Catholic parish and in far too many a Catholic school was becoming a kind of circus, an arena for ludicrous innovation, the Baltimore Catechism was reduced to the status of a doorstop, its critics parroting the charge that the commitment of the catechism to memory by the young amounted to nothing more than-parroting. The so-called “rote memorization” of the Baltimore Catechism must now be replaced, so the exponents of New Thought declared, by the New Catechetics which, abandoning memorization of formulas, formulas, however, that were accurate and precise, would somehow secure a much deeper “understanding” of Christ’s revealed truth, one more closely related to the “real world” in which today’s young people lived. These mockers of “mere memorization” seemed to be utterly unaware of the important role of memorization in many another academic discipline. A historian for example who disdains to memorize dates can scarcely be called a historian (though of course there is vastly more to becoming knowledgeable in history than simply mastering chronology, but chronology is basic). A physicist or chemist needs to have the periodic table at his fingertips, and students of literature have long been aware that the best means of savoring the whole range of meanings and the complexities of rhythm in an important poem is to commit the poem to memory. Unsurprisingly, then, this elimination of memorization in transmitting the faith to the young, in the supposed interests of gaining a deeper “understanding” through recourse to pictures of Coca-Cola drinkers or skating parties, has produced a generation or two of nominal Catholics who have little or no knowledge of the Church’s teaching over a whole range of reality. And a faith you don’t know will do little to shape your life. And when faith doesn’t shape your life, then the secular culture will. And the secular culture in which we live today is toxic for religious belief.

Right at the start (in the mid-to-late 1960’s ) there were those who foresaw the ruin to which these three deviations would inevitably lead, and those who foresaw the catastrophe were anything but silent. But their voices, raised in protest at such pandemic madness, were dismissed as the cries of eccentrics totally “hung up” on the past, whose fixation blinded them to the bright promise of the NEW thought and the NEW way. Now, however, that the revolution has succeeded, its highly visible fruits are prompting second thoughts among many a former enthusiast.

This article, A Priest’s Perspective on Fallen Away Catholics is a post from The Bellarmine Forum.
https://bellarmineforum.org/a-priests-perspective-on-fallen-away-catholics/
Do not repost the entire article without written permission. Reasonable excerpts may be reposted so long as it is linked to this page.