All Their Wars are Merry, And All Their Songs are Sad

For the great Gaels of Ireland
Are the men that God made mad,
For all their wars are merry,
And all their songs are sad.
–G.K. Chesterton

There is a strange phenomenon on the east side of Cleveland, Ohio. It is probably the one place in the world where Irishmen have largely been raised on Slovenian sausage (klobase). Perhaps the commingling of the Irish and the Slovenians are the result of this authentic ecumenism of beer and sausage, something our bishops should consider before any further attempts at discussions with the fallen away brethren. (I suspect we might get further.) But I digress. I thought it appropriate to mark this St. Patrick’s Day with something that speaks of the great faith of old Hibernia. 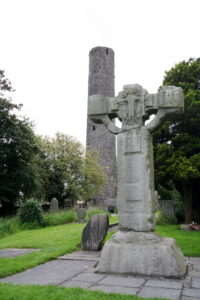 I recently heard a podcast of the radio show “Travel with Rick Steves” which featured a perspective on traditional Irish music.  It seems that a younger generation of Irish are rediscovering the old folk songs and the old Irish language–the mystical and haunting vesture that clothed these songs. While not explicitly theological, what was fascinating about the program was the fact that they were maintaining and promoting a tradition that truly was born of Catholic Ireland. The history of the Irish people–not unlike the Polish people–is one marked by tremendous suffering and loss. From the physical topography and geography of the Emerald Isle to the political domination by outside powers for much of its history to the very language itself, the Irish people have an understanding “in their bones” what is meant by the valle lacrimarum. What was it that allowed them to survive? I think all would agree that there is a particular Irish temperament or characteristic that cannot simply be dismissed as a survival instinct. It is deeper than that because it hits the intersection between the individual human person and Being itself. It is that very characteristic that allows them to be happy warriors, never giving up the fight. It is a desire to win; to overcome the big guy or the bully neighbor. Yet this is coupled with a melancholy. A melancholy that laments the fact of the need for war and hopes for a time when the wars will be over. I think Chesterton hit the nail on the head with his verse that captures this Irish temperament.

This temperament, I think, still holds; though, in varying degrees, the Irish may have forgotten their uniqueness. Sometimes worldly success overshadows the ultimate success that is the subject of their songs and the faith of their fathers. The Irish never become so less themselves as when they become the very big and powerful guy that they for so long fought; and when they lose their melancholy of the valle lacrimarum. In both cases, they have “taken the soup” and traded their freedom and their faith for slavery. How many countless Irish politicians and prelates in the United States have preferred the soup of acceptance by the powerful to the fierce freedom of the faith planted by St. Patrick?

Indeed, it is a moment of self-reflection for all of us as we approach St. Patrick’s Day. I’ve learned a lot over the years from guys named Hurley, Flannery and Rice (all of whom ate Slovenian sausage, by the way). If “everybody is Irish on St. Patrick’s Day,” I hope that ours is an authentic Irish–one that draws inspiration from the authentic spirit of Ireland. The Ireland of the saints, scholars, the poor and the struggling; the Ireland of happy warriors, witty poets, and laments for the valle lacrimarum and that which brought us to final victory:

This article, All Their Wars are Merry, And All Their Songs are Sad is a post from The Bellarmine Forum.
https://bellarmineforum.org/all-their-wars-are-merry-and-all-their-songs-are-sad/
Do not repost the entire article without written permission. Reasonable excerpts may be reposted so long as it is linked to this page.