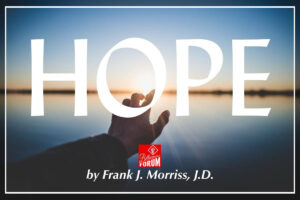 Frank Morriss on Hope – there has never been a Christian age that has not tempted believers against Hope, often doing so after a determined assault against faith 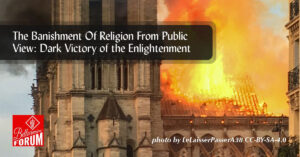 The Banishment Of Religion From Public View: Dark Victory of the Enlightenment

Twenty Years Ago, the Forum warned of the trend to push God aside and deify man – and the social effects sound just like today. Notre Dame is burning indeed! Part III

Same Sex Marriage: When Two Can Never Be One

The term oxymoron is derived for a Greek phrase meaning “pointedly foolish.” And that is exactly what the talk about same-sex “marriage” amounts to, for it contains within itself a contradiction as great, say, as the idea would be for motionless football or batless baseball [ed. note: or baseball card packs without bubble gum]. Were…

Restructuring The Church Into Their Own Image: RENEW Bible Studies

REPRINTThis article originally appeared in the Wanderer Forum Foundation’s Quarterly in 1992. We find that the analysis herein is worth revisting today: When Mr. Morriss spoke of “restructuring” the Church then, do you see it around you today? What about his treatment of bible studies — was he right? Have you encountered this today? This… 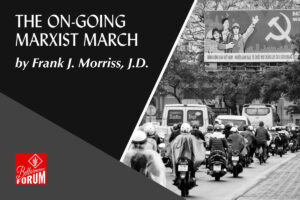 From the Clintons to mainstream catechism of the day, Frank Morriss exposes of the Community Organizing / Liberation Theology in the US Catholic Bishops as Gramsci’s adaption of Marxist Revolution.

The Highjacking of America’s Children

Frank Morriss eviscerates the onset of Outcome Based Education (OBE) and its effects on dumbing our children down. An expose of the history even back into the FDR era ans the Fabian socialist roots to create this system of education and its goals.

Liturgy for the American Church Making Worship the Hostage of Ideology

Liturgy for the American Church Making Worship the Hostage of Ideology Frank Morriss The purest worship is adoration of God as He has revealed Himself to us and as our highest abilities respond to that revelation. Prayers of petition, recognizing God’s providence, are also legitimate worship, speaking our utter dependence upon our heavenly Father and…