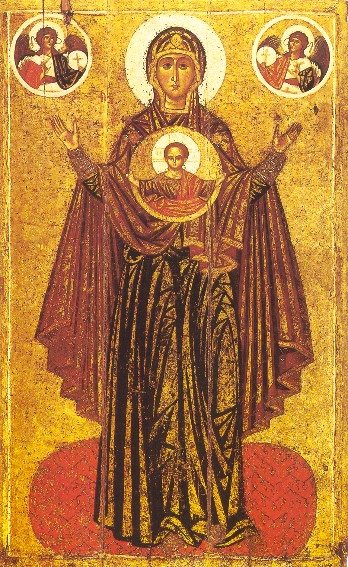 Today, in Eastern Churches, special services and hymns are sung just after compline to the Blessed Mother. It may seem like an odd practice to American lent goers — after all, Fridays are well known in the Roman Church for the Stations of the Cross. However, given that Mary carried God to us, and hence her title as Theotokos, and the feast of the Annunciation always occurs in Lent on March 25, I’ve grown quite comfortable to this age old practice. It is done the adequately praise Mary, who said yes to God, and bore up for us Our Savior.

On May 4th, 1746, Pope Benedict XIV (take care reading those Roman numerals), issued an indulgence to the faithful who recite a hymn known at the Akathist to the Theotokos. In my opinion, he was very late to the party for the prior 1120 years had been filled with the memorialization of Mary’s crushing defeat of the Persian Avar fleet that sieged Constantinople. Just as she would later for Lepanto, Mary has a long, long history of miraculous victories over invaders.

In 626, roughly 300 years after Constantine saw the Cross in the sky, the Byzantine Empire faced a similar calamity — invasion by the Avars and Persians. Constantinople, obviously named for Constantine, had been surrounded by heavy equipment and a giant fleet assembled on the sea. St. Romanos the Melodian is said to have had an angel appear to him, and gave him a scroll that he was to eat and swallow. From this, the Akathist Hymn was given. The patriarch and the faithful gathered in the Hagia Sophia and sang the hymn throughout the night, standing the whole time while singing these praises to the Blessed Mother of God, Mary.

The next day a hurricane suddenly arose and demolished the fleet. The siege was destroyed. Obviously, the hymn was a hit, and was named Akathist (literally, “not sitting”) in honor of the people having sang it standing all night.

Over subsequent centuries, icons commemorating Mary, and the praises of her life sung in this hymn were such as this one: 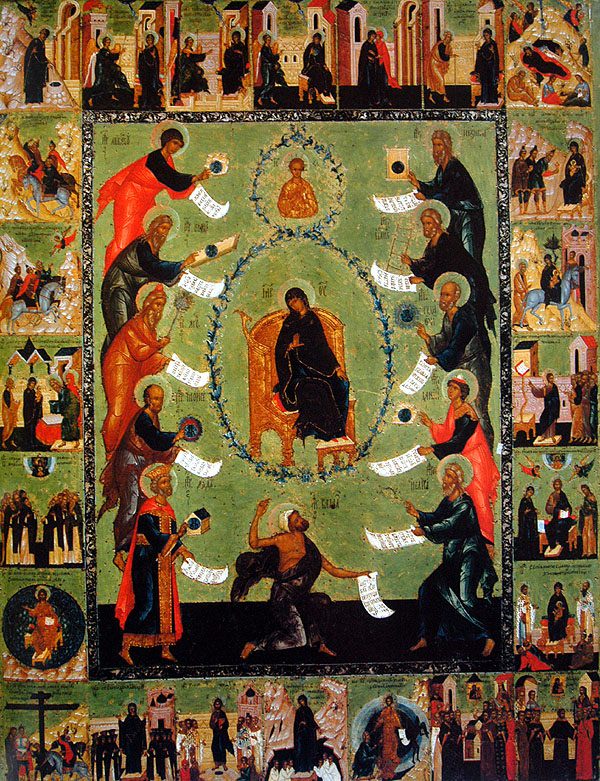 Not to stop delivering miracles, this icon shown was located in the Hilandar Monastery, when, in 1837, a fire swept the monastery. monks gathered around this icon and sang the Akathist. The fire destroyed everything around them, but the monks and this icon were saved.

The hymn itself is long, comprised of 24 sections sung in plain chant. Each section has alternating long and short pieces, prayers interspersed, and a memorable tone.

In the Melkite Church, there is a kontakion repeated, the words of which are worth reading, let alone chanting, as a little prayer to Mary:

Triumphant Leader, to you belongs our prize of victory!
And since you saved us from adversity, we offer you our thanks:
We are your people, O holy Theotokos!
So as you have that invincible power, continue to deliver us from danger
That we may cry out to you:
Hail, O Virgin
And Bride ever pure!

I hope to post audio later, so come back for an update. In the meantime, click here for an account, with pictures, of Pope John Paul II reciting the Akathist in 2000.

The Legion of Mary has used the hymn to open its Congress as well. They have a full copy of the text of the praises posted, click here.

This article, Before Lepanto, Mary became known as the Invincible Champion, Triumphant Leader is a post from The Bellarmine Forum.
https://bellarmineforum.org/before-lepanto-mary-became-known-as-the-invincible-champion-trimuphant-leader/
Do not repost the entire article without written permission. Reasonable excerpts may be reposted so long as it is linked to this page.