I’ve been fascinated by car wrecks, explosions, catastrophic accidents and over the top forensics for a long time. As a kid, the idea of Quincy M.E. piecing together a mystery from the hint of a piece of material found blew my mind. As I got older, I found out that pathology like Quincy requires being around decayed bodies. The actual smell was enough of a deterrent to prevent me from chasing down the dream of forensic medical examination. I thought I’d gag all the time.

When I was older, as a chemical engineer, I got into catastrophic analysis and forensic analysis of chemical plant accidents. Later, I’d get into general accidental fatalities, even completing a commissioned study for OSHA. The fascination of piecing together seemingly unrelated facts is like an irresistible puzzle. For instance, at the scene of one explosion site, there was a pair of shoes and clothes sitting on the floor. Did the guy disrobe before the explosion? No. The explosion blew him right out of his shoes and clothes. They fell to the floor right were he had been standing. Strange, right? Where else can you see such extreme bits of physical phenomenon? The guy was hurt? No. Apart from some ringing in his ears, he got up and walked away. If you saw the damage to the building form the explosion, you’d never believe it. Piecing together the natural phenomena to explain how that happened is enjoyable to me. That’s the puzzle aspect.

I thought I was leaving that world when I went into law. Little did I know that in some areas of law, it really is like accident forensics. Many areas of law deal with human extremes, accidents, and as I’d find out when clerking for a state Supreme Court, fatalities. During my time clerking, I got to see thousands of cases. It took me a while, but I began to see that everything I liked and was fascinated by in actual catastrophes was also present in litigation. The bonus is that the smell of human catastrophes doesn’t make me gag the way a morgue would. Turns out that the mix of human nature, dialogue, and physical evidence is even more addicting than physical catastrophes.

So, a while back I chanced to hear a guest speaking on a secular radio show. During the interview, the guest begins to discuss his history. He had gotten an MBA. At some point, he went into the seminary. He began to talk about encountering a homosexual subculture in that seminary. He mentions that it was the pontifical seminary. The only one in the United States, he said.

I knew he was talking about the Josephinum in Columbus Ohio. Recall that, during the Cardinal Law reports in 2002, it was reported that the Josephinum had allegations of homosexual scandals going all the way back into the 60s. (Ex-Classmates Contradict Cardinal Law’s Deposition, Boston Herald, August 21, 2002 available at BishopAccountability). I’ve reported on news allegations of Bernadin and Pilarczyk at that seminary before, when commenting on how AmChurch attacks a good parish. I had also heard horror stories from conversations among concerned Catholics in Cincinnati when I was younger.

He went on to talk about how he recognized Soviet-style KGB bullying in the way psychologists were used. He spoke of his naivety when he entered the seminary, but how he was surprised when another guy that worked in the library with him began to open up to him about homosexuality, and a homosexual agenda. The next day, the guy would not speak to him — and he said it was because the guy found out he was not “one of them.”  From that point on, Tony began to see patterns and groups of people in the seminary. His past business experiences helped him to see organized activity among the homosexuals.

He took notes, he recorded conversations. Eventually, he left, but only after he had been confronted by the psychologist, the Vice Rector, and several encounters with the Rector. 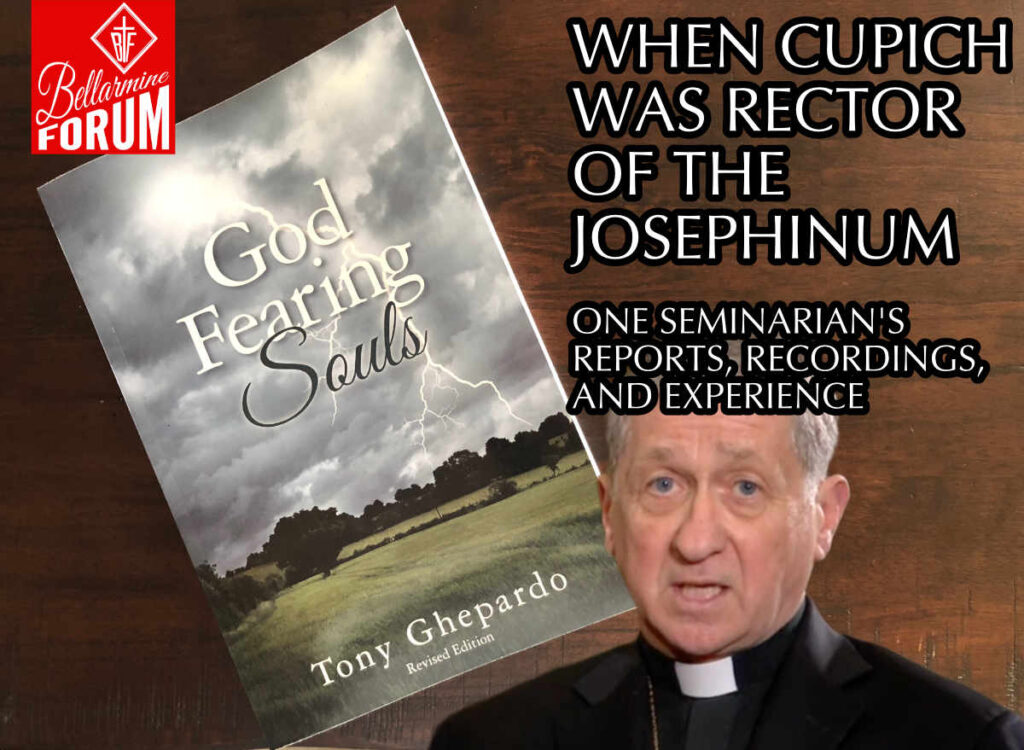 I was hooked. I thought, “When was he there?”  Was this when Cupich was there or Pilarczyk’s tentacles? Turns out 1995 to 1996. Bingo. That’s at the end of Cupich’s tenure as Rector.

Tony scrubbed all names from the book. He has pictures of letters he sent and those he received from various Clergy and Curia. Those are redacted, but you can piece together who, what and where with some work. I don’t blame him for redacting it all, though. He was threatened by the rector with full legal action if he would ever talk about his experience in the seminary.

This will be fascinating.

I got the book. God Fearing Souls by Tony Ghepardo (using this link generates a small commission for the Bellarmine Forum).

I want to make something clear. Tony admits that he put together a number of relevant life experiences, but they are kind of a hodge podge. It works, though.

The book is written in a style that can be a little jolting at times — the author speaks of himself in the third person, and there’s a narrative style that isn’t quite fiction, nor is it quite investigative report. In many cases, his conclusions or thoughts are mixed into the middle of a factual account. Tony makes it clear what is what, but this writing style, in some parts of the book is closer to reading a police report with notes. In other places, it reads like a novel. Overall, once I adjusted to this, the book is quick to read. Here and there, Tony mixes in some scripture quotes as a contrast to what he was being told by people in the seminary. It works.

What you get as a reader is a bird’s eye view into the seminary experience. You get to see the seminary that was run by Cupich. You get recorded conversations of Cupich with Tony. If you like crime stories, detective shows, and, like me, some morbid fascination with the forensics of human catastrophes, then there is plenty in this book. You’ll really enjoy it.

If you don’t share my morbid fascination with train wrecks, this book is still worth reading because you see the human side of how guys that want to become a priest are treated. Reading conversations between the psychologist and Tony make you realize that once Tony was identified by the homosexual crowd as a problem, the Vice Rector begins to use the machinery to ruin him and pressure him into mistakes. Of course, that’s a conclusion based on my opinion.

You get Tony’s research into the Communist-funded homosexual infiltration into the Church. The same homosexual subculture many bishops and even the Pope are refusing to admit exists. It’s there. We know it’s there. This book is a police report of an accident scene in Columbus Ohio at the Josephinum. Get it, I recommend it highly.

This book is a police report of an accident scene in Columbus Ohio at the Josephinum Seminary. The author was run over by the Homosexual contagion in our Church. And Cupich was the one in charge.Click To Tweet

Tony’s experiences and the conversations and evidence he reports in the book will let you make your own mind up about the activities in our seminaries and how this catastrophe works. You’ll enjoy this view into Cupich, too.

From the time when the Vice Rector first confronts Tony, and then puts him into psychological evaluation, Tony decides that he must document what he’s experiencing. Ultimately, Tony decides that he must make it to be confronted by the Rector (Cupich) about his allegations of homosexual activity. Tony estimated that the Vice Rector was the smart one and the Rector was not as smart. The build up and his encounters with the seminarians, including their statements of why they think homosexuality is superior will surprise you.

Eventually, the Rector calls Tony in for meeting. The room is set up to make it difficult for Tony to record the comments of a Jesuit advisor, as they suspected he was using a recorder by then.

The Rector’s conversation is amazingly an echo of the things we hear Cupich say today.

He tells Tony that he will expel those 39 seminarians if he investigates them and finds them to be homosexual. Everyone believes it, but he tells Tony that the only way he’ll do that is to bring all 39 in to his office, and their parents. He keeps working on Tony’s resolve to survive the investigation of the others. Eventually, he forces Tony to write a retraction.

Even down to how he was told to leave, the book will make you realize how the subculture works. You’ll understand better these news stories we are seeing today. Just be sure you want to see the train wreck!

(affiliate link, please use it to support the Bellarmine Forum)

Our Lady of Sorrows, pray for us!

This article, Book Gives Recordings of Cupich as Rector, Homosexual Subculture at Josephinum Seminary is a post from The Bellarmine Forum.
https://bellarmineforum.org/book-gives-recordings-of-cupich-as-rector-homosexual-subculture-at-josephinum-seminary/
Do not repost the entire article without written permission. Reasonable excerpts may be reposted so long as it is linked to this page.