Can We Say “Socialism?” Nationalized education imbedded in a workforce-management system? Well, what would you call it?

Esposito was an Oklahoma businessman appointed to the state’s executive council for School-To-Work in the mid 1990s. In that capacity, a number of documents from SCANS – the US Secretary’s Commission on Achieving Necessary Skills – came to his attention and disturbed him greatly. Because he was vocal about his concerns, he was removed from the council.

Esposito opposed efforts to prepare American children for the global marketplace by subsuming local educational systems into a single entity with the country’s workforce: “[T]he vision [is] to create a ‘seamless web of human resource development’ (NCEE’s Marc Tucker, et. al.). The culmination is federally supported systemic education reform—or ‘School-to-Work’ (STW) workforce training from preschool through higher education, and beyond—in compliance with United Nation’s lifelong learning plans. More accurately, this is lifelong indoctrination for servitude—an important part of ’world-class standards.’ Targeting all schooling—public and private—STW reforms link all levels of what was a vehicle for educating and learning. Fully implemented, all schools will be vocational, all children will have a career path no later than 7th grade, and all children/adults will be credentialed through a national/international job certification system.” (Esposito, p. vii, emphasis in original)

The report documents this effort, quoting copiously from source materials. If one hasn’t already seen these, it’s worth the gander both for their historical perspective and as a foundation for understanding current developments. The Workforce Development system, begun in 1998 with passage of the Workforce Investment Act (WIA), is now fully entrenched. Together with its School-to-Work initiatives, the law created local and state boards as well as industry clusters (networks of associated businesses) across the country.

Still, the system isn’t as comprehensive as social planners intend. “While there have been pockets of success [in the in local public work-force system WIA started] throughout the United States, most would agree that we are a long way from a sustainable, systemic approach to workforce development that addresses a fundamentally transformed U.S. and global economy.” A “sustainable, systemic approach” is one that will provide “access to ongoing career management supports, longer-term career training and education programs, and timely, high-quality information about skill needs and occupational requirements.” (Introduction, p. 1) It will move from geographically-based management of the labor force to market-based and industry-based management. (p.11) And, it will intersect with the education system, with increasingly connected systems, organizations, and institutions. (2) 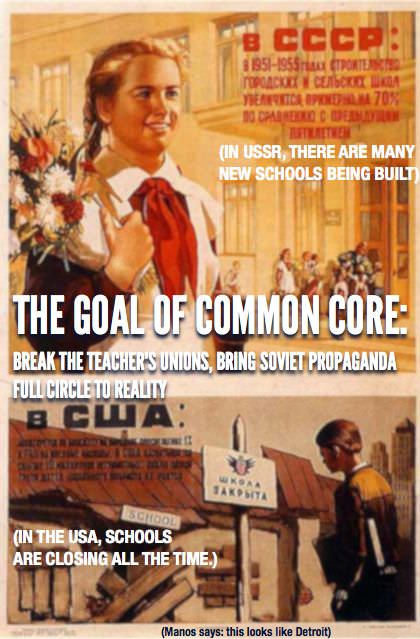 She’s mistrustful of the sudden organized opposition, however. “A handful of long-time recognized education researchers have opposed the Communist Core (Marxist) national curriculum for over 48 years with little support from the grass roots! All of a sudden there is this enormous national opposition to Communist Core (the new label for Maine’s mid-nineties Learning Results, and the 1970-present National Assessment for Educational Progress of which 60 % of the test items are politically correct-attitudinal. This phony, deliberately hyped opposition to Communist Core is spearheaded and supported by the national Heritage Foundation, which for the past 7-8 years has controlled Maine’s education system, and which has affiliates in most states. Former Commissioner of Education Bowen was groomed for his job when he headed up Maine Heritage. This hype, with another tax-exempt foundation, Pioneer, coming in to support home school leader, Heidi Sampson’s, anti-common core agenda, is very suspect.”

Why on earth would Iserbyt – who is utterly opposed to Common Core and has made it her life’s work to arouse concern about education “reform” – be leery of successful, organized opposition to Common Core? She explains that Heritage Foundation and Pioneer miss the salient problem: “The anti-Communist Core movement is very simply a red herring (diversion) to keep Americans from understanding and opposing the Trojan Horse: tax-funded school choice. This pro-tax-funded school choice agenda is supported by the Governor and Bowen who take their orders from the Council of Chief State School Officers, Florida’s ex-Gov. Jeb Bush, his Foundation for Excellence in Education, Bill Gates, Pearson, and IBM’s ex-CEO Gerstner. Gerstner has the gall to call for recommending to President Obama that he bring down all 16,000 public school districts with their messy elected school governance. He and other globalist corporate heads want the privatization of ALL education in order to implement the Soviet polytechnical workforce training system called for by Carnegie in 1934. All neoconservative (Trotskyitne) tax-exempt foundations, including the major player, the national Heritage Foundation, the corporate fascist globalist Council on Foreign Relations, and the Obama Administration all support tax–funded school choice.” (emphasis added) 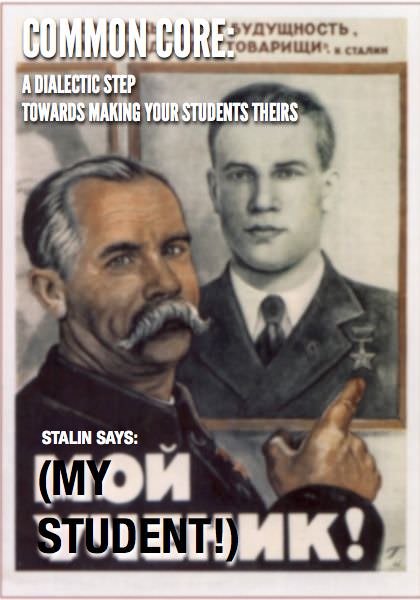 There are a lot of hard words in these comments but tax-funded school “choice” doesn’t provide “choice” for long. A comprehensive system that involves everyone can only allow so much latitude or the system doesn’t work (just ask the employers who will be forced to supply birth control in the U.S.’s new, universal health care system). “Communist Core is NOT the issue. Those fighting Communist Core better wake up and realize that even if they kill Communist Core, if they do NOT oppose ALL forms of tax-supported School Choice and Charter Schools, they will wake up one day and find that their children in their favorite tax-supported choice private school are required by federal law (regulations) to take the Communist Core assessment (test) they thought they had killed! Why? Because when an education entity (private or public) accepts one penny of federal money it MUST adhere to federal regulations regarding curriculum, testing, hiring, etc., etc.”

Meanwhile, the even bigger issue is the creation of a nationalized education linked to a workforce-management system – of which universal, nationalized health care is a piece. Is this really the direction we want to go?

Notes
(1) Joe Esposito, Tangled Web: The Mastery Learning/OBE/STW-TQM Connection, 2004.
(2) Kathy Krepcio and Michele M. Martin, “The State of the U.S. Workforce System: A Time for Incremental Realignment or Serious Reform?” John J. Heldrich Center for Workforce Development research report, Rutgers University, June 2012.
(3) Charlotte Iserbyt was Senior Policy Advisor, U.S. Department of Education, Office of Educational Research and Improvement (OERI), 1981-1983. Like Esposito, she was alarmed by materials that crossed her desk and eventually wrote The Deliberate Dumbing Down of America, concerning changes in “the American public education system … to eliminate the influences of a child’s parents (religion, morals, national patriotism), and mold the child into a member of the proletariat in preparation for a socialist-collectivist world of the future.” Iserbyt’s full comments can be read at Unmasking of Maine blog, 8-18-13: unmasker4maine.wordpress.com.

_____
ed. note:  Due to Manos’s graphics, we already had the Soviet Polytechnic institute propaganda as an earlier feature for one of Stephanie’s earlier posts on this topic: 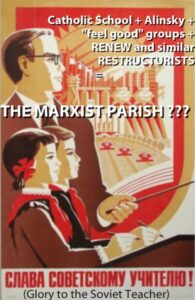 This article, Can We Say “Socialism?” Nationalized education imbedded in a workforce-management system? Well, what would you call it? is a post from The Bellarmine Forum.
https://bellarmineforum.org/can-we-say-socialism-nationalized-education-imbedded-in-a-workforce-management-system-well-what-would-you-call-it/
Do not repost the entire article without written permission. Reasonable excerpts may be reposted so long as it is linked to this page.