I was looking for something recently in my copy of Fr. John Hardon’s Modern Catholic Dictionary when I noticed an entry that caught my eye: 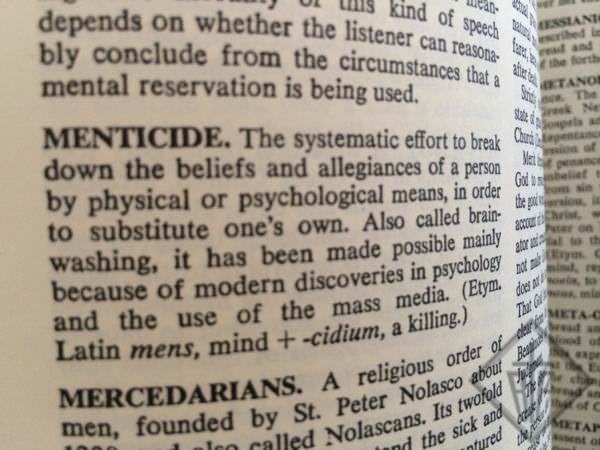 “The systematic effort to break down the beliefs and allegiances of a person by physical or psychological means, in order to substitute one’s own. Also called brain-washing, it has been made possible mainly because of modern discoveries in psychology and the use of mass media.”

Doesn’t that seem strange to be included in a Catholic dictionary? I wonder what Fr. Hardon had in mind when he selected to put that word in, and decided to keep it in.

Some of the clue is in his further explanation made possible by modern psychology and mass media. I know from where that comes:  Fr. Hardon, when speaking on mass communications and the Vatican II document Inter Mirifica, would always seem to work a quote from Marshall McLuhan into his talk:  “says McLuhan, ‘all of the media is engaged in a Luciferian conspiracy against the truth’.”  Obviously, Father had further strong words about mass media.

So was Fr. Hardon wanting to make it apparent that there’s a deliberate effort to kill minds?

Is it only by the media? He defines it as by psychological or physical means.

Any ideas out there? What do you think was in Fr. Hardon’s mind when he chose to put this word in the Catholic dictionary?

This article, Catholic Dictionary: Menticide? is a post from The Bellarmine Forum.
https://bellarmineforum.org/catholic-dictionary-menticide/
Do not repost the entire article without written permission. Reasonable excerpts may be reposted so long as it is linked to this page.