Cincinnati has long appeared to have a revolving door between the Masonic lodges and the Catholic Church. Having grown up there, I can recall discussions of various people who were both in Knights of Columbus and Masons, and rumors of parishes that were pagan experiments. People talk, and that sort of talk happened way before blogging.

In all of that talk there was always a pernicious discussion that the erstwhile vocations director for the Archdiocese of Cincinnati would wear a masonic ring. In that day, when then metropolitan, Archbishiop Daniel Pilarczyk, was placing such curious women and lay people as Barbara Fiand into the seminary for the “advancement of the laity,” as well as gutting the language of the Mass with ICEL, there was some rumors that would rise to the level of press reports. This rumor of a freemasonic vocations director was one of those, and The Wanderer reported what it discovered:

“[…] For psychologist Joseph Wicker, who screens candidates for the Archdiocese of Cincinnati, was until 1991 a worshipful master of Mt. Washington Masonic Lodge 642. Ray George, a spokesman for the Archdiocese of Cincinnati, told The Mt. Washington Press on May 8th, 1991, that he did not think that Archbishop Daniel E. Pilarczyk was aware of this fact, but “personally I don’t see where that would be a conflict.” George told The Wanderer that Dr. Wicker stopped his adherence to Masonry in 1991 and is now a practicing Catholic. That Dr. Wicker’s association with Masonry did not end until after it was disclosed publicly five years ago is troubling. And there are many instances of high-ranking, well-known Masons being buried as Catholics in good standing.”

(see Droleskey, T. “Masons Make the Church’s Case Against Them,” The Wanderer, July 1996).

So much for rumors as the spokesman himself verified the assertion. It’s a shame that the interviewer had not asked whether Dr. Wicker was wearing his masonic ring. After all, that was what the ordinary pew sitter was seeing.

Often times, these sorts of stories get characterized as isolated and therefore imply that it was an event not worth further consideration or meaning. Perhaps, but there was further strangeness in Cincinnati. Just a few years later, after Pilarczyk had installed butch-looking women to administrate a few parishes on the premise that there was a priest shortage, the Mercy Sisters built a new Healthplex on the East side of town, that, among other things like Reiki touch therapy, featured a “totem of salvation” in the lobby. Among the opening ceremonies, the Archbishop was there to bless the totem at the blessing of the complex.

Today, there’s still something to talk about in this regard. The current Grand Master of the Grand Lodge of Ohio is Norman J. Mick. The Grand Lodge reports on his bio that:

“He attended St. Ann’s parochial school in his formative years.  He later graduated from Hamilton Catholic High School.  His family’s strong religious background led him to attend St. Gregory Seminary to search out his vocational calling.  Later he went on to study Business Administration and Accounting at Xavier University.”

So he grew up Catholic in the Archdiocese of Cincinnati, and even sought a vocation early in his life. Today, his bio reports,

“Norman and Lois currently attend St. John the Baptist Church in Harrison, Ohio.  In previous Parishes, he served when needed as liturgist and on various committees and served as Fall Festival Chairman for many years.”

His bio continues to detail a very active life in the Masons, even noting that he “was coronated a Thirty-Third Degree Mason of the Supreme Council of the Scottish Rite, Northern Masonic Jurisdiction in September, 2003 at their annual session in St. Louis, Missouri.”  In other words, as if his selection as Grand Master of a Grand Lodge would indicate, he is not merely a casual Freemason — he’s very involved. Moreover, he’s a liturgist in Catholic parishes. (!)

There are two examples reported of active Masons involved in the Catholic Church in Cincinnati. Is it truly what Archbishop Pilarczyk’s spokesman said, not a conflict?

If there are two high level cases like this, then how much is unreported? I can recall in the mid-90s as I was involved in the Purcell council of the Knights of Columbus that there was open talk among members there to schedule events with concern for when the Moose lodge and Masons had their events lest some members who belong to both places be conflicted. There was an awareness and concern of some portion of the membership that were also Masons.

Is it just a Cincinnati phenomenon? Is Cincinnati really this unique? 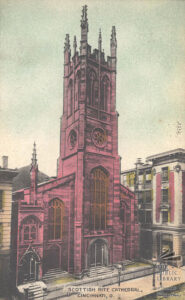 This article, Cincinnati’s Curious Masonic Church is a post from The Bellarmine Forum.
https://bellarmineforum.org/cincinnatis-curious-masonic-church/
Do not repost the entire article without written permission. Reasonable excerpts may be reposted so long as it is linked to this page.