Defending the Sanctity of Human Life with Fr. Ciszek 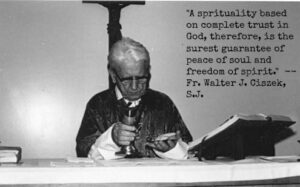 This month commemorates the 40th anniversary of the Roe v. Wade decision of the United States Supreme Court which held that an unborn child is not a person and therefore not deserving of protection of the laws of the United States. One of the first signs of a totalitarian government is the mastery of words and the redefinition of things to suit the political purposes of those in charge, i.e., the power elite. This is the very quintessence of pride and an outright rejection of humility in the face of reality. I choose the term “redefinition of things” on purpose; because it is very difficult for any totalitarian regime to exist where truth is generally acknowledged.

Is America at the point of being a totalitarian regime? Since the post-World War II era, it is hard to argue against that contention. When one considers the deaths of so-called non-persons reaching a level many more times that of American military deaths in the last several wars, he should recoil in horror. He should recoil even more so when he considers the cold calculation and precision with which these killings are carried out; the instruments of death, both chemical and technological; the intentions of the persons ensuring its institutionalization through government support and enshrinement in the public philosophy of the nation; and, most horrifyingly, the indifference of those who allow its propagation without protest.

In the wake of the horrible Sandy Hook massacre, the power elite scrambled to address the problem—not of hatred for human life—but of gun violence. Indeed the pretext is one of defending children from such evil in the future, but the same power elite have closed their eyes to the truth that there is a whole segment of children whom they have redefined as “non-children.” On the one hand they will take great and unusual legal measures to ensure the protection of one group of children, yet on the other hand, they allow and affirmatively promote the deaths of even smaller and more defenseless children. All as a result of “redefinition.” Yet, in the words of a thoughtful young student: “The Truth is the most powerful thing in the world, because nothing can stand against it.”

Fr. Walter J. Ciszek, S.J. knew this intimately in his 23 years in the Soviet Union. He came face-to-face with an evil totalitarian regime which used terror and death to effect its public policy and public philosophy. As a victim of this regime, he firsthand suffered personally the effects of the “redefinition of things.” Yet he survived because he knew and clung to the truth and ultimately the truth set him free.

In his spiritual testament He Leadeth Me, published in 1973, Fr. Ciszek spoke about abortion in the Soviet Union; one might be tempted to conjecture that he chose these words carefully, as they might as well refer to the United States:

And how could you explain the larger evils of communism? These people know of the terrors of Stalin’s time; practically everyone in our group had a friend or a relative or at least knew of someone who had been to the slave labor camps of Siberia. Where was the system’s much vaunted “humanity” then? Or abortions. Just take abortions. Here in our little town there were fifty-six abortions daily—just check the official statistics—and what about the rest of the Soviet Union? Is that any way to foster humanity?

Abortion is legal in the Soviet Union. Anyone who wants one can have it performed. The government says it has to be legalized to prevent private abuses. The wages of husband and wife together make it hard to support more than one or two children, so everyone wants an abortion. Yet the question haunts them. The hallways of the clinics adjoining the abortion rooms were full of posters, not praising abortion but informing patients of the possible detrimental effects on both mind and body such an operation could have. The doctors, mostly women, and the nurses and other personnel would try to dissuade patients from the operation. Women confided years later that they could not rid themselves of feelings of guilt about it. And these were not “believers,” but women and girls who had received a complete atheistic education in soviet schools.

Even for communism, it is a basic question of life and death, or wrong and right. If life at its very root can be treated so lightly, people would say, who is going to stop such a mentality from spreading? Society? Hardly. Society cannot even handle properly its present problems of crime and other social disorders. And when a society actually endorses evil, where will it end? Can man alone be trusted to solve mankind’s problems? Look at history, and the depths to which civilized countries have sunk time after time.

Abortion was justified in the Soviet Union “to prevent private abuses” (i.e., back alley abortions) and because children were a financial burden in a tough economy. Does this sound familiar? There is one striking difference, however, in Father’s account of the Soviet Union and the situation in the United States: abortion clinic personnel in the Soviet Union seemed to be honest about the detrimental effects of abortion; in the United States there is no such honesty. “When a society actually endorses evil, where will it end?” Easy: failure, estrangement, terror, and death.

Yet, with life, there is hope. With every newly conceived child the universe is changed forever. That hope will come when a determining number of people in a society acknowledge and defend the truth. Matters of truth first and foremost require a personal decision and commitment. It requires a commitment to the whole truth—even to the point of acknowledging that we cannot solve these problems: “Can man alone be trusted to solve mankind’s problems? “ No. “Place not your trust in princes,” says the Scripture, and rightly so. We ought not look to political leaders or political solutions. We need God. And how do we bring God to society? By first bringing ourselves to Him. Fr. Ciszek, in an interview in May 1984, a mere seven months before he died, told us how to bring ourselves to God: prayer. He said: “I don’t care what format you follow, but if you are sincere and pray you will progress in prayer in a very special way because God reveals himself in faithfulness. If you are faithful in prayer, God will reveal and open [up] much more to you.”

In the final analysis, we may seem powerless against the leviathan that are the forces of our media-driven culture and government, but if we courageously bind ourselves to the truth—especially through prayer, no harm can ultimately befall us. Our children will learn from us and abortion will be seen once again for the crime that it is. Fr. Ciszek can be our guide and model in that task. As this month we prayerfully remember the millions of dead children and wounded parents since 1973 and commend them to God’s mercy, let us also recall with joy that it was that same year that Fr. Ciszek gave us a true guide for finding God in a confused and often evil world, He Leadeth Me. Its message of trust in God is a message of humility, which is nothing other than seeing things as they really are—acknowledging the truth. As Fr. Ciszek says: “A spirituality based on complete trust in God, therefore, is the surest guarantee of peace of soul and freedom of spirit.” And, I would add, the prerequisite to ensuring the sanctity of human life.

This article, Defending the Sanctity of Human Life with Fr. Ciszek is a post from The Bellarmine Forum.
https://bellarmineforum.org/defending-the-sanctity-of-human-life-with-fr-ciszek/
Do not repost the entire article without written permission. Reasonable excerpts may be reposted so long as it is linked to this page.