I am going to be polemical. You are forewarned.

There is a fundamental aspect of the debate over so-called same-sex marriage that needs to be understood: most people in the cities and towns of Minnesota and across the United States are not eager nor clamoring for the legal recognition of two homosexuals to form a union akin to—but which will never be—marriage. Whence does the issue then arise? This is simply part of a larger program of a relatively small group of elites and their fellow travelers (who are generally folks who wish to be admitted to the club—i.e.,media, Hollywood types, etc.) popularly styled the ‘Ruling Class.’ Contrast this with the position of the Catholic Church who stands as a defender of common sense and the common man.

Today’s Ruling Class, from Boston to San Diego, was formed by an educational system that exposed them to the same ideas and gave them remarkably uniform guidance, as well as tastes and habits. These amount to a social canon of judgments about good and evil, complete with secular sacred history, sins…and saints. Using the right words and avoiding the wrong ones when referring to such matters—speaking the “in” language—serves as a badge of identity. (Codevilla, The Ruling Class, p. 10)

In a paradoxical way, this same group which is accustomed to denigrating religious people—especially believing Catholics—are extremely religious themselves. A dogma in their religion is the legal recognition of same-sex marriage and the traditional benefits that accrue to married couples. In a word, the elites who would impose the novelty of same-sex marriage are the same small select crowd who are miles away from the rest of the populace in terms of interests, tastes, everyday living and tradition. Indeed they are miles away from any sort of natural law or traditional Judeo-Christian teaching on the point.

It is interesting to note that the ‘Ruling Class’ is so intent on this dogma that they will ignore the strictures of law and legal processes to effect their will. Two recent and significant examples may illustrate the point. The Department of Justice, by order of the President acting sua sponte, refused to enforce certain provisions of the Defense of Marriage Act (DOMA), a federal law enacted under the Administration of President Bill Clinton. Likewise, there are proposed new regulations from Department of Health and Human Services mandating that Catholic institutions perform or provide services that run contrary to the doctrines of the Church. Never before has there been such an audacious and brazen attempt by people at the levers of power to impose a particular agenda in a way that is of dubious constitutionality and so restrictive of citizens’ ability to enjoy their First Amendment freedoms. What is doubly unfortunate is that most of media are providing cover for the ‘Ruling Class’ and don’t even question this whittling away of our nation’s constitutional system.

However, one group has emerged to challenge the ‘Ruling Class.’ Indeed, it is the Catholic Church. In doing so, not only is she defending the truth of marriage but she has become the defensor civitatis—the defender of the citizenry, defender of the rule of law. Seeing what was on the cultural horizon in the late 1960’s Archbishop John Murphy of Cardiff, Wales stated:

It is the Church which fights for the unborn child, for the rights of parents to educate their children, for the dignity of the marriage contract, for the dignity of the individual being. And in some secular humanistic future, when the only sin will be pain, the only evil ill health; when childbearing will be looked upon as a disease, and terminal illnesses will not be tolerated, when it is just possible that the free, human beings will be forbidden to have a child, or a smoke, or a drink, save by prescription of the National Health; in that cold, clinical future, you will search in vain for the rebels save in the ranks of the Catholic Church. 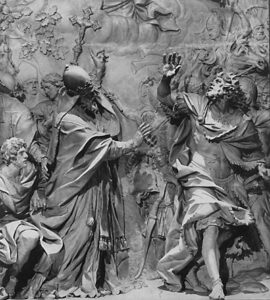 This article, Defensor Civitatis is a post from The Bellarmine Forum.
https://bellarmineforum.org/defensor-civitatis/
Do not repost the entire article without written permission. Reasonable excerpts may be reposted so long as it is linked to this page.