Prudence is a virtue that we all value and desire.  Let us look at this virtue in St. Joseph.

1.  St. Joseph never acted on impulse.  He always reflected before acting.  What husband would not have put away his wife without any delay when he discovered that she was about to give birth to a child that was not his’ Not so St. Joseph.  He waited and pondered and prayed, and gradually formed the prudent resolve of sending her back in secret to her friends.  Even after deciding on this plan as the best, he again waited and commended it to God, turned it over and over in his own mind, prayed still more before proceeding to act.  It was this prudence of his, this charitable delay, that earned for him the solution of his doubts by an angel’s voice.

2.  St. Joseph had entrusted to him the training up of Jesus.  The formation of the character of the divine Child was committed to him.  What prudence, what perfect prudence must he have possessed whom God considered as the fit guardian of the Eternal Word!  If I were more prudent, God would entrust to me greater works to be done for Him.

3.  Our Lady must have had wonderful confidence in the prudence of her spouse when she arose unhesitatingly at dead of night to fly with him to Egypt, just because he told her he had had a dream warning him to do so.  But she knew not only how naturally careful and wise he was, but that he had an infused and supernatural prudence that could not be deceived.  If I were more prudent, others would trust me more, and listen with greater confidence to my advice or commands. 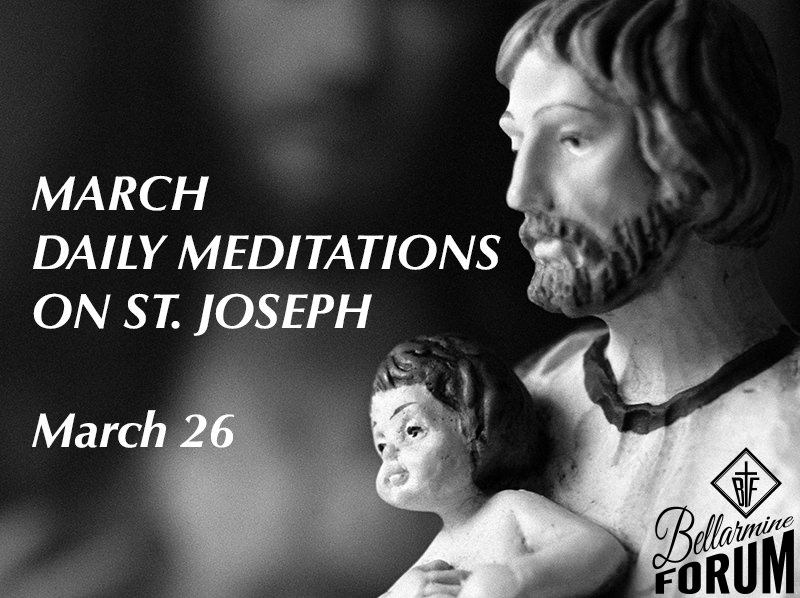 This article, March 26th — St. Joseph’s Prudence. is a post from The Bellarmine Forum.
https://bellarmineforum.org/devotional/the-catholic-daily/march-month-st-joseph/march-26th-st-josephs-prudence/
Do not repost the entire article without written permission. Reasonable excerpts may be reposted so long as it is linked to this page.