31 — The Appearance of Jesus in Galilee.

The Appearance of Jesus in Galilee.

[16] And the eleven disciples went into Galilee, unto the mountain where Jesus had appointed them. [17] And seeing him they adored: but some doubted. [18] And Jesus coming, spoke to them, saying: All power is given to me in heaven and in earth.

1.  Jesus had summoned the apostles by the mouth of the holy women to repair to Galilee, and had promised to meet them there; and in accordance with His promise He appeared to them in the place and at the time that He had appointed.  Why did He make them travel to the mountains far away, when He might just as easily have appeared to them at Jerusalem?  It was to teach them obedience, and to teach us the same.  Our Lord seems to impose arbitrary commands on us, to lead us by strange paths; because it is important before all else that we should be trained in blind obedience and in the renunciation of our own will and judgment, which are so sure to lead us astray.

2.  Some had doubted before when He first appeared, but now one and all believed.  They had learned their lesson at last.  Even the skeptic Thomas was now fully convinced, he had made his act of faith and submission when he cried, “My Lord and my God!” Now as soon as Christ appeared they all adored Him.  Now it was a real joy to them to fall prostrate at His feet and offer Him supreme homage.  So now when the bell rings and He is present on the altar it should be the source of joy to us.

3.  Jesus confirms and rewards their faith by a declaration of His Omnipotence.  To Him as man is given universal dominion.  He is King of kings, and Lord of lords.  He, our Lord and our God, has all power in heaven and earth.  Why then should we fear?  — why do we not trust Him as we ought?

Challoner note to verse [18] All power: See here the warrant and commission of the apostles and their successors, the bishops and pastors of Christ’s church. He received from his Father all power in heaven and in earth: and in virtue of this power, he sends them (even as his Father sent him, St. John 20. 21) to teach and disciple, not one, but all nations; and instruct them in all truths: and that he may assist them effectually in the execution of this commission, he promises to be with them, not for three or four hundred years only, but all days, even to the consummation of the world. How then could the Catholic Church ever go astray; having always with her pastors, as is here promised, Christ himself, who is the way, the truth, and the life. St. John 14. 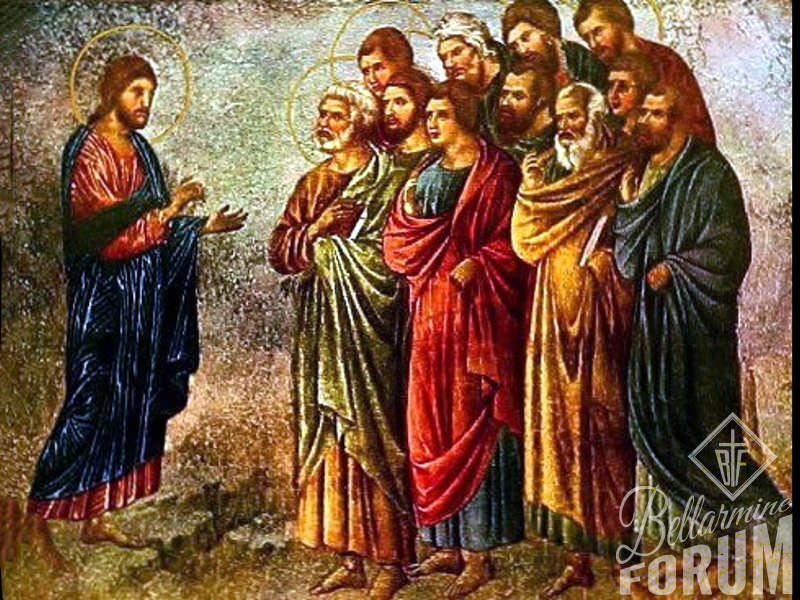 This article, 31 — The Appearance of Jesus in Galilee. is a post from The Bellarmine Forum.
https://bellarmineforum.org/devotional/the-catholic-daily/resurrection-ascension-jesus-christ/31-appearance-jesus-galilee/
Do not repost the entire article without written permission. Reasonable excerpts may be reposted so long as it is linked to this page.