Fr. Ciszek and the North American Martyrs: Reflections on Sinfulness and the Love of God 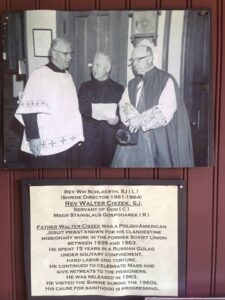 On August 4, 1964, Fr. Ciszek began his annual eight-day retreat in preparation for his final vows, which he would take on the Feast of Our Lady’s Assumption, August 15, 1964. The site for this particular retreat was the Shrine of the North American Martyrs (also known as the Shrine of Our Lady of Martyrs), in Auriesville, New York. It is built on the site of Ossernenon, a small Indian village on the south bank of the Mohawk River. St. Kateri Tekawitha was from this village and it was the inhabitants of this village who ultimately killed St. Isaac Jogues, St. Rene Goupil and their fellow Jesuit companions in the 17th century. The Shrine has long been a spot for prayer and meditation for the faithful across the country.

There is something mystical about the place. When one arrives, he feels the centuries in his bones. Looking across the expanse towards the Mohawk River and seeing the sharp incline below from the height of old village of Ossernenon, one can’t help but feel the need for silence when meditating upon the events of that spot. It was there, down the sharp incline, that the Jesuit saints were forced to “run the gauntlet”—running up and down the hill while being stoned with sharp rocks and lacerated by blades and spears of the savage tribe. Upon that holy spot now lies a circle of rocks—possibly from the same era—now configured into a rosary.

The Jesuits have long cultivated devotion to these holy places, having erected a coliseum-style church in 1930, no doubt reminding the faithful of today that the suffering of the 17th century Jesuit martyrs had a mystical relation to the suffering of the early Christians in Rome’s Flavian Amphitheater.   Not far away from the shrine church is a ravine. As one walks down the ravine, there is an eerie silence. One encounters several small altars, commemorating the area—the exact spot still unknown—where St. Rene Goupil’s body was dismembered and thrown to be consumed by wild animals and the ravages of time. The place and the moment of one’s visit cannot but call forth emotion for the one who irrigated the land with his blood, so that the seed of faith could bloom in North America. 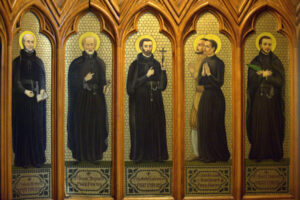 And so it was, in August 1964, that Fr. Walter Ciszek, S.J., fellow Jesuit with the martyrs, came to the place of their tortures and death. Fr. Ciszek had seen his own share of torture and probably knew—more than most—a taste of their sufferings. How close he must have felt to them as he made his retreat! How intimate his relationship with them as he made the same meditations from the Spiritual Exercises that they had made centuries earlier. How humble he must have felt being in the presence of the ground watered by their blood and witness. This whole history and Father’s recent return from his own sufferings in Russia, must have colored his meditations and spiritual insights and inspirations.

Fr. Ciszek’s reflection on his own personal sinfulness, as composed by him during a meditation during this retreat in 1964, should help us today in overcoming our own sinfulness. Let us allow Father to speak to us today, as we continue striving to be the saints that God created us to be:

The Lord did not punish me enough in the camps. Instead, when all was lost and no hope existed, he almost miraculously saved me from perdition. Why? I don’t know, because there is nothing worthwhile I did for him, but rather the opposite. He regarded the good prayers offered for me and the power of these prayers did the miraculous for me.

What am I worth in comparison with all men? Many excel me in natural and spiritual gifts. With angels and with the saints in heaven there is no need of making comparisons. And if compared with God, I am nothing. The most insignificant of creatures who dared to sin against his Creator. Vile, selfish, corrupt, yet sullen enough to live with people, and presumptuous enough to pray to God whom I offended. Sin made me obnoxious, degraded in the eyes of God, a monster that only sin could make. Yet in spite of all this, the Lord regarded my nothingness, preserved me, cared for me, and delivered me from hell itself without my deserving this in the least. Where is God’s justice? Where are his sanctity and other attributes, to condescend so low because of me and lavish his blessings on one so unworthy of them.

Why this for me? Why spare me, when you did not spare others far worthier than I? Confused, abased, humiliated to the depths, Lord, I express my deep gratitude to thee. You have done so much for me, let me do something for thee. Whatever you ask from me, I shall do, however humiliating, difficult, dangerous – or even most ordinary, but requiring hidden sacrifice, immolation, in daily insignificant and unrecognized actions. Or, with all sincerity yet modest and simple humility, if you call for a total sacrifice of life itself, your unworthy servant is ready. There is nothing I will refuse you, if you will it. You have conquered sin, evil, and death itself; that is why you are life and resurrection itself.

*October 19 is the Feast of the North American Martyrs–don’t forget!

This article, Fr. Ciszek and the North American Martyrs: Reflections on Sinfulness and the Love of God is a post from The Bellarmine Forum.
https://bellarmineforum.org/fr-ciszek-and-the-north-american-martyrs-reflections-on-sinfulness-and-the-love-of-god/
Do not repost the entire article without written permission. Reasonable excerpts may be reposted so long as it is linked to this page.