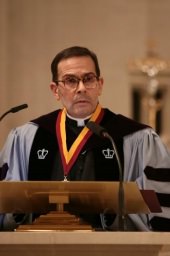 This past week saw the passing of another giant of Catholic education and Catholic legal theory: Fr. Robert J. Araujo, SJ.  To those in Catholic academe or in the realm of law, Fr. Araujo was a professor’s professor and a lawyer’s lawyer.  His credentials and CV read as if he should be placed in the Mt. Olympus of legal scholarship.   Likewise, his practical experience ranged from being an officer in the US Army to government attorney to corporate attorney.  In 1986, he entered the Society of Jesus and subsequently was ordained a priest and served as a professor of law at the Pontifical Gregorian University, Gonzaga University, Boston College, Georgetown University, St. Louis University, Fordham University and Loyola University Chicago.

A true Jesuit and defensor fidei et rationis, Fr. Araujo labored oftentimes among a hostile professoriate and student body.  In his quiet, scholarly manner, however, he sought to engage both student and colleague alike and proposed to them a commonsense view of reality.  He constantly proposed the metaphysical foundations of all reality and the natural law as the true bases of law and he embodied the spirit of Fr. John Courtney Murray, SJ’s observation that the true question of church and state for the American Republic is “not whether the Catholic Church is compatible with the America, but rather whether America is compatible with the Catholic Church.”

His conviction of the claims of Christ and His Church found him defending not only the Church, but also the nature of the Society of Jesus as Ignatius himself had founded it.  In response to an article by Autumn Jones in The Atlantic on the nature of Catholic and Jesuit universities, Father’s summary–much to the consternation of the more accomodationist (dare I say, Modernist) elements in the Society–is something you might find in reading Bellarmine.  It is clear, concise, logical, and faithful:

Truth in advertising is vital to the authenticity of the claim that a school is Jesuit. If I may borrow from the Formula of the Institute, whosoever desires to serve as a Jesuit institution should keep what follows in mind: that the Jesuit order was founded for this purpose, which is “to strive especially for the defense and propagation of the faith and for the progress of souls in Christian life and doctrine.” I fear that in today’s climate many students, faculty, and administrators who believe they are a part of Jesuit education would find it difficult to endorse this essence of what it means to be Jesuit….

For those who believe that Christ is the Lord and Savior of the human person, let us not be afraid to follow Him rather than the sirens of the present age who think and claim that they are a part of the enterprise molded by Ignatius but, in fact, are not. Christ engaged the world for the particular objective of human salvation, and this purpose became that of Ignatius of Loyola. May this end be unambiguously reflected in the lives and work of those who follow the Son day after day on the campuses that claim to be Jesuit and Catholic. This work is not one of imposing but of proposing the objective for which the Jesuit order was established.

Fr. Araujo was a man of many talents, but to him his highest calling and defining work was to be a priest.  He gave retreats, offered Masses, heard confessions, and was kind to all he met.  He even made time for a mediocre lawyer and his family.  Others may offer encomia on his professional accomplishments and his academic accolades, but one personal kindness he offered to my children is worthy of mention here.  During his long and painful final illness, he built model ships to keep his hands deft and his mind sharp.  One of these ships was the USS Olympia, a cruiser that saw action in the Spanish-American War in 1898.  The detail is tremendous and it is a thing of great beauty and enchantment.  Just before he left Chicago for the Campion Center in Massachusetts, the final Jesuit house in which he would reside, he bequeathed the Olympia to my children.  Subsequent to my picking up the ship, we would occasionally correspond and chat–with him always asking “whether the Olympia was sailing in fair waters.”  Indeed, it was and is and it is a continuous source of awe and wonder to the little kids in the house.  In the end, perhaps that is the job of a priest, to inspire awe and wonder in God’s children–not only to beautiful things but to Beauty Himself.  This, Father Araujo did.

May you sail towards the shores of the blessed, Father.  Requiescas in pace. 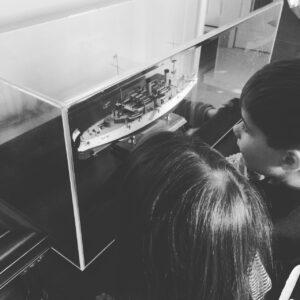 This article, Fr. Robert J. Araujo, SJ (1948-2015) is a post from The Bellarmine Forum.
https://bellarmineforum.org/fr-robert-j-araujo-sj-1948-2015/
Do not repost the entire article without written permission. Reasonable excerpts may be reposted so long as it is linked to this page.