I first met Francis Cardinal George shortly after his elevation to Cardinal, probably sometime in early 1998. I met him through Fr. Leo Sweeney, S.J., a friend, teacher and long time philosophy professor at Loyola University Chicago. I can’t recall why His Eminence was at Loyola; perhaps it was a commencement, perhaps he was giving a lecture. In any event, he was in his ecclesiastical finery and repaired to the old Jesuit Residence (the “JR”) for a lunch with the older Fathers after the festivities. I was working the JR’s porter’s office at the time as a part-time job on weekends for some extra dough. Fr. Sweeney was one of those “older Fathers” and he came to fetch me after the lunch to meet the Cardinal.

The older Jesuit and the Cardinal had known each other previously. It seems the two were both philosophy professors at Creighton University at the same time in the 1970s. It was a rough time for philosophy at Catholic universities and a rough time for the faith in general. Land o’ Lakes was still fresh and many academics thought that the university could remain Catholic and yet “autonomous” from any ecclesial authority. At that time, Fr. Sweeney authored a position-paper at Creighton critiquing the diminution of the philosophical offerings–especially the study of Aquinas–and the squandering by his fellow Jesuits of their intellectual and spiritual inheritance. It certainly did not win friends and influence people and Fr. Sweeney was quickly moved to the Catholic University of America to be a Visiting Professor of Philosophy in 1972. After about a year at Catholic University, he took up his post at Loyola University Chicago where he remained until his death in 2001.

I recall that Fr. Sweeney greeted the appointment of Francis George as Archbishop of Chicago with great enthusiasm. No doubt the former had followed George’s intellectual work and ecclesiastical career and saw in him the right man to lead the Church in Chicago. I found the whole scenario to be surreal as Fr. Sweeney, elderly Thomist that he was, very relaxedly and nonchalantly led me to the dining room and introduced me to His Eminence. Cardinal George, dressed in his ecclesiastical finery complete with cape, stood up and offered me a very gracious greeting. Of course, I was nervous meeting a Prince of the Church. We chatted for a few moments with a few of the older Fathers. I was struck by his kindness and graciousness–for who was I? I was also struck by Fr. Sweeney’s friendliness and frankness to His Eminence. Being 20 years his senior, Fr. Sweeney was one of the older of Cardinal George’s priestly sons in the Chicago of the late 1990s. It was one of those moments where an old priest who has fought the battles, meets his younger and lawful superior; he maintains his obedience and respect while, at the same time, is not impressed with the rank. No “respecter of persons” (as the moralists might say) was Fr. Sweeney. Yet, there was a profound esteem and love for this Archbishop. What was also apparent to me, in this brief exchange, was the same posture towards the older priests by the Cardinal.

Years later, when Fr. Sweeney lay dying at St. Joseph’s Hospital on the north side. His Eminence personally called him to offer his prayers and comfort. This was a not infrequent gesture from this beloved Archbishop. The personal touch, the personal interest in each individual–even to his theological or political opponents–seemed to be a hallmark of Cardinal George. Dr. Dennis Martin, theology professor at Loyola and a friend of Cardinal George, remarked to me once that the Cardinal’s solicitude for the professoriate–even those who sought to undercut his authority–was profound. His approach was disarming to these hostile individuals and, while outside observers might have been critical of his not “taking a harder line,”  he seems to have had just the right touch. Some hearts were softened; perhaps, some hearts were brought to Christ. In this he embodied what Blessed Paul VI observed: “Contemporary man listens more willingly to witnesses than to teachers, or if he listens to teachers, he does so because they are witnesses.”

Cardinal George was, no doubt, among the hierarchy the intellectual horsepower of the Church in the United States. His thoughtfulness and the profundity of his example was  a model for many and served to inspire many of my generation who strive to be authentic Catholic intellectuals. He saw the life of the mind as a way of reaching God and for him it was an act of profound charity to lead others to God through this life of the mind. Cardinal George has been dubbed “the American Ratzinger” and not unreasonably. He shared the same gift as Benedict XVI in clarity of thought and expression to both the lettered and unlettered. He could plumb the philosophical and theological depths of an article of the creed or the nature of law with intellectuals at the Lumen Christi Institute as easily as he could speak to a little girl about Jesus over a hot dog and lemonade at a backyard cookout. 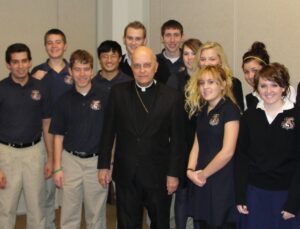 Several years ago, I was again the beneficiary of the Cardinal’s kindness. This time it was his generosity in meeting with about 11 high school seniors from St. Agnes School in St. Paul to discuss the intellectual life. In what was originally scheduled as a 10 minute audience (not unusual given his tremendously busy schedule), he gave our students 40 minutes. He fielded questions and even began speaking of the problem of evil–the mysterium iniquitatis, as he called it–that the students had considered in reading Augustine. He then extemporaneously spoke of the Church in the modern world and the challenges that the new generation of Catholics would face. He was blunt with the students; he pulled no punches. He called evil for what it was and corruption for what it was, but he also was confident that we are on the winning side. The Cardinal was truly interested in our students and offered me and my colleagues the same hospitality and kindness that he did 15 years earlier. Truly it was an honor.

Much will be said about the Cardinal in the coming days, but the words of his longtime executive assistant Mary Hallan FioRito serve as a proper encomium of this man’s great life:

[I]n the past 17 ½ years, the Cardinal has truly shown himself a neighbor, offering help in times of need, advice when asked, a friendly smile when greeting you, an encouraging word if you appeared down. At his final Mass at Holy Name Cathedral […] Francis our Archbishop, our pastor, and yes, our neighbor, remarked that many have asked him what his legacy here would be. He noted in his homily that God has given us, the people of the Archdiocese, to him as a gift and he in turn has tried – like the good and faithful servants in last Sunday’s Gospel – to use those gifts wisely, to teach us, to help us to be holier, more generous, and more responsive to the Lord’s call in each of our lives. “YOU are my legacy,” he concluded.

May each of us live up to it. Thank you, Cardinal George, good and faithful servant.

This article, Francis Cardinal George, Teacher and Witness (1937-2015) is a post from The Bellarmine Forum.
https://bellarmineforum.org/francis-cardinal-george-teacher-and-witness-1937-2015-2/
Do not repost the entire article without written permission. Reasonable excerpts may be reposted so long as it is linked to this page.