Jesus I Trust in You

Feast of the Divine Mercy

This Sunday we will celebrate Divine Mercy Sunday. Many are familiar with the image of the Divine Mercy. It was revealed to a humble Polish nun, St. Faustina Kowalska, in 1931 in a vision she had of Christ. The image is of the Risen Lord, whose pierced side flows water and blood, which represents baptism and the Eucharist, which symbolically represents the Church. The image also recalls Adam, out of whose side a rib was taken and God created Eve, his bride. At the bottom of the image are the words “Jesus, I Trust in You”. Along with the image, is the chaplet. These are prayers mediated upon using a rosary.

Jesus I trust in you.

Trusting in Christ is probably the hardest part the spiritual life. Why? Because our struggle is to unite our will to God’s will and 9 times out of 10 we are in conflict. Often times, what we want for ourselves is not what God wants for us. We seem to forget the fact that God is God and we are not. God is the vine, we are only branches. God created the universe, and we are grain of sand. So, guess who has a clue and who doesn’t?

However, it is important to remember that even Christ himself struggled with the Divine will in his agony in the garden.

“Father, if you are willing, take this cup away from me; still, not my will but yours be done” Luke 22:42 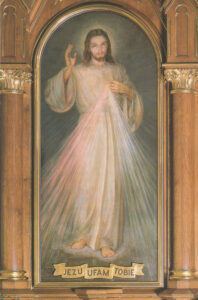 A year ago, on Divine Mercy Sunday, I was in Rome for the canonization of St. John Paul II, who canonized St. Faustina Kowalska. It is St. John Paul II who really brought the image of the Divine Mercy to the world and enhanced devotion to it. So, it was fitting that his own canonization ceremony would take place on this feast. During my visit, I had an opportunity to visit the Basilica of Santa Croce in Gerusalemme. This church holds some of the relics of the Holy Cross. It also has a true to size replica of the Shroud of Turin. As I stood in the church, I stared at the replica of the Shroud for quite a while. The reality of the crucifixion shocked me and made me acutely aware that Mel Gibson’s cinematic representation of the Passion was true to form. It was a horrific and cruel death. It reminded me of what St. Paul said “You were bought a price” (1 Cor 7:23). It was a high price indeed.

For the sake of his sorrowful passion, have mercy on us and on the whole world.

Recently, I was speaking with my sister (who is a nun) about my difficulty at times to trust God and in His Mercy. In a roundabout way, the conversation led to a discussion about the encounter Jesus had with the Samaritan woman (Jn 4:4-42). The story of the Samaritan woman (or the Woman at the Well) has always intrigued me. Jesus spends most the Gospels proving He is the Messiah through works and miracles. And yet he doesn’t come right out and say “I am He”. He does get into a painful conversation with the Pharisees, culminating to a point where He blurts out to them “The Father and I are one.” They, in turn, respond by attempting to kill him by picking up stones. And yet, after a simple, honest conversation with the sinful woman, Jesus reveals himself to be the Messiah with such apparent ease.

Now, I have heard many interpretations of this encounter, none of which made sense to me because they seem to go to extremes. One interpretation I heard said that the woman was possessed by demons. I find this odd considering the fact that Gospels are chock full of example of Jesus driving out demons, but it is not mention in this story. Another I heard tries to excuse her behavior by saying that the woman’s husbands are really a real life example of the conversation that Jesus has with the Sadducees about the resurrection (Mk 12:1-27). The Sadducees did not believe in the resurrection of the dead and decided to question Jesus about it using an example of a woman who marries one brother, and he dies. Then she marries another, and he dies. The poor woman manages to marry the entire clan apparently. So the question is asked of Jesus is “at the resurrection, whose husband will she be?” Uh, none. But this interpretation makes no sense because Jesus says to the Samaritan woman “And the one you have now is not your husband”.

However, sometimes it is best to take things at face value. What is apparent in the story is that the woman is a sinner. Her sin is so scandalous that she goes to collect water at Jacob’s well in the heat of the day so she will not be seen. She is trying to avoid the snickers and sneers of the townspeople. As she reaches the well, she encounters Christ. He asks her for a drink. He thirsts. She is shocked and somewhat amused that he is asking her this, since she is a Samaritan and Jews did not share any vessel in common with Samaritans because they were deemed impure. Christ then says to her “If you knew who was asking you ‘Give me a drink’, you would have asked him and he would have given you living water”. The living water is a share in His divine life. As the conversation progresses, she asks him to give her this “living water”. Then comes the moment of truth – and this moment is crucial because he later tells her that we must worship God “in spirit and truth”. It is interesting how he approaches this with her. There is no condemnation or castigation. Jesus simply asks her a question. In this question, he shows her the condition of her soul and at the same time, his mercy. St. Thomas Aquinas once said “Whatever is received is received according to the mode of the receiver”. In this moment of truth, she receives his mercy with joy and what she does next is amazing. She drops her bucket and immediately runs off to the very townspeople she has been avoiding to tell them the good news. She is no longer afraid or ashamed. She is free. The story ends with the townspeople experiencing Christ’s mercy for themselves, as they say to the woman “We no longer believe because of your word; for we have seen for ourselves, and we know that this is truly the savior of the world”. Once we receive the mercy of Christ, we should share our experience and joy with others.

No one knows what became of the Samaritan woman. We know her experience of Christ’s mercy had a profound effect on her. We can assume that her experience led her to change. It may not be the change she wanted, but it is the change she needed. And therein lies the trust. To change, we must trust in Jesus – trust that the new path he has set out for us is for our own good, no matter where it leads.

St. Therese of Lisieux once said “Trust and trust alone should lead us to love”. Trust is a very childlike thing. But as Jesus said:

“Whoever does not accept the kingdom of God like a child, will not enter it” Mk 10:15

This article, Jesus I Trust in You is a post from The Bellarmine Forum.
https://bellarmineforum.org/jesus-i-trust-in-you/
Do not repost the entire article without written permission. Reasonable excerpts may be reposted so long as it is linked to this page.