Kerygma for a Magdalen Ministry

About 20 years ago a friend of mine wrote a satire of modern ecclesial life in which he parodied the Bishops of the United States in a classic inversion of priorities in which the High Holy Day of Easter took second place to a  “Magdalen Ministry”–some sort of outreach where women’s contributions could be celebrated through song, story, or dance or something to that effect. The reason the parody was so successful and so funny is because it is, unfortunately, so true to ecclesial priorities in this country. Focus on our Blessed Lord seems to be secondary to the reigning orthodoxy of women’s rights and other sundry causes du jour.

No one is more at the forefront of crafting an “acceptable Catholicism” than Fr. James Martin, S.J. Fr. Martin is the editor-at-large of America Magazine, a flagship publication of the American Jesuits and also the–perhaps, unofficial–chaplain of comedian Steven Colbert. Indeed, Fr. Martin is a prolific writer and–it must not be denied–an influential shaper of public opinion on the Church in this country. That said (from the point of view of this observer) his is a disappointing and less than courageous Catholicism that seeks rather to find acceptance among the cultural elite than to call them to a higher standard–the Standard of Christ. Perhaps this is the especial malady of the star-struck ecclesiastic. There is a certain psychological love of the attention and being accepted that the (perhaps, initial) fervor to transform the culture gives way to a comfortable co-existence. (A similar thing happens to the freshman Congressman when he comes to transform the Washington culture, only to find himself comfortably entering the “hot tub of D.C.” and conveniently forgetting the initial principles that animated his entrance into public life.) Perhaps it is a sense of friendly-relations and good manners that prohibits one from calling out his peers when something completely contrary to Christ and His Church is uttered. I wish to make clear here that I presume not to judge Father’s soul or the efficacy of his presumably private discussions with and admonitions to his friends in the media, academe, and entertainment in their journey to live the life of the Gospel.

That said, it is curious how Fr. Martin seems to frequently utter platitudes which, at best, are an effort to give spiritual comfort upon a profound reflection of the Gospel; and, at worst, are the sublimation of the tradition of the Church and sound theology to an agenda that is of this world–cultivating and winning converts for The Church of Where It’s At. Unfortunately, The Church of Where It’s At is not the Catholic Church of which Fr. Martin is a priest. Consider the following Tweet:

This statement is so rife with error it is hard to know where to begin. I suppose it may be said to be the “Kerygma of a Magdalene Ministry” (as my friend satirically said 20 years ago!). The statement may be satisfying to feminists in theology department faculty lounges or supposedly-aggrevied women who would like to see the declarations of Paul VI and John Paul II on the ordination of women overturned, but it displays a very impoverished view of the Church–for where is the Blessed Mother (according to Ignatius, she would have been the first person Our Lord visited after His Resurrection)? or the just souls and ancient Prophets and Fathers of the Old Testament? Are they not members of Christ’s Church (certainly the Early Church Fathers have always held such)?

Whether Father knows it or not, his statement belies a preoccupation with a this-worldly church and not the supernatural society that is the Mystical Body of Christ. I suspect that Fr. Martin is attempting to follow the lead of Pope Francis to “go to the margins” and perhaps seek the lost sheep of those women who seem to have been hurt by the Church. Recognizing that the first persons on earth to know of the Resurrection were women is a profound point that shows our Blessed Lord’s love and tender care. It also shows the strength of those faithful women who did not abandon Our Blessed Lord when most of the men did. Fr. Martin could have made this point. Instead, his extrapolation that St. Mary Magdalene was “the Church” for a period of time ignores the reality of the Church and furthers a false ecclesiology and agenda-driven theology. Indeed, unwittingly or not, instead of building up the Mystical Body of Christ, Fr. Martin finds himself constructing an edifice of a this-worldly reality which cannot help but turn into nothing other than an NGO. Something Pope Francis warned about in the first days of his Pontificate and something Ignatius would have abhorred.

UPDATE:  Perhaps I ought to reprint a key passage of the Second Vatican Council for Fr. Martin and anyone else studying theology at Weston or Berekely:

The Head of this Body is Christ. He is the image of the invisible God and in Him all things came into being. He is before all creatures and in Him all things hold together. He is the head of the Body which is the Church. He is the beginning, the firstborn from the dead, that in all things He might have the first place.(60) By the greatness of His power He rules the things in heaven and the things on earth, and with His all-surpassing perfection and way of acting He fills the whole body with the riches of His glory.–Lumen Gentium 7

Mary Magdalen again, great as she is, was not “the Church.” 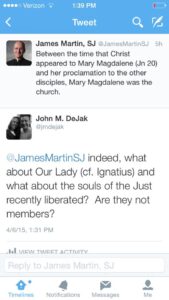 This article, Kerygma for a Magdalen Ministry is a post from The Bellarmine Forum.
https://bellarmineforum.org/kerygma-for-a-magdalen-ministry/
Do not repost the entire article without written permission. Reasonable excerpts may be reposted so long as it is linked to this page.