French March for Marriage, they may yet be Romantics 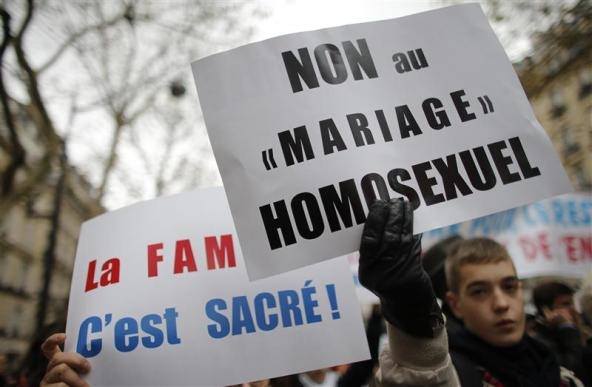 News today from France about Catholics and “others” marching to protest a French bill that would make marriage be defined to include unions between same sex persons spurs some hope in the French.

Recently, I wrote about a Russian cultural center to be built in Paris being denied a permit to build. I see some cultural irony to it, but I wanted to note a link in that article references that the “others” France news failed to identify are Moslems. The Reuters news article, identifies them as Catholics, Moslems, Protestants, and Jews but only mentions “Catholics” in the headline.

It isn’t merely a Catholic issue, however. We’ve covered the topic here in the past.

France is romanticized to be the land of romance, the fruit of which is children. Obviously, for there to be romance, the romantics must be capable of making children. So, any definition of marriage that fails to acknowledge this is, well, unromantic. In this sense, whatever else the French government is trying to do, they seem to be defining the romance out of France. That… That’s just not French.

The sheer determination to be “not French” is perhaps why I applauded the Russian cultural center.

May God speed their efforts to preserve France.

This article, French March for Marriage, they may yet be Romantics is a post from The Bellarmine Forum.
https://bellarmineforum.org/french-march-for-marriage-they-may-yet-be-romantics/
Do not repost the entire article without written permission. Reasonable excerpts may be reposted so long as it is linked to this page.