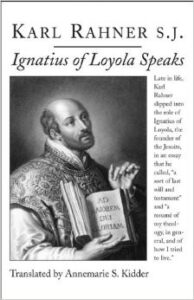 Simply looking at the cover of Ignatius of Loyola Speaks instantly sets the stage for the work. It gives the context of the work, quotes from Karl Rahner late in life saying it is “a sort of last will and testament” and “a resume of my theology, in general, and of how I tried to live,” juxtaposed with the Holl engraving of Ignatius of Loyola. The work certainly bears this assessment out. Ignatius of Loyola Speaks is not a theological treatise, at least in the sense one would be used to from Rahner. It is the hypothetical speech of Ignatius of Loyola to a Jesuit of 1978, a clearer explication of Rahner’s view of his theological endeavor. The first thing that is striking is that although this is written from the standpoint of St. Ignatius, there is very little of the actual St. Ignatius present. The anachronisms of the work are striking, not in having Ignatius of Loyola discuss modern issues, but in his thoroughly Rahnerian interpretation of theology, mysticism, ecclesiology, and Ignatian spirituality. Rahner’s Ignatius is focused on the “socio-critical relevance” of the Gospel and sees no common denominator in the different ways of following Christ. For all of Rahner’s focus on the concrete, historical Jesus, there is little of the historical St. Ignatius in this work.

The essay begins with a discussion on encountering God in the mystical experience and the practice of St. Ignatius’ unique spirituality before diving into an extended discussion of God and his revelation in Jesus. He moves to the nature of the Church and obedience in an ecclesial context, before finally giving his views on Jesuit theology and his anticipation of the future. The strongest section of the work, by far, is the section on Jesus and proper devotion to him, which makes sense both of Rahner’s theology and St. Ignatius’ deep devotion to Jesus’ holy name. Here, Rahner makes a strong argument for St. Ignatius’ “medieval piety,” arguing that modernized piety stands to gain much from the medieval devotions to Christ. This could stand alone as its own work and is striking in its depth; it makes clear the deep personal devotion Rahner has to Christ and the way he truly stands in the Jesuit tradition.

If one is interested in how to interpret Rahner’s prolific body of work, this essay provides clear keys for understanding him better and one is left to wonder whether he couldn’t have written more clearly all the time. His view of grace is easily related as he uses an extended irrigation metaphor to describe how grace touches people. He argues for a deep well of grace contained in the soul of all people, a place where a grace deeper than the grace of any other external reality can “bubble up.” All “external” graces, including the sacraments, simply cooperate with this deep internal grace and work in the soul.

The Church he envisions is a body whose first focus is to help souls. Without this focus, he says, “All love for the official Church would be idol worship, participation in the horrible egotism of a system concerned only with itself…” Throughout the work, Rahner contrasts the official, authoritative, institutionalized Church with the church of spirit, and attempts to set his Ignatius against the Saint. Rahner’s Ignatius suggests a disobedience to the official Church which underscores a true loyalty to the church of spirit, in direct opposition to St. Ignatius’ Letter of Obedience, which Rahner refers to as “silly words”. This dichotomy between the institutional Church and the leading of the Holy Spirit is truly an image of Rahner’s theological system, pitting the external against the internal, the outside with the interior.

Rahner’s ultimate point is to draw Ignatius and the Jesuits of his time into his modern theological framework. He doesn’t hint at this, but makes it explicit when he calls them “humanists with a modern way of thinking” who are headed to a “theological anthropology” that is necessary to a universal Church. The Jesuits of the 17th and 18th century are lauded for their “innovative courage” while the institutional Church is chided for her “orthodox caution.” By the end of the essay, Rahner is not at all concerned with describing an historical view of the Jesuits, but has truly molded them into the modern image of the theologian as he saw it.

If there was any question on Rahner’s theological leanings, any debate on the extent to which he is in continuity with the Catholic tradition, this work soundly puts it to rest. Rahner is concerned with theological anthropology which seeks to free the church of the spirit from the harshly hierarchical Church which seeks to constrain the work of the Holy Spirit in the world. For Rahner, the future of the Church is found in embracing the theological innovations of the day, in disobedience and criticism which breaks down the idolatry towards the institutional Church. His position is the embodiment of Benedict XVI’s hermeneutic of discontinuity.

It is incredibly tempting to see this work as the ultimate form of narcissism, taking one’s ideology and theology, and placing these foreign concepts into the mouth of the saint and founder of the Jesuit order. Upon stepping back from the style of the essay, the work gives an insight into the thoughts and struggles of one of the most prominent theologians of the past century. While Rahner’s ideas are certainly a break from the Tradition of the Church, it seems this work is an attempt at trying to ground his thought in the Jesuit tradition. He writes as St. Ignatius as a final try at working his system into the depth of the Tradition of the Church, regardless of whether the connection actually exists.

This article, Ignatius Speaks? is a post from The Bellarmine Forum.
https://bellarmineforum.org/ignatius-speaks/
Do not repost the entire article without written permission. Reasonable excerpts may be reposted so long as it is linked to this page.