Just War is An Act of Charity

I recently had a brief exchange with a friend over the Obama Administration’s posture towards Syria and the recent words of Pope Francis at his Sunday Angelus where he echoed the words of his predecessor Pope Paul VI, “War never again!”  My friend who is an astute and brilliant attorney, was dissatisfied with the pope’s choice of words, citing the very rich just war tradition of the Church.  All in all, it was a very good exchange.  It was this exchange that occasions this article.  We shall briefly consider two questions:  what is the teaching of the Church with regard to war? and, can a Catholic support a decision for President Obama’s proposed course of action which, according to reports, is a limited military strike?

A continual criticism of Pope Francis is that his “off the cuff” style is not appropriate for a pope whose words must be measured for theological accuracy and propriety. The deconstruction of the pope’s every word is neither helpful, nor advisable.  What is helpful to understand the Holy Father’s comments, is to first look at the context of his statement and situate it in the rich tradition of the Church’s teaching of which he is the guardian.  The pope, like Paul VI before him, knows his theology.  He is also aware of his moral influence in the world and the import of his public statements.  When he utters “war never again,” he is uttering an aspiration.  Is he making a doctrinal statement that war is, per se, evil?  I don’t know how he could, given the Church’s teaching.  Is he decrying the evils that result from war?  Most certainly.  The popes of recent years, beginning with Benedict XV, have condemned war—not per se—but the tremendous suffering and death that is brought about by the technological terrors of the modern age.  Therefore, the pope has done nothing remarkable with his comments and should echo an aspiration of every reasonable and sane human person.

The just war tradition stretches back to St. Augustine who was the first to articulate well the criteria one must employ in deciding on such a course of action.  Indeed, the purpose of a just war is to restore peace, which may simply be defined, not as the absence of war or conflict, but rather tranquillitas ordinis (“the tranquility of order”).  St. Thomas Aquinas in the Summa theologiae, situates his discussion of war under the rubric of the virtue of charity (cf. Summa theologiae, II-II, 40 art. 1).  Indeed, a just war should be an act of charity.  This is a fundamental understanding to grasp if one is to have any coherent understanding of the conditions that justify war or its execution.  Consonant with the 5th Commandment and following St. Thomas, since we know that a just war is an act of charity, the very nature of the act must not be intrinsically evil.  Unlike the intentional killing of the innocent—which is always and everywhere to be condemned without question and admitting of no exceptions, there are times where war may be waged or should be waged.  Given the fact that innocents may be victims in war and tremendous suffering may occur, Aquinas, drawing upon Augustine, develops a twofold criteria to determine (1) whether one may go to war (ius ad bellum) and (2) what one’s conduct ought to be within that war (ius in bello).

The ius ad bellum criteria are the necessary and defining elements that justify the use of force.  If these elements are not fulfilled, one doesn’t even reach to the second inquiry, the ius in bello criteria.  In short there are three elements to ius ad bellum:  (a) a just cause, (b) decided by the legitimate and proper authority and (3) that authority’s right intention.  Does the proposed actions of the Obama Administration pass muster on these points?  We shall examine this below.

Should the ius ad bellum  criteria be fulfilled, the legitimate authority may rightly decide to wage war against the enemy.  This decision for war then triggers the ius in bello criteria.  The elements here are: (a) discrimination between combatants and non-combatants, (b) proportionality (i.e., that the weapons and tactics used are narrowly tailored to achieve the end of victory).  Based upon the experience of the Second World War, the Second Vatican Council elaborated upon the proportionality element of the ius in bello criteria: “Every act of war directed to the indiscriminate destruction of whole cities or vast areas with their inhabitants is a crime against God and man, which merits firm and unequivocal condemnation” (Gaudium et spes, 80).

Before turning to an analysis of these principles to the Obama Administration, we should bring up several other key points.  The determination of whether or not to go to war (ius ad bellum) is essentially an exercise of the virtue of prudence.  St. Robert Bellarmine reminds us in his de Laicis, that such decisions by the legitimate authority are to be given the benefit of the doubt.  Likewise, we as citizens know that there is information of a sensitive nature possessed by our military and others that we are not privy to, nor ought we be.  This “benefit of the doubt” is not a blank check, however, and every Christian is bound in conscience to obey the laws of God, rather than men when the two come into conflict.  Finally, the decision to go to war, because of the suffering and destruction inflicted, must be a last resort.

What of the right intention element?  Giving the President the benefit of the doubt, it seems that he wishes to alleviate suffering of those under an oppressive Syrian regime.  In a statement to the media today, the Presdient said:  “The moral thing to do is not to stand by and do nothing….I do have to ask people if in fact you’re outraged by the slaughter of innocent people, what are you doing about it?”  We should commend the President for his solicitude and his desire to end the murder of innocents.  However, one is lead to ask a tough question of the President and his policy: why are the slaughter of innocents in Syria something that requires the intervention of the United States military and not the slaughter of innocents in other parts of the world; or even the territories of the United States furthered by his domestic policies on abortion and contraception and unwavering support for Planned Parenthood?  At the very least, there is an intellectual contradiction within the mind of the President that should cause one to question seriously whether his view of reality is coherent.

The most difficult element to analyze in the current situation is whether there is a just cause.  The protection of the innocent is a just cause when examined theoretically.  Yet, it is presumed that the legitimate authority considering war has care of a country that has something more than a tenuous nexus to the conflict.  Has the complete situation in Syria been fully examined?  Is Assad waging war against murderous elements in his own country and protecting his people from unjust rogue elements? Given the situation in Syria—a bloody civil war—what is the strategic interest for the United States? Our citizens do not seem to be threatened, our interests are not threatened and our allies do not seem to be imminently threatened.  The President candidly admitted:  “We may not be directly imminently threatened by what’s taking place in a Kosovo or a Syria or a Rawanda in the short-term but our long-term national security will be impacted in a profound way and our humanity’s impacted in a profound way.”  Couple this with the reticence, several days ago, of our top generals in being able to articulate what our interest would be in attacking Syria and warning of a prolonged conflict.

The past has shown us that our intelligence agencies have not always been the most accurate in understanding middle-eastern cultures and conflicts.  Again, what is the cause that would justify war?  A vague notion of “humanity?”  In addition, in a rather disturbing twist, we would be aiding para-military and radical jihadist elements that attacked our own country not too long ago.  By this course of action, is the President suggesting or providing a precedent with which to intervene in any country’s civil war or skirmishes across the globe—whether or not involving US interests?  Is it advisable or prudent to further entrench the United States in an area of the world where we have been less than welcomed?

The foregoing analysis raises more questions than it provides answers.  With no real United States interest in Syria, with vague notions of “humanity,” with an inconsistent Administration in its views of innocent human life, and with deep divisions among other nations’ postures towards Syria, it seems that the ius ad bellum criteria have not been fulfilled as to the justness of the cause for war.  Thus, we need not even address the ius in bello criteria.  Which brings us to the central question:  Can a Catholic support the decision to engage military action in Syria?  Under the forgoing analysis where the just cause element is, at best, not clear, and, at worst, not present, the answer is ‘no.’

On a more personal and speculative level (which is admittedly dangerous), given the incoherence of the Administration’s intellectual positions reagarding human life and given the history of its rather strong-arm approach to both enforcement and non-enforcement of the nation’s laws based upon political criteria, the United States’s posture towards Syria seems rather to be more superbia vitae and libido dominandi than caritas.

Unfortunately (and devastatingly), Augustine says this is the cause of war, not its remedy. 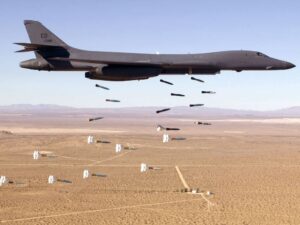 This article, Just War is An Act of Charity is a post from The Bellarmine Forum.
https://bellarmineforum.org/just-war-is-an-act-of-charity/
Do not repost the entire article without written permission. Reasonable excerpts may be reposted so long as it is linked to this page.