Bishop Robert Lynch, ordinary for the Diocese of St. Petersburg, writes the blog titled For His Friends. On August 7, he posted “Hurricane Heading towards Africa,” an article in which he excoriates the Population Research Institute (PRI) for revealing that several African bishops have complained about the work of Catholic Relief Services.

In fact, Bishop Lynch is so infuriated by PRI’s exposé of Catholic Relief Services – on whose board he served for twelve years, half that time as president and chair – that he dismisses PRI as an “allegedly pro-life group,” not “really pro-life but merely anti-abortion.” He elaborates: “Many priests,” – and, we presume, Bishop Lynch is among them – “grow weary of continual calls to action for legislative support for abortion and contraception related issues but nothing for immigration reform, food aid, and capital punishment.” PRI’s lonesome years of opposition to the abortion and contraceptive policies of the United Nations are, therefore, only “alleged pro-life work.” If PRI had come to the defense of a schizophrenic Florida man on death row, however, it would have some credibility in his eyes.

Is Bishop Lynch justified in his evaluation? Is Catholic Relief Services above reproach? Are “anti-abortion” groups such as the Population Research Institute only “allegedly” pro-life? Are the on-going complaints that “anti-abortion” people have raised about a number of other fund-raising projects coming from the United States Conference of Catholic Bishops – such as the Catholic Campaign for Human Development and Catholic Charities – valid? What is pro-life work, after all?

These are complex but important questions. Obviously, the original mission of Catholic Relief Services – that included disaster relief, human development through programs of microfinance, food maintenance, pre-natal medicine and HIV/AIDS interventions, and programs of maternal, pre-natal, and child health care – was “pro-life” work. It’s unlikely that anyone at PRI would disagree. 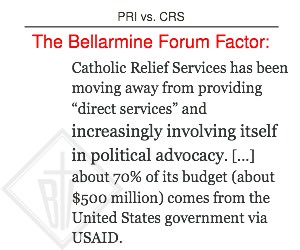 In other words, Catholic Relief Services has been moving away from providing “direct services” and increasingly involving itself in political advocacy. This shift is particularly alarming when one realizes that about 70% of its budget (about $500 million) comes from the United States government via USAID. Despite continuing to call itself “Catholic,” the Population Research Institute (2) argues that Catholic Relief Services “qualifies for government grants precisely because it is viewed by the U.S. government as a legally separate, non-profit, non-governmental organization. Were this not the case, the Obama administration would be more than happy to invoke the separation of church and state clause of the U.S. Constitution and deny it federal grants.”

Bishop Lynch admits this, albeit obliquely. He writes that third world beneficiaries of Catholic Relief Services have “often complained about the demands of reporting required by the government of the United States if federal program monies were involved and I would quickly respond, we don’t like it either but it is the cost of doing business.”

Does working with such a large amount of government money effect which sorts of public policy are advocated in the name of “justice?” Of course, it does. It’s another one of the “costs of doing business.” The goals and moral understanding of a virulently secular government, however, only circumstantially reflect the goals and moral understanding of the Church. Therefore, Bishop Lynch’s dismissal of evidence that Catholic Relief Services has been using its resources in ways that are inimical to Catholic social teaching rings hollow. Catholic Relief Services isn’t the victim of isolated “mistakes” committed by a misguided employee here or there; it is involved in a problematic arrangement whose “mistakes” are intrinsic to its structure. Catholic Relief Services is, to an alarming degree, disengaged from its Catholic roots. (3) 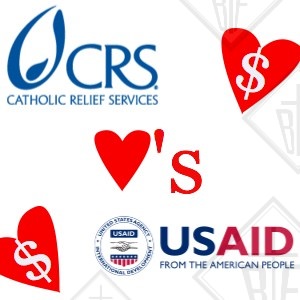 It will take time for the Church to sort this out. As the scandal of Catholic Relief Services’ anti-Catholic activities becomes more public and better understood, and as the Church in the “third world” becomes more vocal about its material and spiritual concerns with “first world” blunders, there is little doubt that the United States bishops will return to their former charisms of “doing Christ’s good” rather than some pale, worldly substitute.

Meanwhile, Bishop’s Lynch’s insinuation that “anti-abortion” work is not really, or at least not adequately, “pro-life” really does need to be addressed because it is increasingly bandied about as a talking point in the culture wars. “Oh, I can support this pro-abortion policy or politician,” the argument goes, “because it will bring more money to the poor, which is a life issue, too.”

Or, more aggressively, one hears, “Since more financial security will reduce the need for people to get abortions,” which isn’t the case, of course, “your opposition to this pro-abortion policy or politician is actually not pro-life.”

To dismiss an “anti-abortion” organization that complains its purposes are vitiated by a fellow “pro-life” organization is incomprehensible…if one has pro-life objectives.

Catholic Relief Services does take substantial amounts of money from the pro-abortion United States. The Catholic Campaign for Human Development does foster politically progressive “community organizing.” These facts do create difficulties for anti-abortion work. And that’s a problem.

(1) Ken Hackett, addressing the Catholic Social Justice Ministry Gathering in Washington, DC, February 25-28, 2001
(2) Steve Mosher, PRI president, during an interview with Mr. Randrianandrasana, published in PRI’s 8-7-13Weekly Briefing.
(3) The particular, problematic activities in which Catholic Relief Services is engaged have been detailed elsewhere. Population Research Institute has yet to publish its full report.

This article, Lynching the Population Research Institute is a post from The Bellarmine Forum.
https://bellarmineforum.org/lynching-the-population-research-institute/
Do not repost the entire article without written permission. Reasonable excerpts may be reposted so long as it is linked to this page.