Ed. Note:  This weekend begins one of the great American pastimes–college football. It is always an exciting time of year and one which we relish. Beer, brats, wings, tailgating, and cheering for our favorite teams! In particular–even though the principal authors here generally hail from Jesuit institutions–we at the Bellarmine Forum have always been Notre Dame fans. Our Chairman, the late Charles E. Rice, was one of the great professors that represented the best of “old Notre Dame.”   Unfortunately, it seems that “old Notre Dame” is leaving us quicker and quicker with each passing day. Recent stories of player misconduct and a university that increasingly caters to a specific segment of the population, have disappointed long-time fans of a collegiate athletic program that, until fairly recently, had done things differently from its counterparts. There was a time when the Catholic Faith permeated the university and its administrators were proud of their faith and were unashamed at professing it. Reprinted for you here is a 2002 article of Professor Rice highlighting one of those heroes. We humbly submit this to our readers to show that there are saints in universities and that there are examples to be emulated. May “old Notre Dame” return to us. 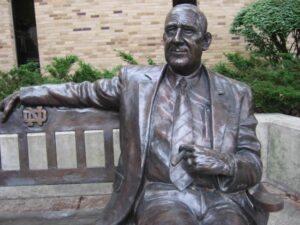 Who is that big guy with the politically incorrect cigar on the bench outside the Joyce Center? Moose Krause. All-American, coach, athletic director and truly “Mr. Notre Dame.”

That is the title of Jason Kelly’s excellent new book. If you have a Domer in your family, this takes care of one item on your Christmas list. Or you can find a miniature replica of Moose and the bench at the bookstore for only $1,500 (no kidding) [Ed. 2002 prices!]. Moose could not have afforded it on his salary, which never exceeded $30,000. He turned down job offers many times higher because he would not leave Notre Dame.

Edward Walter Krauciunas was born in 1913 into a “cash-poor but spirit-rich” family in Chicago’s Back of the Yards. His high school coach, Norm Barry, a teammate of George Gipp, gave him the name “Moose” and shortened Krauciunas to Krause. Krause entered Notre Dame in 1930, Rockne’s last year of coaching, and was an All-American in football and basketball. He joined Frank Leahy’s football staff in 1942 and was also the head basketball coach.

In World War II, Moose was a Marine Corps intelligence officer with an aviation unit in the Solomon Islands. He routinely did his own reconnaissance, squeezing into the nose turret of a B-25 with no parachute.

One night, a Moro scout, Antoun, led Krause and the chaplain, Father James Gannon, to Rabaul to recover the remains of six Marines. They escaped capture because Antoun hid them in a leper colony that the Japanese feared to enter. Krause later collected over $2,000 from the Marines to finance Antoun’s studies for the priesthood. Moose carried Notre Dame to the Solomons.

At a tense briefing before an important raid, he brought in 20 Moro scouts. The Marines expected the usual message, that if they got lost the Moros would bring them back safely. This time Moose turned to the young Moros and they broke into the Notre Dame Victory March in their own language. “The…200 men went berserk,” Gannon says, “laughing and cheering and whistling.” The raid was successful with not a man lost.

During 1946-49, Krause was Leahy’s assistant and head basketball coach. He served as athletic director from 1951 till his retirement in 1982. He built a program to serve all the students, emphasizing intramural and club sports.

In January 1967, Moose’s wife, Elise, suffered sever brain and other injuries when a car broadsided a taxi in which she was riding. She lost her rationality and control of her emotions. Moose Krause devoted himself entirely to the care of Elise until her death in 1990. He turned to alcohol but changed his life after a heart attack and pleas from his children. He became a leader in Alcoholics Anonymous.

Jason Kelly concludes that Krause’s greatest achievement occurred at Cardinal Nursing Home, where he spoon-fed meals and sang to his ailing wife. Although he described it as a “veritable crucifixion for both of us,” there was no self-pity in Moose.

“There’s really no place I’d rather be than in that room with your mother,” Krause said, “I know a lot of people feel sorry for me, but I’m the lucky one. I’m in the fortunate position of being able to extend care. That’s the easy part. Mother has the hard part.”

“I call him Saint Edward,” said Ara Parseghian. “If every person had that kind of compassion and…respect for his spouse, this would be a…lot better world.”

Father Theodore Hesburgh concurred, describing Moose as, “Absolutely the Rock of Gibraltar, the soul of integrity. If I ever met a saint, he was one of them.”

Moose’s son, Father Edward Krause, C.S.C., who teaches theology at Gannon University, calls Mr. Notre Dame the story of a whole generation who took God, the 10 commandments and their faith seriously. Moose, as Father Krause put it, had a special affection for John Paul II as a fellow athlete and successor to Peter. In his funeral homily in 1992, Fr. Krause quoted his father: “Unless my eyes are getting bad, the Bible doesn’t say, ‘Thou art Peter, and upon this teenie weenie pebble, I will found my debating society. [It doesn’t say] take up a Gallup poll, and tell ‘em what they want to hear.” Moose Krause knew what he believed and why.

College sports are now a major business, driven by money, media, and government regulation. Moose and his assistant, Colonel Jack Stephens, ran the show in a different, and, in various ways, a better era. The common wisdom has it that it took 23 people to replace Moose. The athletic department has new faces and new skills. But the important things have not changed, character and commitment. Moose would be pleased. [Ed. Again, this was written in 2002.]

Notre Dame will never see the likes of Moose Krause again. So buy the book. You can sit on the bench and read it with Moose. You will learn something about the real Notre Dame. And about yourself. 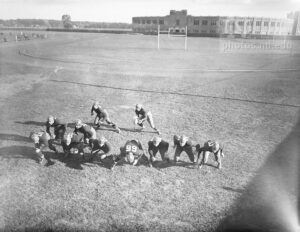 Professor Charles E. Rice wrote this article for October 9, 2002 edition of The Observer. It was reprinted in Right or Wrong? 40 Years Inside Notre Dame (St. Augustine’s Press).

This article, Notre Dame Will Never See the Likes of Moose Krause Again is a post from The Bellarmine Forum.
https://bellarmineforum.org/notre-dame-will-never-see-likes-moose-krause/
Do not repost the entire article without written permission. Reasonable excerpts may be reposted so long as it is linked to this page.