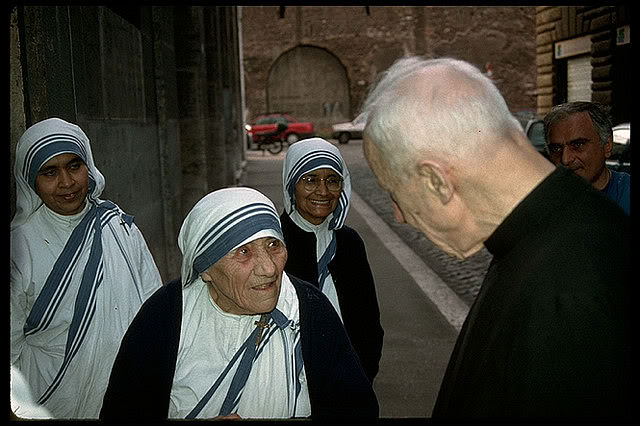 Father Hardon and Mother Teresa meet on the street.  Original image from Photobucket.

Although many people think Mother Teresa was already canonized, some thinking it happened several times already, today it was official.  Some news services are calling her Saint Teresa.  Even Pope Francis said it was going to be difficult to change how we refer to her, from “Mother Teresa” to “Saint Teresa.”  I think, mostly because the name Teresa is already nicknamed so much… with “Big T” and “little T” etc…  that it’s probably easiest to just call her “Saint Mother Teresa.”  But with all the things being said today about her, I wanted to highlight those things an expert on her life said.

Later, Mother Teresa did permit this, and the fruits were incredible, as Raymond Cardinal Burke reported.

The Source of Mother Teresa’s Power

After Saint Mother Teresa passed away, Fr. Hardon compiled a list of things about her spiritual life that we can all learn from.  Some only think of her work with the poor, or her tireless and poignant messages on behalf of the unborn in the face of the powerful advocates of abortion.  But, she didn’t do this by sheer will power or positive thinking.  Her secret?  Union with God.  But how?  That’s where Fr. Hardon comes in!

1. Deep Faith in the Real Presence in the Blessed Sacrament

Says Fr. Hardon, “without this faith in the Blessed Sacrament, there would have been no Mother Teresa.” Whoa! Take a look at the rest of his observations, and find in them some resolutions for our own lives:

In my estimation this was the bedrock of Mother Teresa’s spiritual life. She believed, without a shadow of a doubt, that Jesus Christ is really, truly, and substantially present in the Blessed Sacrament.

So deep was this faith that she declared, and it must have repeated hundreds of times: “I make a holy hour everyday in the presence of Jesus in the Blessed Sacrament. Our holy hour is our daily family prayer where we get together and pray the Rosary the first half-hour and the second half-hour in silence.”

Father Hardon was great at boiling things down to the essential gris.  If you want to imitate Mother Teresa, then it appears all you need to begin is found right there in that quote.  Not only did she pray a Rosary with Jesus every day, but spent an hour with Him.

The more closely I came to know the Missionaries of Charity, the more I realized how strictly regular was their daily life. Rising in the morning at four-forty, on feast days at five-ten, was only the beginning of their regular routine. There are set times for prayer, set times for meals, set times for apostolic work.

Needless to say this was only a pale reflection of Mother Teresa’s own personal life. The result, however, was astounding: the regularity produced extraordinary fruitfulness in the service of others.

In America, we call that being OCD, but it isn’t. Having a set routine is known to free the mind to do more. Fr. Hardon also observed that the poor are trained by Providence to lead regulated lives. Adding my own two cents here: Regularity also seems to provide more opportunity to Providence to work in your life. I’m certain that families with small children can only dream of having such a regimented schedule — children seem to have all sorts of unscheduled surprises, but perhaps there is a way to impose a general order on the schedule?

3.  Apostolic Zeal for the One True Faith

In Father Hardon’s eulogy on Mother Teresa, her described the situation on catechetical instruction starting at the point when Pope John Paul II asked Mother Teresa to teach the faith directly:

When Mother told Pope [John Paul II] that her Sisters were not trained for this apostolate, he told her, “train them!”

I had known the Missionaries of Charity for some years before she got this order from the Holy Father. But then my life changed drastically. Mother Teresa was instructed by the heads of four congregations in Rome to start training her religious to teach the Catholic Faith. At the same time I received corresponding orders from the Vatican to work with the Sisters in training them for their new apostolate.

Words cannot describe the impact which this had on the Missionaries of Charity. They have been phenomenally zealous and effective in teaching the true faith. Located in over one hundred countries throughout the world, I can honestly say they are now the largest missionary order in the world. But now, the word “missionary” has come to mean teaching the faith which God became man to reveal to the world.

Our lives are no different.  Even here on the website, we have included the easiest to understand and comprehensive Catechism we know of.  Everyone will learn more about their faith by reading it, but more importantly, the Bellarmine Forum edition of the Catechism Explained makes it so much easier to describe the strangest parts of the Catholic faith to others!  All of us need to help others understand the faith revealed to us by Jesus Christ!

4.  A Constant Spirit of Prayer

Boom.  Combined with item #1, she lived out what every doctor of the church has told us:  “we must always pray!”  Explains Fr. Hardon:

It was not coincidental that so many photos of Mother Teresa show her with a Rosary in her hand. Believe me this was not by chance. She literally lived in the presence of God and constantly depended on His supernatural assistance. It was from Him that she derived, as she said, all the light she had ever received to know what God wanted her to do. It was from Him that she received all the strength to do His will.

Too practical for words.  Why would we resist to be the same?  If we are to live the spiritual life, then we must accept the graces God gives us to do good.  After all, Jesus even told us, “without Me, you can do nothing.”

5.  Deep Apostolic Zeal to Care for the Poor

I’d be surprised if anyone can levy a reasonable challenge to this aspect of Mother Teresa.  Obviously animated by the parable of the Rich man and Lazarus, her whole motive and means were targeted to serving the Poor.  She didn’t do it with programs, slogans, and felt banners in the suburbs, though.  It was real.  Says Fr. Hardon:

The Missionaries of Charity are to give their free and whole-hearted service to the poorest of the poor.  In one sentence, that is why she founded her community.  During my stays in Calcutta, I will never forget the million or more people daily sleeping on the sidewalks or in the streets, with no home to go to.

It was her deep love for these desperately poor people that inspired her to serve whatever needs they had.  As she often told me, the deepest need of the poor is to know that someone loves them.

This does not mean that we need to move to Calcutta to imitate her. We should be aware of opportunities around us.  I’d like to point out what Father Hardon said of our environment, though, “We Americans are living in a dream world. Mother Teresa lived in the real world in which most of the human race goes to bed hungry everyday.”  There are the poor among us, though.  We should just be aware of how well we have things.

The was no naivety to her methods.  She was innocent as a dove, but her prudence definitely proved her to be wise as a serpent, as Our Lord told us to be.  For instance, when she was bringing her Missionaries to New York, she confronted Cardinal Cooke directly and made him promise:

“However, I want to make sure that our Sisters have only the best priests in the Archdiocese as their chaplains, confessors, spiritual counselors and retreat directors.” She had no illusions how indispensable are solid priests to direct the spiritual lives of her community.”  –Mother Teresa to Cardinal Cooke

I love examples like this because it shows she wasn’t some spineless push over that many people try to reduce sanctity to.  She was aware and put prudence into action with her actions!  We should pray for the same prudence and practice it as well!

Father Hardon synthesized her example with his own council to everyone wishing to get to Heaven…  we must always pray.  pray for what?  to know what God wants us to do!  In his words:

In one sentence, this might be a synthesis of the spirituality of Mother Teresa. All she ever wanted to do in life was the will of God. But she knew there was no other way to know what God wanted, every moment of the day, except by asking Him for the grace to know His divine will and then to do it with all her heart.

BONUS:  Abandonment to Providence, even in Denying Government Assistance

It is probably a surprise, or a shock even, to learn that Mother Teresa would not accept one penny from the government for the financial support that her Missionaries of Charity needed.

I wanted to add this because I think it’s important on so many levels.  She wasn’t making a busybody feel good slogan with her order!  Even more so, her reliance on Providence was so deep, woven into the fabric of her order directly, even, that she’d rather see the whole thing fail if they didn’t have the means than to take government money. 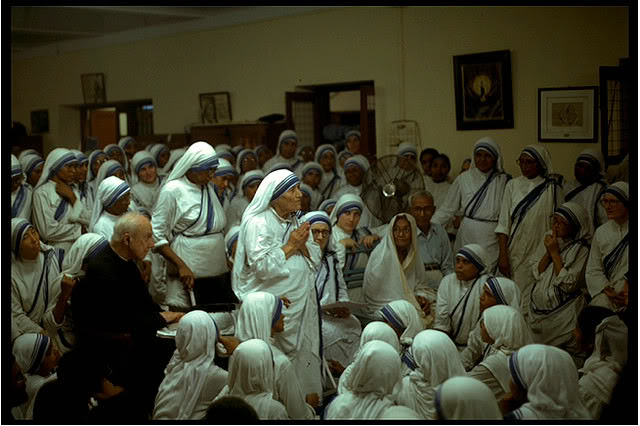 Father Hardon sitting with the Missionaries of Charity

Saint Mother Teresa, pray for us!

I don’t know who I should credit for those images.  They are floating around on the internet, and they appear to all lead back to a photobucket account, but they were also posted here at freerepublic.

This article, 7 Secrets Fr. Hardon Observed about Saint Mother Teresa’s Power is a post from The Bellarmine Forum.
https://bellarmineforum.org/7-secrets-fr-hardon-observed-saint-mother-teresas-power/
Do not repost the entire article without written permission. Reasonable excerpts may be reposted so long as it is linked to this page.