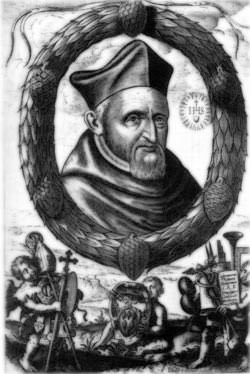 Today is the feast of St. Robert Bellarmine, the patron of the Bellarmine Forum/Wanderer Forum Foundation. It is the perfect opportunity to illustrate one of the many, many, many examples from his life of why he is the perfect saint for our time in America.  The trouble is that there are so many reasons! We could discuss his teaching on the Real Presence, we could discuss his teachings on Marriage, or so many other confusing doctrines today. One example rang a bell for me, and I want to see if you think it’s possibly a message for today.

No reader here would be surprised if I said that Pope Francis has done things that are causing great confusion.  For instance, the recent discussions on the letter about marriage, and communion for the divorced, is a mess. There is no getting around it. If the things being reported are true, it is wrong. There are several other examples, but I think this one in particular is the best to highlight. What are we supposed to do? Can we find some guidance in Bellarmine?

In his treatise on purgatory, which Fr. Hardon described as “wonderful”, Bellarmine urges the faithful to avoid venial sins because even these “small sins” offend the infinite majesty of God and are punished by Him.  But, there is a story in the treatise that I find illustrative for us today. It is a story about Pope Innocent III, and how he was saved from hell.

Even Good Popes Can be Hell Bound

Immediately, that should raise an eyebrow because Pope Innocent is regarded as having done great things for the Church and written many good things that clarified the faith. But, Bellarmine gives us the story from St. Lugartis (Lutgarde), the cloistered nun and mystic to whom Innocent appeared. She lived during his papacy, but shortly after he passed away, he appeared to her in a vision and explained that he had been weak during his papacy and would have been destined to hell.

Pope Innocent explained to her that he made peace with our Lord before his death. He further explained that Our Lord revealed to him that it was her prayers and sacrifices that rescued him from condemnation to hell!

But, he now had a sentence in purgatory where he would stay until the end of time. Just think about that for a moment! On one hand, you might escape hell, but spend the rest of time until final judgment in purgatory. We should all want more than that!

Besides the pain of waiting all that time, there must be some merit to being in Heaven during the passing of years on earth. I say that because Pope Innocent asked St. Lutgarde to redouble her prayers on his behalf in order that he may be freed from purgatory before the consummation of the world. She did this for him. Years later, he appeared again to her to thank her — her prayers and sacrifices earned his release from purgatory.

Did St. Lutgarde’s Prayers Save the Papal Legacy from Hell As Well?

She was canonized. Let’s get that part straight. I wonder, however, if in her absence, that is, if there was not a St. Lutgartis’s prayers and sacrifices, if Pope Innocent III’s legacy might have been awful.

The temptation in the confusion today, especially that confusing which appears to be coming from Pope Francis himself, would be to retract from the mess. Bellarmine, however, through his example, shows that we ought to take up the weaponry of prayer and sacrifice…

We may even find our own canonization within it! More importantly, we have to wonder if Innocent III’s legacy is remembered well for the Church because there were people that, during his life, prayed him out of hell, and later out of purgatory.

Stay tuned for more today about St. Robert Bellarmine and what he’d say about the confusion itself.

St. Robert Bellarmine, pray for us!

This article, Bellarmine on Hell-Bound Popes. Our Patron’s Feast today. is a post from The Bellarmine Forum.
https://bellarmineforum.org/bellarmine-hell-bound-popes-patrons-feast-today/
Do not repost the entire article without written permission. Reasonable excerpts may be reposted so long as it is linked to this page.