I have a buddy named Gennaro, and every year I think it’s the coolest thing because on his feast day, one of the most famous blood miracles occurs or does not occur. It’s sort of like the groundhog day of the Catholic calendar, in the sense that the event might happen, or it might not. Some years, the St. Gennaro’s Blood liquefies, and other years it doesn’t. So, unlike me, who has four name days a year, his is always full of suspense.

ANSA Italy reports today that the eucharistic miracle happened and the martyr’s blood stored in a glass reliquary re-liquefied.  They sum it up this way:

For religious and superstitious Neapolitans, the ritual’s success is a good omen for the city.

The miracle takes place on the anniversary of the martyrdom of San Gennaro (St. Januarius) in September 305 AD.

The dried blood of the saint is preserved in two glass phials and traditionally liquefies three times a year, the Church says, thanks to the devotion and prayers of the faithful.

Aside from the anniversary of the saint’s beheading, the miracle also takes place on December 16 to commemorate the 1631 eruption of Mt. Vesuvius, believed to have been halted by the saint’s intervention, and again on the Saturday before the first Sunday in May.

Thank God. I love it that Jesus gives us these miracles to help show that He is. For as much as we live in this veiled world, and will have that veil lifted in the next, it’s good to get these hints of what is to come.

So, I was happy to see that.

Later, I’ve been seeing this and similar things posted all around social media. 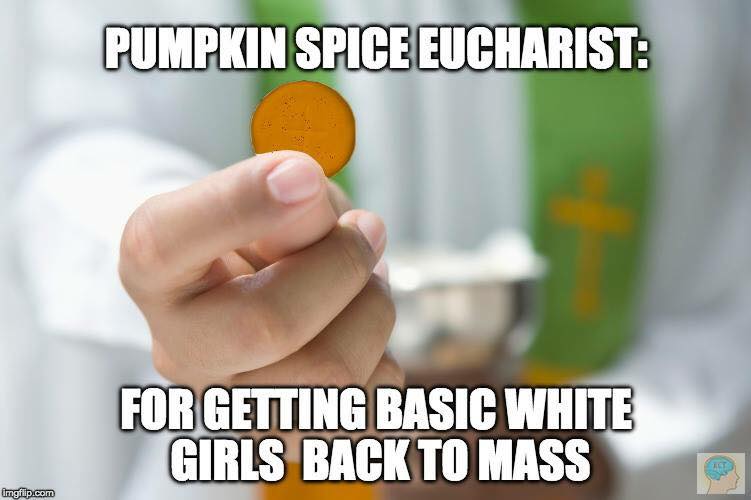 Now, don’t get me wrong — I understand humor. This is funny because we know it should not happen. The Blessed Sacrament is not flavored by anything other than the wheat of which it is composed.

I do recall a hospital chapel in 1999 or so in an unnamed United States city have Sunday Mass with cranberry nut bread, to “celebrate the season of harvest.”

I recall reports of an unnamed parish in an unnamed city, year over year for the span of a decade, changing the bread used for their “ceremonies” (although this was listed as a parish of an Archdiocese, and these “ceremonies” happened when that parish advertised Mass was to occur) using seasonal bread.

In other words, such sacrileges are in practice today.

We live in a time of woeful, awful, non-belief in the Blessed Sacrament, instituted by Our Lord as the way for Him to be physically with us, and to feed us with His Divine Essence. He said “real food” in fact.

Many people who call themselves Catholic do not believe that. They take Communion in the Hand, for instance. They busybody themselves as extraordinary ministers even though that practice was squashed by Rome.

If not Sacrilege, then Profaning of the Sacred.

Even if it does not rise to the definition of sacrilege (from Hardon’s Modern Catholic Dictionary):

“SACRILEGE. The deliberate violation of saced things. […] The vioaltion implies that a sacred thing is desecrated precisely in its sacred character. It is a sin against the virtue of religion.

In reparation to Our Lord as Told At Fatima

I join with the Angel that came to Fatima…   recall that he told us to pray this way:

MOST Holy Trinity, Father, Son, and Holy Spirit, I adore Thee profoundly.
I offer Thee the Most Precious Body, Blood, Soul, and Divinity
of Jesus Christ, present in all the tabernacles of the world,
in reparation for the outrages, sacrileges, and indifference
by which He is offended.  And through the infinite merit
of His Most Sacred Heart, and the Immaculate Heart of Mary,
I beg of Thee the conversion of poor sinners.

This article, Runaway Memes: Pumpkin Spiced Sacrilege on the Feast of St. Gennaro is a post from The Bellarmine Forum.
https://bellarmineforum.org/runaway-memes-pumpkin-spiced-sacrilege-feast-st-gennaro/
Do not repost the entire article without written permission. Reasonable excerpts may be reposted so long as it is linked to this page.