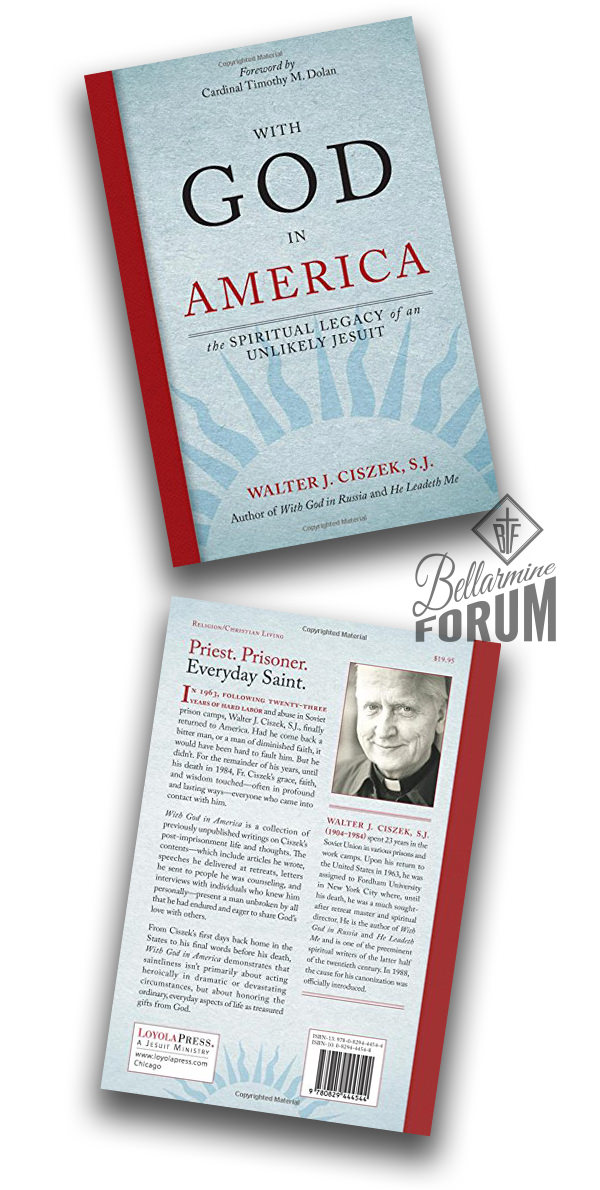 In 1963, the U.S. State Department arranged with the Soviet Union a prisoner swap. They had recently detained a Russian spy. In return for the secret agent, they requested Fr. Walter Ciszek, S.J., who had spent 23 years of hard labor in Soviet prison camps. In 1937, Fr. Ciszek was sent to Rome to learn the Russian language and the Russian rite of the Mass. The goal was to send him into Russia as a missionary, since the Soviets had pretty much demolished the Russian Orthodox Church. However, entry into Russia was forbidden, so he was sent to Poland to teach at a Jesuit seminary.

After Poland was invaded by the Germans and the Soviets, he boarded a train and snuck into Russia, where he was soon captured and sentenced to 5 years of solitary confinement, and then sent to the labor camps in Siberia. It was only in 1955, after having received a letter from Fr. Ciszek, that his family learned that he was still alive. From then on, they pressed the U.S. Government to obtain his release.

After his return to America, he settled into the John XXIII Center at Fordham University, where he wrote two books that chronicled his spiritual journey, With God in Russia and He Leadeth Me. They tell the tale of a stubborn young priest who learned, after much suffering, that true freedom comes from the willingness to abandon one’s will to the will of God. It was a powerful testimony, especially coming from someone, who up until that point, had spent most of his adult life without physical freedom. He says in He Leadeth Me:

“The body can be confined, but nothing can destroy the deepest freedom in man, the freedom of the soul, and the freedom of mind and will. These are the highest and noblest faculties in man, they are what make him the sort of man he is, and they cannot be constrained. Even in prison a man retains his free will, his freedom of choice. Even in prison, a man can choose to do good or evil, to fight for survival or to despair…”

Soon afterwards, Fr. Ciszek settled into the ordinary life of a priest and became a much sought after retreat minister and spiritual director.

Never Before In A Book, Fr. Ciszek’s Gems of Writing After The Gulag

Five years after his death in 1984, the cause for his canonization was officially opened. In 1990, Rome gave word that the canonization process could continue and he was given the title “Servant of God”. Now a new book has been released, With God in America, The Spiritual Legacy of an Unlikely Jesuit (Loyola Press), that is a collection of unpublished writings of Fr. Ciszek’s post-imprisonment life. The co-editors of the book, John M. DeJak and Rev. Marc Lindeijer, S.J., have been devotees of Fr. Ciszek’s since the 1990’s and are hoping this new volume of his writings will help to promote his cause.

The book is comprised of interviews from people who knew him best, retreat notes, spiritual and scriptural reflections, and personal letters of spiritual direction. The end of the book has eye-witness accounts of his last days, and an excerpt from With God in Russia. One of the things that impressed me is that, after the publication of his books, he received thousands of letters from people seeking spiritual advice, and he answered almost every single letter he received. He did not believe in coincidences, and if someone was reaching out to him, he saw it as a call from God to be of service. Like Padre Pio, he viewed them as his “spiritual children” and worked tirelessly to help lead these souls to Christ. As you read through these letters and reflections, what comes across is his deep humility, peace, and trust in the providence of God.

There is a delightful chapter in the book with musings from his fellow Jesuits at Fordham University. He is often described as someone with a great sense of humor, at home with academics, as well as with janitors. Although Fr. Ciszek was ordained in 1937, he did not take his final vows as a Jesuit until 1964. The final year of formation as a Jesuit is a Tertainship, where the newly ordained go on a thirty-day retreat and intensive study. When Fr. Ciszek returned to the United States, he was given a dispensation from the Tertainship and allowed to take his final vows, which provoked the amusing response from his fellow Jesuits “Wally’s twenty-three years in Siberia were considered equal to that one year of Tertainship!”.

However, it is the chapter of the book entitled “The Spiritual Teacher” that had the most profound impact on me. Fr. Ciszek gave a series of retreats for religious sisters and priests. In this chapter, he talks of the mystery of suffering, humility, faith and patience with ourselves. His spiritual lessons are pragmatic and accessible.

For instance, on suffering, he says:

“If we find it impossible to pray when we are hurting – I mean really hurting – do you think God will mind very much? For how much closer can we get to him, how much more can we raise our minds, our aching minds, to him, and our hearts – perhaps even, for a while, bitter hearts to him, than when we are suffering? We may not be saying prayers of love and devotion, but we are close to him; we’re with him even as Christ was with him.”

“Humility is the most elusive of all virtues. It’s like trying to grab a handful of water or trying to pick up a blob of mercury. On the one hand, I have to be humble while not realizing that I am humble. On the other hand, I can’t deny that I have gifts, because this would be denying my own self-knowledge, and self-knowledge is the very aim of humility! I have to have pride in my work, yet I have to work with a humble spirit! Pretty confusing, is it not?

“Actually the best way to work for practical humility – beyond praying for it, of course, and dutifully meditating on who we are and who God is – is to go to humility through the back door, not thinking so much about working to gain humility but rather fighting against those sins that stem from pride.”

“If we have a living, trusting, acting faith, then we know that God is around every corner of our life, that he does indeed walk with us and talk with us and love us, so deeply, so immensely that our life for him, our dearest friend, is like a tiny flame of a match compared to the burning world. Do we act on this all day long? Don’t we often act as though God is somewhere out there in the vast, impersonal sky, too concerned with the really big things of the world to be thinking of us? Aren’t we often like the apostles in the boat, thinking they have to wake God up so that he will pay attention to us?

“For we just can’t believe that we are so important to Him because He loves us, and that his love is part of every second of our life. As this second goes by, God loves me and cares for me; no second of the day is different!”

On patience with ourselves (so appropriate in this Year of Mercy):

“For you see, he understands our weakness, our prayer distractions and lack of perseverance in good, our laziness, our intemperance, and even sins against purity that sometimes even the holiest people fall into, find, I am sure, a merciful forgiveness. Remember the beautiful Psalm 77: ‘But he is merciful and will forgive their sins and will not destroy them; many a time did he turn away his anger and did not kindle all his wrath. He remembered they are flesh: a wind that goeth and returneth not.’ So to get terribly angry with ourselves, to get disgusted with this human nature that God gave us, to live in impatience with our own lives, is not called for even in sins of weakness. All he wants us to do is say ‘I am sorry, God.’ That’s all he wants, all he demands.: ‘Go now and sin no more.'”

The book is filled with treasures like these. Many of the people who are interviewed speak of Fr. Ciszek’s demeanor and how he radiated the love of Christ. Sister Andreja Vladia, who met Fr. Ciszek in 1983 said “Father made me feel so comfortable: no rejection, no judgement, no refusal to love – he was so Christlike”.

I have a rule of thumb about priests and you can take it to the bank. Show me a priest with a strong devotion to Our Blessed Mother, and I will show you a holy priest. Fr. Ciszek loved Mary, and when he died on December 8, 1984 (the feast of the Immaculate Conception), he was sitting in a chair praying the rosary.

For those who are familiar with the life of Fr. Walter Ciszek, S.J., With God in America, the Spiritual Legacy of an Unlikely Jesuit, is a must read. For those who are not, It is sure to create new devotees of this saintly man. It certainly did of me.

SUPPORT THE BELLARMINE FORUM!  Order your copy easily on Amazon, and the Bellarmine Forum will receive an affiliate fee!

IMPORTANT DISCLAIMER:  Because there are various laws that advise or enforce that we disclose a monetary interest in the links, we want to be clear:  The links to purchase the book from Amazon provided on this page result in advertising fees being paid to the Wanderer Forum Foundation / Bellarmine Forum. We wholeheartedly endorse this book and Fr. Ciszek without receiving any monetary benefit, but since it is available, we have added these affiliate links in order that we may receive a cut of sales, if any.

This article, Gain the Freedom to Love God Anywhere, Anytime! 5-Star Book Review: With God in America by Fr. Ciszek is a post from The Bellarmine Forum.
https://bellarmineforum.org/gain-the-freedom-to-love-god-anywhere-anytime-5-star-book-review-with-god-in-america-by-fr-ciszek/
Do not repost the entire article without written permission. Reasonable excerpts may be reposted so long as it is linked to this page.