Our Lady of Fatima and Two Humble Priests 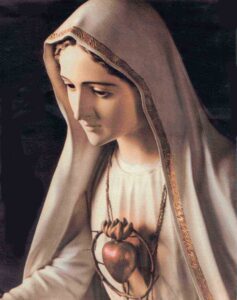 Having learned of Pope Francis’s desire to entrust his Pontificate to Our Lady of Fatima, I decided to settle down to the famous Fatima documentary from the mid-1980s narrated by Ricardo Montelban. Besides enjoying the suave and debonair devout Catholic and proprietor of TV’s Fantasy Island, something struck me in this documentary about Our Lady’s message to the children. Something that may sound strange to modern ears. On July 13, 1917 Our Lady said to the children:

When you shall see a night illuminated by an unknown light, know that it is a great sign that God gives you that He is going to punish the world for its crimes by means of wars, hunger, and of persecution of the Church and the Holy Father.

After this she went on to ask for what has now become known as the First Saturday devotion in order to stem this evil.  The “night illumined by an unknown light” did occur as Our Lady had predicted on January 25, 1938, and newspapers all over Europe reported on the phenomenon. Most suggested it was the aurora borealis, but a letter of Sr. Lucia (one of the Fatima children) to the bishop of Leiria on August 8, 1941 states that it was not. Rather, in this letter, she reiterates that

…God was pleased in this way to make me understand that His justice was ready to let fall the blow on the guilty nations, and in this way to begin to ask with insistence for the reparatory communion of the First Saturdays and the consecration of Russia. His end was not only to obtain mercy and pardon for all the world, but especially for Europe.

Several months after this celestial phenomenon, German troops marched into Austria in the Anschluss and World War II was not far behind.

Were World War II, the Cold War, Korea, Vietnam (and all the other conflicts that resulted from World War II) really a punishment from God? Does God punish us in this fashion? These are tough questions because they bring up the frightening specter that God wills evil, which we know not to be true. Yet Our Lady used these words. Hers are words not to be taken lightly. How to make sense of this aspect of the Fatima message–even more so that Pope Benedict XVI stated very clearly that Fatima is more relevant today than ever, and that our current Holy Father is entrusting his papacy to Our Lady of Fatima?

I think the answer to this difficulty may lie in the loss or neglect of grace. What is grace but simply God’s life within us; the lifeblood of the soul; the oxygen for the lungs of the virtues. It is a free gift of God if we cooperate with Him. This was articulated well by Fr. Walter Ciszek, S.J.

[G]race is always given to us, but we must learn to recognize it in the people and circumstances presented to us by God’s Providence, in the thoughts and inspirations that tug at our minds and our hearts. We know that we do not always respond to God’s grace for his grace always demands of us sacrifice, renunciation of self-will, effort and an untiring spirit of dedication–and the practice of these things does not come easily to the young, or the tired adult, or the old. Yet that is what the kingdom of God is all about.

Fr. Ciszek’s conclusions as to the rejection of this grace are sobering and can help us to understand what Our Lady was trying to tell us at Fatima and what she continues to tell us today:

Knowing how little of grace is accepted and realized in our own personal lives, we can imagine how much of his grace is spurned or rejected by those around us. In this way we come to understand, too, why there exists so much evil, sin, violence, wars, hatred, immorality, persecution of religion, and denial even of God himself in the world today. These things must follow, so long as men refuse to accept God’s grace and do His will.

So God’s punishment is the inevitable result of our not living in accord with His design for us. How much more do we suffer His punishment as Catholics who have access to the treasury of His grace through the Church? If Catholics do not reform themselves to be a “light for the world” and obtain and maintain God’s grace in their souls, their efforts–perhaps well-intentioned–will always be lacking and will prove ultimately to be for naught. Is this why societal upheavals occur–the same-sex marriage debate, wars, abortion, extreme poverty? Perhaps this is what Pope Francis means when he suggests that the Church must never be an NGO, but rather the Kingdom of God in the world. The essence of this Kingdom is holiness. This is what Our Lady is telling us, what the Church has constantly taught, and what we are being told by a couple of humble Jesuits–one of whom may be ultimately known as the Pope of Fatima.

This article, Our Lady of Fatima and Two Humble Priests is a post from The Bellarmine Forum.
https://bellarmineforum.org/our-lady-of-fatima-and-two-humble-priests/
Do not repost the entire article without written permission. Reasonable excerpts may be reposted so long as it is linked to this page.