I think it might be a general experience that Thanksgiving Day tends to bring extended families together more than even Christmas Day. I’m not sure why this is or whence this came about. My own recollections of Thanksgiving as a kid take me to my grandparents’ basement where two long tables were spread with all the fixings. It is my memory that Grandpa (“Papa Mike”) would be in charge of the turkey, while Grandma (“Grandma Helen”) would be in charge of everything else. There was a wood burning stove in the basement that kicked out a generous amount of heat, a “kids’ table” (at which I actually preferred to be–even into adulthood) for all the cousins, and a table for the drinks: pop, beer, wine. I think it was also at Thanksgiving during those halcyon days, witnessing the mixing of strange cordials, where I also learned for the first time the term “Fuzzy Navel.” It was rare that this collection of relatives got together with such ritual. The meal itself also had a ritual: the Prayer Before Meals with a bit of an ad lib on the propriety and recollection that the day was set aside for this, the feasting, and the political arguments. 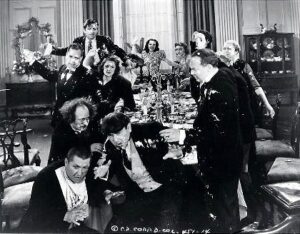 This last was such fun, and it would be a lie to say that the vein on Uncle Louie’s forehead did not pop out when my Dad suggested that he consider voting for Ronald Reagan. The arguments were legendary, Dad and I (admittedly, in youthful exuberance) took the conservative line, while the antagonists–protagonists, from their perspective–were generally Grandma and Uncle Louie, the unrepentant New Dealers. In the haze of the years, I recall issues of economics and government action on social issues as dominating most of the conversation. Phrases such as “the Democrats are for the working man” and others were routinely hurled in the direction of us conservatives. My factory worker Father (a “working man” if ever there was one!) would usually reply with a one-liner, sometimes substantive, sometimes designed to have fun with them. I would sit back and watch the carnage, alternatively serving myself more turkey or stuffing. It was great fun! Papa Mike–for the most part on the side of the New Dealers–generally took the common sense approach regarding both politicians and union leadership:  “They’re all crooks.”  Papa’s intervention was my first acquaintance with Thomistic thought, for I am almost positive that he followed up his position with “and this can be shown in three ways….”

As we approach Thanksgiving I thought of this in light of the many battles currently being waged among Catholics and others on the immigration issue and the Syrian refugee crisis in particular. Couple this with the insidious nature of ISIS and the tactics employed to get into Western nations to murder innocent people and you have a very difficult problem. The poverty of modern discourse on such complicated issues is made manifest by the appearance of the “meme” and the soundbite nature of internet conversation–be it on social media or elsewhere. One meme that has gotten a lot of traction in recent days among Catholics is one that analogizes the Syrian refugee crisis to the Holy Family finding no room at the inn that first Christmas many years ago. My purpose here is not to demonstrate why that analogy fails, that is fodder for another article. But the meme itself and the arguments behind it belie a conviction that there is a black and white Catholic position on this particular issue. There is not. Like my Dad and Uncle Louie, one can be a good Catholic and on opposite sides of this issue.

there is no moral imperative to care for refugees in all circumstances (or to invite them into one’s home or country). There is a moral imperative for political leaders to have care for those who are entrusted to them, i.e., citizens.

This is akin to the position of other faithful Catholics such as Patrick Buchanan and the Rockford Institute’s Tom Piatak. It is in line with the traditional Catholic understanding of the role of those in political authority in enacting laws–which would also encompass immigration policies, etc (Cf. Aquinas, Summa Theologiae, I-II, 90, 1-4). My position does not contradict the three non-negotiables of Catholic Social Teaching, namely: (1) every human person is made in the imago Dei, (2) the principle of solidarity, and (3) the principle of subsidiarity. Furthermore, it does not contradict what my good friend and intellectual sparring partner on this issue, Mark Rohlena, pointed out as the position of the Catechism, which is the most authoritative statement of the Church’s articulation of the general issue (cf. CCC 2241). In mentioning my position in such a summary fashion, I assume the risk of my readers taking me to task in one particular or another. Perhaps that will occasion a more extensive treatment of the position in another piece. But this is not the point of this article.

The point of this article is to highlight that Catholics can and do disagree on issues that require prudential decision-making. There are certain things that are non-negotiable (e.g., the right to life, the nature of marriage, the dogmas of the Creed, the aforementioned three fundamentals of Catholic Social Teaching), but one can be a good Catholic and take a position on an issue such as immigration or the refugee crisis and it can be at variance with another Catholic’s position. My problem in the current discourse is with the “professional Catholic apologists” who have large audiences and are strident in the conclusions they have drawn from their read of the situation and who seem to claim an orthodoxy for their position, seeming to bulldoze those who intelligently disagree.

So what to do? Try to leave passion aside and reason out the answer. Don’t assume the worst of your opponent or assume that his position is driven by politics or fear versus an application of first principles to the evidence (if it is driven by politics vs. authentic Catholic teaching and philosophical and legal principles, it will be apparent soon enough). Have the argument; seek the best information; listen to both sides; martial the evidence; attempt to persuade; and let the chips fall where they may! And, importantly, no matter where one might fall on the issue, recognize that everyone can do something for the suffering innocents: pray for them and help as you can. Their cries are not unheard by Our Blessed Lord and our prayers and sacrifices are most efficacious.

Finally, be like Dad and Uncle Louie at Thanksgiving–and raise your glass after the argument as a toast to the Lord who permitted us the blessings we, unworthy as we are, all have received in this country.

This article, Refugees, Immigration, and Catholic Discourse is a post from The Bellarmine Forum.
https://bellarmineforum.org/refugees-immigration-and-catholic-discourse/
Do not repost the entire article without written permission. Reasonable excerpts may be reposted so long as it is linked to this page.