Back in the 90s, I remember seeing images of then Archbishop Rembert Weakland donning a miter that bore an upside down triangle with a rainbow and a rainbow chasuble. During those years, it was common to hear rumors of Churches being “renovated” and the end result being white washed interiors and sanctuaries being leveled and converted to some sort of “in the round” design akin to stonehenge or some sort of druidic or pagan site. In the wake of the nonsense, there almost always seemed to be people with “eastern”-flavored nonsense. I’ve written about Madame Blavatsky and mentioned Theosophy before as the error of Russia masquerading behind communism and others fronts. When I commented on the rainbow symbolism, I mentioned that Blavatsky planned to push eastern mysticism to dilute Christian (i.e. Catholic) practice in the West. I’ve always noted Fr. Hardon’s advice that the devil is so strong today because of the Judases in the Church, among other things.

I made it very clear that AmChurch is not new and gave some history of it. For many Catholics today, especially it seems those active online, they either forgot or weren’t aware of these things back then. You had to either read the Wanderer or be in a parish of hold-outs against the tide of destruction within the Church. I am not engaging in hyperbole. For some reason, we got a respite for a while starting around the late 90s and into 2010 or so. Just long enough, it seems for people to have forgotten just how ferocious the open battles of the 80s and 90s really were. I’m sad to note again that my pronouncement that AmChurch returned wasn’t limited to Church of Our Saviour in New York. I’ve been hearing about things here and there for several years now, but Church of Our Saviour was the most egregious. Its tactics haven’t changed, either.

In Forensics of an AmChurch hit, I mentioned that there is a pattern they follow over and over, a play book born of hell — a “best practices” guide of sorts on how to drive all orthodoxy out of a parish. The vacuum created by these egregious attacks leaves plenty of space to fill the void with hippy garbage (like hare krishna chanting), questionable apparition mania (and attendant pentecostalist mania), and heterodoxy that invites error and dilutes catechism. Sadly, that’s exactly what is happening again today. It’s not new.

Church of Our Saviour Hare Krishnas 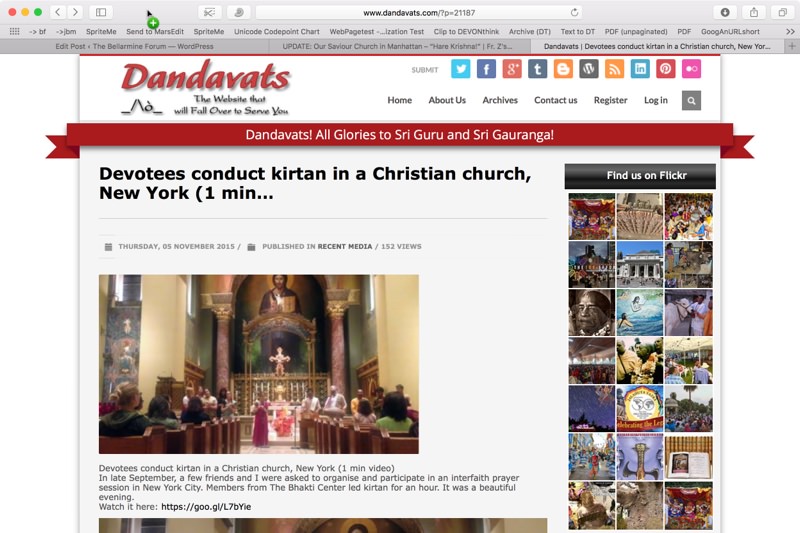 I’ve gotten numerous links from friends over the past days, many pointing to a post on WDTPRS, and some pointing me right to the Hare Krishna page.

This video shows what happened for an hour in the Parish, a hare krishna ritual:

Church Kirtan in NYC; Video 2 of 3In late September, a few friends and I were asked to organise and participate in an interfaith prayer session in New York City. Members from The Bhakti Center (Official) led kirtan for an hour. It was a beautiful evening.Please watch in HD.Part 2 of 3. Part 1: https://www.facebook.com/gateen/videos/10204609885561313/Part 3: https://www.facebook.com/gateen/videos/10204609928802394/

A Krishna kirtan is a mantra repeatedly sung. Wherever else such a thing is done, a consecrated parish in the presence of the Blessed Sacrament is not the correct place, and quite possibly a desecration of the Church. Hare Krishnas do not worship Our Lord, but they chant and sing to worship Krishna, a manifestation or avatar of the Hindu god Vishnu. Thus, the parish was used to worship a god other than God the Father, Son, and Holy Spirit. Last time I checked the First Commandment, that’s not what should happen in God’s consecrated house, a parish, and something no Catholic should do at all any place. While it is true that the Hare Krishnas may not yet have come to know Jesus, nobody should have permitted them to worship Vishnu in Jesus’s house.

Only a devil would think this is fine…

Meanwhile, I have gotten some rumors reported of a parish in Los Angeles set for wreckovation, among other things, removal of the altar rail. More details to follow…

It fits the pattern, though. The altar rail separated the physical space of the sanctuary from the physical space for the commoners. It also provided an efficient way to distribute Holy Communion in a manner that afforded the faithful far better moments of reverence for Our Lord, while permitting the priest to rapidly move person to person. AmChurch ideas of “worship space” do not indicate a place set apart from the profane for the supernatural…   they don’t teach the supernatural.

The Spirit of Secular Reform Hits Japan Again, too.

Perhaps most sad to me is a report yesterday that one of the largest Catholic Churches in Japan, St. Ignatius, has removed the kneelers. Also, they have written an announcement to the faithful instructing them NOT to kneel when receiving Holy Communion. 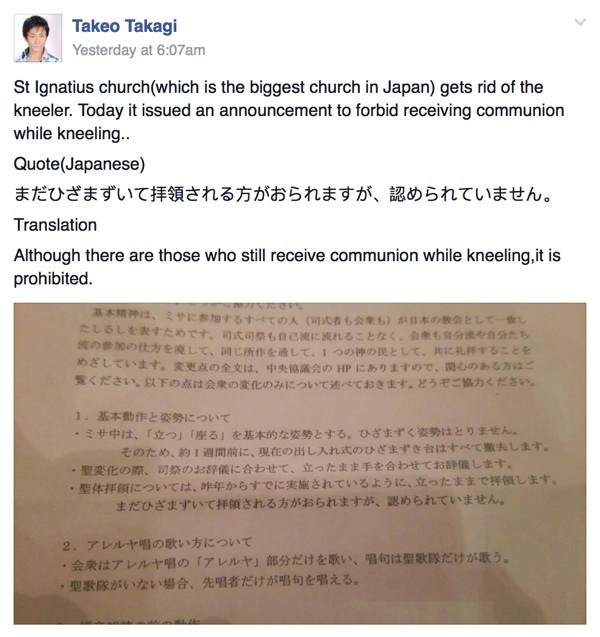 I am not fluent in Japanese by any stretch of imagination. I am also not regularly reading it, however, when I looked at the line Takeo translated, I could see it being interpreted this way, too:  “Those who still receive communion while kneeling are not welcome.”

Either way, it is not good. Either way, it represents yet another zeitgeist reemerging from the 90s:  the attack on the faithful who love Our Lord in the Blessed Sacrament.

If, at the very name of Jesus, every knee shall bend, then what ought we do when in front of His Presence?

Fatima and Akita Give the Remedy

My thoughts immediately turned to Akita when I read that news from Japan. The last time I mentioned Akita here, some seemed to suggest that the silence of the Vatican about Akita somehow nullifies the supernatural origin. That’s not how it works:  rather, the Bishop’s declaration of the supernatural origin is sufficient to permit belief until the Vatican says otherwise. (why do the Medjugorje people always proclaim the opposite?…  oh well, that would be a long digression). The bottom line is that Bishop Ito approved the events of Akita (the local bishop in Medjugorje has not).

In 1973, in response to Communion in the hand, and other changes, in Japan at that time, as well as Our Lady revealing the third secret of Fatima, and on October 13, Our Lady gave the following message to Sister Sasagawa:

“As I told you, if men do not repent and better themselves, the Father will inflict a terrible punishment on all humanity. It will be a punishment greater than the deluge, such as one will never seen before. Fire will fall from the sky and will wipe out a great part of humanity, the good as well as the bad, sparing neither priests nor faithful. The survivors will find themselves so desolate that they will envy the dead. The only arms which will remain for you will be the Rosary and the Sign left by My Son. Each day recite the prayers of the Rosary. With the Rosary, pray for the Pope, the bishops and priests.

“The work of the devil will infiltrate even into the Church in such a way that one will see cardinals opposing cardinals, bishops against bishops. The priests who venerate me will be scorned and opposed by their confreres…churches and altars sacked; the Church will be full of those who accept compromises and the demon will press many priests and consecrated souls to leave the service of the Lord.

“The demon will be especially implacable against souls consecrated to God. The thought of the loss of so many souls is the cause of my sadness. If sins increase in number and gravity, there will be no longer pardon for them.”

Earlier that year, Sr. Agnes has received a cross-shaped wound appear in her left hand, where she would take Communion in the hand.

I’ve mentioned the Rosary many times, and call it the indispensable prayer. Our Lady at Akita gave it as a direct remedy to the mess we see today. In 1973, wreckovations had not begun in earnest — we see again, such as at Church of Our Saviour, “churches and altars sacked”.

We see, especially in light of the synod, that indeed, “the Church will be full of those who accept compromises”. Consider the discussion about the Synod I posted earlier this week, an attack on grace is what I presented. They want to abrogate purpose of amendment! Is that not a compromise with a devil?

And what do you call the hare krishna stuff above?  Is it not a compromise as well?

We don’t want the punishment foretold at Akita. Our Blessed Mother warned us that even if we survive, we would envy the dead. I don’t want that. I also don’t want the wreckovations, ecumania, and I want to worship Our Lord, especially when receiving Holy Communion. But you have to ask yourself, especially when you see what that priest has done to Our Saviors parish:  Why? Why would these people continue to push these things unless they do want to force God to act?

They were pretty quiet for about 10 years, but they’ve come back. Are they running out of time?

Lord, have mercy on us. Mary, Queen of the Rosary, pray for us!

This article, Tempting Akita’s Fire: AmChurch Wreckovations, Hare Krishnas, and Tokyo St. Ignatius Removes Kneelers is a post from The Bellarmine Forum.
https://bellarmineforum.org/tempting-akitas-fire-amchurch-wreckovations-hare-krishnas-and-tokyo-st-ignatius-removes-kneelers/
Do not repost the entire article without written permission. Reasonable excerpts may be reposted so long as it is linked to this page.