Roman Journal: (A bit more than a) Mid-Point Report

Greetings all, from Borgo Santo Spirito 4:  The Curia of the Society of Jesus (see below right). Already I am following in the footsteps of the great Hilaire Belloc who broke every vow he made on day 2 of his Roman pilgrimage. Instead of giving you a daily update, I am giving you an update a bit more than halfway through the trip. I have managed to remember your intentions and all of you however–and that ought to count for something! 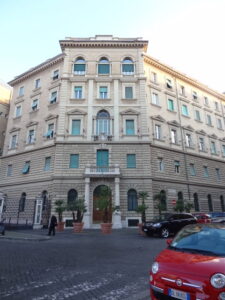 This has been a busy week and I am spending most of my time examining the Acta of the Diocesean Process of the Cause for Canonization for the Servant of God Fr. Walter Ciszek, S.J. The effort has been undertaken with the collaboration of Fr. Marc Lindeijer, S.J. Fr. Lindeijer, a Dutch Jesuit and brilliant historian, is shepherding the Cause through the process with Congregation for the Causes of Saints. He and I have been working together on the Ciszek Cause for the past year and a half. The Father General and the Curial Jesuits have been very kind and hospitable to me in my stay. The work has been very rewarding and leaves little time for exploring Rome during the day.

In addition to spending some time with Fr. Adolfo Nicolas, S.J., the Father General of the Society, I was privileged to spend time with some of the other illustrissimi of Rome. On Tuesday, I was invited to dinner with Dutch journalist Lidy Peters. She hosted an interesting dinner party which included, two Jesuits, myself, an attache to the Dutch Embassy, a French Teacher and a deacon. 75% of the mealtime conversation was either in Dutch or French. Needless to say, I drank more wine and had an extra several helpings of the pasta and clams. (In addition, I now have some material for a forthcoming spy novel that I plan to write that involves a Latin teacher caught in a web of intrigue with Dutch-speaking terrorists who are the political progeny of Cavour and Garibaldi.)  On Wednesday, I had the honor of having  a private audience with Raymond Cardinal Burke, Prefect of the Supreme Tribunal of the Apostolic Signatura. Fr. Lindeijer and I visited him at the offices of the Apostolic Signatura at Palazzo della Cancellaria. We spoke of a number of items, including the Bellarmine Forum and the Causes for Canonization of Frs. Walter Ciszek and John Hardon. His Eminence was also very kind and gave me a copy of his new book, Divine Love Made Flesh: The Holy Eucharist as the Sacrament of Charity. On Thursday, I hoofed it over to the Pontifical Oriental Institute (the Orientale) and met up with the Rector, Fr. James McCann, S.J.    Fr. McCann and I enjoyed a delicious dinner and solved the problems of the world.

In the last several days, I did manage to visit St. Mary Major and heard several Masses at St. Peter’s. As I promised, I am bringing your intentions to the tombs of the saints. Indeed, I remembered them all especially today at the tomb and altar of our patron St. Robert Bellarmine. His body is under glass for the public devotion of the faithful and is housed at the Chiesa San Ignazio. Those of you who wrote your intentions on our website were especially remembered. I also managed to have a conversation with Pasquino today, but I’ll leave that for another article. 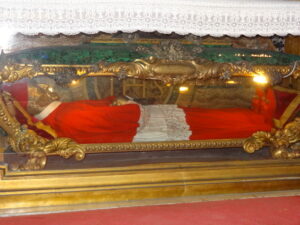 Please pray for me during these last couple days in the Eternal City. I will promise to pray for you. If you still wish to post your intentions, please do and I will remember them for you. More later. Ciao!

This article, Roman Journal: (A bit more than a) Mid-Point Report is a post from The Bellarmine Forum.
https://bellarmineforum.org/roman-journal-a-bit-more-than-a-mid-point-report/
Do not repost the entire article without written permission. Reasonable excerpts may be reposted so long as it is linked to this page.