Standing on Two Feet? Does the USCCB get Social Justice?

For years, Catholic educators have used the visual of two footprints to explain the difference between two kinds of charitable works, that is, the traditional “works of mercy” and what is, in some places, called “social justice.” This latter work is explained in different ways, depending on the degree of fidelity given material has to Church teaching. The point of the visual is that the Church recognizes two complimentary “responses” to earthly needs, both necessary to advance “the call of our faith to put love in action.”

It’s a tough sell. The exhortation for doing works of mercy is found on Jesus’ lips and draws from a unbroken tradition that reaches deep into his Jewish roots. It has been consistently taught and practiced by the Church since its inception. It is a responsibility that falls on the shoulders of every capable Christian to the degree his circumstances permit.

The work of furthering social justice, however, is a fairly new development in Church thought. During most of the Church’s history, such concerns would have relegated to people in position of authority and governance. Therefore, the social justice “foot” of charity, presented as a concern for all Christians, is particular to contemporary human history…but not inappropriate. 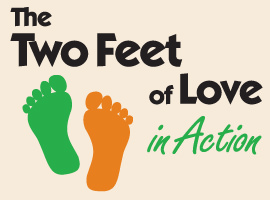 A recent incarnation of the footprint pedagogy was found in a 2012 program prepared by the United States Conference of Catholic Bishops’ Department of Justice, Peace, and Human Development titled “The Two Feet of Love in Action.”(1) It has been used by JustFaith(2) – an education component of the beleaguered Catholic Campaign for Human Development and other “charitable” programs such as Catholic Charities and Catholic Relief Services – and by various dioceses in the United States.

“The Two Feet of Love in Action” states that it is based on Pope Benedict XVI’s encyclicals Deus Caritas Est (God is Love) and Caritas in Veritate (Truth in Love)(3) and quotes liberally from each. However, the encyclical Deus Caritas Est makes no mention of social justice whatsoever and Caritas in Veritate, which uses the term twice, describes it in the context of a society commensurate with the fullness of Catholic teaching. Social justice, understood this way, is more closely linked to evangelization of the gospel than with any political position of given public policies. Works of mercy are acts; social justice is a consequence – the achievement of a society that is living by Christian values.

“The Two Feet of Love in Action,” by contrast, understands “works of mercy” and “social justice” as two different kinds of charitable acts. “Social justice,” it tells us, is “when we work to address the root causes of problems facing our communities by advocating for just public policies and helping to change the social structures that contribute to suffering and injustice at home and around the world. We walk with the Social Justice foot when we work to foster peace and justice and work for long-term change in local and global communities. We also step with this foot when we support the efforts of low-income persons to transform their communities.” (p.3)

The difficulty with this definition is that it 1) confuses the Church’s understanding of social justice, and 2) offers, instead, a particular ideological perspective – and often particular social programs – as if they were Church teaching.

For participants who are having “difficult time understanding why we must address ‘root causes’ and change ‘unjust structures’,” “The Two Feet of Love in Action,” provides three examples (p. 4):

Example 1. “On average, it costs $25,083/year for a low-income family of four in the U.S. to cover basic housing, utilities, transportation, food, health care, and child care. An adult who works 40 hours a week at minimum wage will make only $15,080 annually.”

The participant is expected to conclude that the minimum wage is therefore unjust and must, as a matter of conscience, be raised. The minimum wage described in the example above, however, is neither a “root cause” of poverty nor an “unjust structure.” A minimum wage is not intended to support the worker who is the sole breadwinner for a household.

For the problem that a head-of-household cannot support a family on minimum wage there are many solutions – of which raising minimum wage is hardly the best. Considering that there may also be unintended, negative consequences for society at large, the claim that raising the minimum wage is an act of social justice is, at best, a matter of prudential judgment. In certain circumstances, it may very well be an act of social injustice.

Example 2: “Children who have access to full-time pre-school are much more likely to have higher incomes, education levels, and socioeconomic status and are less likely to abuse drugs, be involved in criminal activities, and lack healthcare—25 years later. However, full-time preschool costs an average of $8,700 per child annually and is unaffordable to many low-income families.”

This example is even more troubling than the first because its premise that “children who have access to full-time pre-school are much more likely to have higher incomes,” etc. is only true for children from families that cannot provide the advantages of pre-school themselves. All things being equal, the pre-school child at home is infinitely more ‘advantaged”– even in a low-income family –than the institutionalized child.(4)

For the problem that families can’t care for their young children, there are many solutions – of which quality daycare is hardly the best. The claim that establishing greater access to full-time preschool is an act of social justice is, again, at best, a matter of prudential judgment.

It certainly doesn’t get to the “root” of the problem nor does it address “unjust structures.” In both examples, there are dozens of far more effective, fundamental, and more “Christian” approaches than the ones suggested.

Example 3: “The Catholic Church has consistently advocated for laws and policies to limit abortion.”

Laws and policies that limit evil don’t address its “root causes,” however, so while these are steps toward social justice, we are brought back to Pope Benedict XVI’s insistence that without linking efforts to “better society” with an understanding of the truth, and a personal commitment to that truth, these social actions are limited.

These three examples highlight the very real deficiencies of the “The Two Feet of Love in Action” and so much of what passes for charitable action as encouraged by organizations like the Catholic Campaign for Human Development, Catholic Charities, and Catholic Relief Services. It is entirely legitimate for them to broaden their focus from immediate, basic needs to more fundamental and structural “change” in so far as the changes sought are not merely small, material advantages but profound movement toward deeper Catholic reality.

The “change” being sought is never defined, however. We are told that advocacy for a raised minimum wage, greater access to full-time pre-school, and laws limiting abortion are “just” but can see, from the above examples – and others throughout the material – that authentic justice is a good deal more complicated and may, in fact, not be represented by the above, proposed actions.

Nor do the above, proposed actions really address root causes, although “The Two Feet of Love in Action” is rightly adamant that this is necessary to achieving any movement toward greater social justice. Participants are exhorted, instead, to turn to secular community organizations such as those funded by the Catholic Campaign for Human Development (p. 6) which, by their very ideological nature, understand the roots of human need from an entirely un-Catholic perspective.

Personnel at the United States Conference of Catholic Bishops have been changing and one can hope that, little by little, materials such as “The Two Feet of Love in Action” will be replaced by curriculum that more authentically reflects Church teaching.

1. The 23-page facilitator’s guide can be read at: www.usccb.org/about/justice-peace-and-human-development/upload/Two-Feet-of-Love-in-Action-Facilitator-s-Guide.pdf
2. JustFaith Catholic Version Participant Handouts for Week 7, 2011-12.
3. “The Two Feet of Love in Action,” cover, p. 1; introduction, p. 2. Further quotes from this document will be identified by page number within the article.
4. See for example: “The Influence of Preschool Centers on Children’s Development Nationwide: How Much Is Too Much?” UC Berkley Study, 2005.

This article, Standing on Two Feet? Does the USCCB get Social Justice? is a post from The Bellarmine Forum.
https://bellarmineforum.org/standing-on-two-feet-does-the-usccb-get-social-justice/
Do not repost the entire article without written permission. Reasonable excerpts may be reposted so long as it is linked to this page.